Over the years I've acknowledged the help I've received from the Tile Heritage Foundation when writing articles for my blog. I've been a member of THF since 1996 when my wife, Susan, was writing a thesis about the International Tile Company of Brooklyn, New York (1883-1891). (Scroll down to "FILES" and click on the .pdf for an article about the ITCo that she wrote.) The help that the THF staff and THF members gave her was invaluable, and we joined. I thank the THF, not only for the support given us in the past, but also for the tile honoring both Susan and myself that will be added to the Global Handprint Mural to be installed at the Tile Council of North America in Anderson, South Carolina.
. 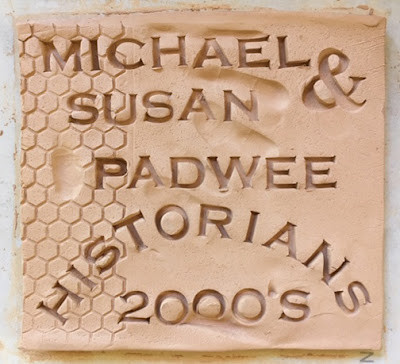 How DID Tile Heritage come to be? Thirty years ago, during the first few days of January 1987, the Tile Heritage Foundation was conceived while Sheila Menzies and Joe Taylor were driving back to California from a holiday in Arizona.

Since leaving McIntyre Tile Company two years prior, Joe had been engaged unearthing the history of California tiles, seeking information in libraries and interviewing the old timers in the industry.

Although little had been published on tiles at that point, every story we heard opened new doors that resulted in helpful discussions as we attempted to trace the origins of tiles adorning the architecture throughout the state and beyond.

It was the people we met, contractors, dealers and the tile makers themselves who encouraged both our excitement and determination to continue. Many remarked 'Let us know what we can do!'

On the 4th of January we stopped at a bookstore in Santa Barbara and purchased Anthony Mancuso’s book on forming a nonprofit organization. We then went to work preparing the necessary paperwork and submitting it all to the state and feds: we received our 501(c)(3) status six months later. For the first time in our nation there was now an organization specifically designed to research and preserve America’s ceramic surfaces. Imagine that!

Although historic information began to flow into our library from throughout the country, support through membership development was a deeper challenge. 'Flash Point,' our quarterly news bulletin first published in 1988 helped a great deal, and as we began focusing on public education, presenting annual symposiums in cities across the country, more and more people and companies joined and generously supported the Foundation.

Work with others, share with others and together create and support an American tile archive for posterity! Today Tile Heritage embodies a validation of the industry, past and present, and we have deep gratitude for the financial support of this enterprise by so many over the past 30 years.

"The Tile Heritage Foundation, founded in 1987 and having amassed information about ceramic surfaces for thirty years, is today ideally positioned to provide information and related services to the industry and to the public to assist in the preservation of these culturally significant claddings.

The Foundation’s library and research facility, open to the public by appointment, contains a large selection of books and catalogs about tiles worldwide as well as files on companies that have produced and installed tiles and architectural terra cotta in the United States during the past 150 years. In addition, the library contains “open files” on contemporary tile artists and artisans, architectural ceramists, mosaicists, and tile installers, into which information is added as received. Also, many of these “open files” have a corresponding digital file of images of work in progress as well as completed projects.

The Tile Heritage Collection, consisting primarily of historic tiles donated to the Foundation for safekeeping, represents one of the largest public collections in the country of decorative and glazed tiles from the early decades of the 20th century. These tiles, which are professionally accessioned, are available to galleries and museums for display and exhibitions as well as to the public for personal examination.

The primary goal of Tile Heritage is to assist in the preservation of ceramics surfaces: its legendary history, significant installations, as well as the objects themselves. By providing pertinent information, unbiased consultation and specific recommendations when needed, the Foundation serves both the industry and the public at large as no other agency can. The body of information on hand, coupled with expertise resulting from almost 60 years of combined experience in the field and access to a network of experts worldwide, provides assurance of both helpful and accurate answers to questions and solutions to problems.

Validation of the Art for Posterity With the development of the vision for Tile Heritage an important aspect has always been education through integration—the bringing together of all those with a vital interest in ceramic surfaces. To this end Tile Heritage opened the doorway through lectures, educational symposiums and hands-on tile and mosaic workshops. From these venues tile makers, merchants, installers, historians and collectors became linked with each other, utilizing the Foundation as a 'hub' for communication and as a resource for information about the importance of tile making in both the historical and contemporary context.

“E-News,” a periodic report online as well as the ongoing web posts to Shards ’n Snippets keeps members apprised of what’s happening at Tile Heritage as well as current events around the country. A periodical, Tile Heritage: A Review of American Tile History, is published in print from time to time as well. A Calendar of upcoming events and opportunities is maintained; a select number of workshops across the country are featured throughout the year as well.

A Virtual Tile Exhibition is posted at the Tile Heritage web site. Ongoing 'Exhibitions' will be developed as time allows featuring the Foundation’s permanent collection. The current exhibition has been promoted in industry publications and news articles. Future postings will appear in architectural and interior design publications as well.

As a not-for-profit 501(c)(3) this is YOUR organization. BECOME A MEMBER of the TILE HERITAGE FOUNDATION!" (https://www.tileheritage.org/pdfs/The-Tile-Heritage-Story.pdf)

From time to time I've mentioned exhibits where my photos were hung. Now, some retired friends and I, all members of a retirees' lunch group and all artists in different areas, have formed an artists' studio/website so that we could exhibit our work together. We named ourselves the "Inspired Retired Visual Artists" or "IRVA". IRVA also stands for our recently deceased friend, Irv Abelman, who was a member of our retirees' lunch group. We are a glass artist, a fine art painter, a watercolorist, a glass mosaicist, a sculptor of found objects, a photographic artist and a ceramic artist. Please take a look at our website: https://www.irva.studio.


LINKS TO MY PAST BLOG ARTICLES