"Three Photographers--One Family" an exhibit; and the Maison Jamaer in Brussels

"THREE PHOTOGRAPHERS -- ONE FAMILY"
An exhibit of the works of Aaron Padwee, Lynn Padwee and Michael Padwee 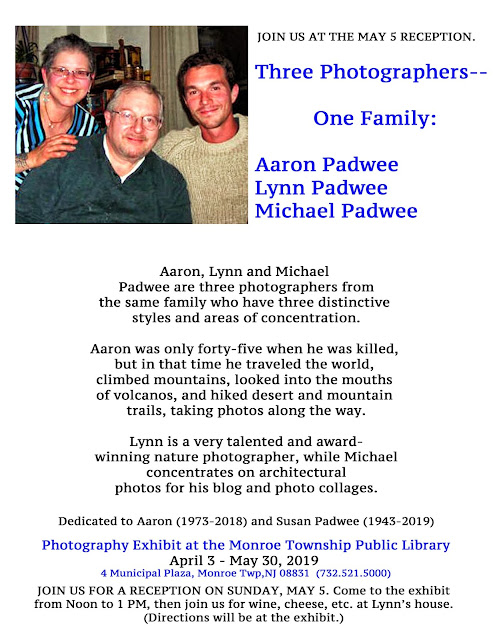 The Maison Jamaer in Brussels

In 2017 I, and other ceramic tile enthusiasts, received an email from Belgian architect Martin Vandevoorde:

"I'm an architect working in the restoration of the architectural heritage[ of] Belgium.


"Our office has followed the restoration of the Jamaer House, in Brussels.  This is a wonderful eclectic house from the 19th century.

"One of his highlights was a Minton tiles decor from 1874-1875 by John Moyr Smith and other designers.  Unfortunately the tiles were stolen before the [restoration work began].

"The new owner of the Jamaer house, Mr. Alain Blond, has found forty tiles from the sixty-one originals.  We [are helping] him to find some pictures of the last in order to reproduce them.

"An artisan can reproduce the tiles but he needs illustrations in high quality (300 dpi).  We are searching after owner[s of these tiles] who would [be willing] to scan their tiles.  Some pictures of the missing tiles are already in our possession.

"Maybe some Minton tiles have [crossed] the Atlantic.  I think about the Bethesda Terrace [in Central Park].

"The researches about the Jamaer house have allowed us to write the listing below.  The missing tiles are :

"I hope you can help us.  If not, do you have any contact information?" (email from Martin Vandevoorde to Michael Padwee dated July 6, 2017)

"The architect Pierre Victor Jamaer [(1852-1902)] obtained planning permission to build his private home in 1874. He drew up the plans himself, adopting a Flemish Neo-Renaissance style, although in his work he frequently confined himself to the Neo-Gothic style, as seen in the Maison du Roi/Broodhuis and in his restoration of the Eglise de la Chapelle/Kapellekerk. The brick walls were richly faced with blue stone, which not only highlights the joints but also enhances the plinth course, with its bosses, while the front door was given an opulent-looking oculus and the bay windows have moulded surrounds, likewise featuring bosses. Accentuating the verticality of the structure, a central wooden bow window extends over two floors, set on corbels in the form of reclining lions. It supports a loggia with a balustrade, featuring ornate wooden decoration and surmounted by a gabled double saddle roof. Inside, the architect gave particular attention to the decoration, installing a beautiful staircase with a wrought iron bannister, a Louis XVI style parlour and a Neo-Renaissance style dining room with an impressive fireplace. The preponderance of stuccowork, mosaics, decorative ironwork, polished marble and enamelled ceramics serves to create an opulent interior with a unique atmosphere. The house recently underwent an exemplary restoration process, carried out by a genuine enthusiast." ("Private house owned by the architect Pierre Victor Jamaer";  https://visit.brussels/site/en /sites/heritage/place/Private-house-owned-by-the-architect-Pierre-Victor-Jamaer)

"'The house Jamaer - that Paul-Victor Jamaer, architect of the City of Brussels, ...designed for himself - presents exceptional dimensions and some peculiarities for a period manor house: 725 square meters, ceilings to more than 4 meters, a facade nearly 8 meters wide, an elevator, five levels, a cave at the bottom of a garden of 180 square meters ... . This house represents the architecture of the late 19th century. An eclectic style, we have stone, we have a metal staircase that goes up to the top floor... . Not to mention the woodwork, moldings, period tiles, floors, wallpapers, two lions carved under the vast balcony... . In short, everything that made the grandeur of Brussels architecture', explains Daniel Ahrend, of the real estate agency Barnes... ." (a google translation of Karim Fadoul, "Bruxelles: la maison Jamaer est en vente pour 2,3 millions d'euros", 25 Juin 2018;  https://www.rtbf.be/info/ regions/detail_bruxelles-la-maison-jamaer-est-en-vente-pour-2-3-millions-d-euros?id=9955117)

"Pierre-Victor Jamaer was promoted as the architect of the city in 1847 (which he held until 1895) and he played an important role in the restoration of several houses on the Grand Place – most notably the Maison du Roi (King’s House) in the neo-gothic style." ("Brussels buildings: Maison Jamaer", WeLoveBrussels, October 27, 2016; https://welovebrussels.org/2016/10/ brussels-buildings-maison-jamaer/)

By March 2019 the restoration of Maison Jamaer was completed, and the house was repurposed as a bed and breakfast.

Martin Vandevoorde sent another email to us on March 27:

"After almost as many months as there are tiles on the walls, I'm very proud to announce to you the end of the restoration of the Jamaer House in Brussels.

"All of you have help[ed] us in our researches to resurrect a beautiful decor from the nineteenth century.  The Minton's tiles have a showroom in Brussels again." (Email from Martin Vandevoorde to Michael Padwee dated March 27, 2019)

Alain Blond, the owner of Maison Jamaer at the time of it's restoration has recently placed the Maison Jamaer on the market. Mr. Blond is quoted by the news agency RTBF as saying:

"'It is against my heart that I decided to put it back for sale', [explains Blond]..., the person who made sure that this exceptional property, left abandoned after 2009, became a lighthouse in the district... . A lighthouse as it was in 1876, at the time of its construction in an eclectic style that prefigures art nouveau. The careful restoration under the supervision of Monuments and Sites has lasted nearly five years." (a google translation of Karim Fadoul, "Bruxelles: la maison Jamaer est en vente pour 2,3 millions d'euros", 25 Juin 2018;  https://www.rtbf.be/info/ regions/detail_bruxelles-la-maison-jamaer-est-en-vente-pour-2-3-millions-d-euros?id=9955117)


LINKS TO MY PAST BLOG ARTICLES


"A Possible Early Sketch for one of Frederick Dana Marsh's Marine Grill Murals" and a new exhibit.
read more...

FOR SOME REASON I HAVE BEEN LOCKED OUT FROM REPLYING TO COMMENTS MADE ON MY BLOG ARTICLES. IF YOU WANT AN ANSWER TO A COMMENT, PLEASE LEAVE ME A WAY TO CONTACT YOU OTHER THAN THROUGH A REPLY. THANKS.
Posted by Michael Padwee at 12:00 AM
Email ThisBlogThis!Share to TwitterShare to FacebookShare to Pinterest
Labels: Aaron Padwee, Jamaer House Brussels, Lynn Padwee, Maison Jamaer, Martin Vandevoorde, Michael Padwee, Photo exhibit, Pierre Victor Jamaer, Susan Padwee