As part of a larger article about Newark's polychrome terra cotta buildings, I wrote about the history of the building at 40 Rector Street in 2015--i.e., Ballantine Brewery's Malt House #3 (built in 1860), which was given an Art Deco facade in the 1930s and later became Newark's Science High School in the 1980s.(1)


This building is described in the National Parks Service Registry of Historic Places as
"...a large, nineteenth century, former industrial building, with a considerable number of twentieth - century modifications. The 18-bay structure, varying from two to six stories, was built in a Medieval Revival style around 1860, as the Ballantine Brewery Malt House #3. Bay articulation is achieved through the use of brick pilaster strips. The eastern and central sections of the building retain their original medievalizing appearance. The western bays are harmonious in appearance, in spite of stylized Art Moderne ornamentation applied in the 1930s. Unification of design is achieved both with a continuous concrete and marble basement level, and with an ornamental brickwork facade and corbelled roofline that give the building its fortress-like appearance. Polychromatic terra cotta panels ornament the entrance on Rector Street. The building's basement contains substantial evidence of its former brewing usage, including kiln bases, drainage channels in the floor and vat settings. The three westernmost bays of the building, which are set back from the main body of the high school, were once a late nineteenth century, mansard roofed, blacksmith shop associated with the original brewery. The wing now serves as the cafeteria and kitchen of the high school.

"The building is both historically and architecturally significant. Designed by architect Charles H. Nicoll as the Malt
House Number 3, it is the oldest and largest surviving remnant of the Peter Ballantine & Sons Ale Brewery, which until c. 1912 dominated both sides of Front Street, a predecessor of McCarter Highway, at the foot of Rector Street.

"The building is also ornamented with some of the best Art Deco mosaic and detailing in the city; probably applied when the brewery was converted into a school in the early 1930s.

"In 1933, the building was taken over by Dana College, through a merger of the New Jersey Law School and the Seth Boyden School of Business. In October of 1935, Dana College and the University of Newark merged, and retained the latter name... .


"Ten years later, the school was absorbed by Rutgers University and used as a chemistry laboratory. Essex County College leased the building from 1963-1976 when it was taken over by the Newark Board of Education for the present Newark Science High School... ."(2)

"After 2005 the old Science High was abandoned. For years it was rumored that Shaq purchased the building and would turn it into luxury condominiums to accommodate the city’s newest residents. During my yearly pilgrimage through my old stomping grounds I would visit the empty art deco building, kicking away debris from the front entrance as a devotee would at her temple.

"On my last visit, in January 2017, I encountered a wire fence surrounding 40 Rector Street, a sign that the world around me was slowly morphing into something strange and new. Once I got closer to the ominous gate I saw a stunning view of the blue-green Passaic waters where there once stood tall brick walls enclosing rooms where my [S]panish and physics classes were held. The old locker room was an exposed pile of red and buff ashes. I felt exposed."(3) 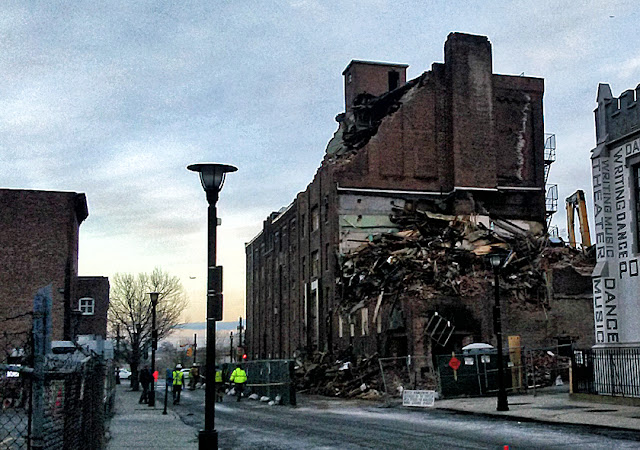 Will "Shaq Tower" and other new development projects in downtown Newark bring about a revival for all, as NBA Hall of Famer Shaquille O'Neal wanted, or just bring about more of the same wealthy gentrification that we've seen elsewhere?


Notes:
(1) The Fall 2018 Friends of Terra Cotta Newsletter also has an article about the loss of this building.

"Architectural Terra Cotta of Milwaukee County is not your ordinary building survey.  Inside are detailed descriptions on the terra cotta of nearly 200 buildings.  They discuss the motifs, surfaces, and designs, as well as give context to how and why the structures were built.  There are 350 colored photographs."

There were only 19 copies of this book left unsold in September (only 100 were printed). If you'd like to purchase a copy (US $59.95--free shipping), contact Ben Tyjeski via email (tyjeskib@gmail.com), or via his website, Tyjeski Terra Cotta Works.