Recently, we went on two tours of 1920s movie palaces in New York City. The first was a church-sponsored tour of the Loew’s Valencia Theatre in Jamaica, Queens, and the second was a tour of the Loew’s 175th Street Theatre in Manhattan sponsored by the Historic Districts Council. Both tours were interesting and informative and allowed people like myself to take photos of usually off-limits areas. Our grateful thanks to the Tabernacle of Prayer Church, the United Palace Cathedral, Mike Feitelson and the United Palace Theatre, and the Historic Districts Council.


In the middle of a block on Jamaica Avenue, near 165th Street, in Queens, hemmed in by other buildings, is a small, but amazing building facade. Built in 1929, designed by the architect John Eberson, the Loew’s Valencia Theatre, one a of a few “movie palaces” in the New York Metropolitan area, still exists in all its glory. The polychrome terra cotta and brick facade leads through a terra cotta-and-tile-decorated lobby into the much-larger theater section of the building.

For many years an elevated train ran along Jamaica Avenue, and the top of this facade could only be seen clearly from the 168th Street train station. 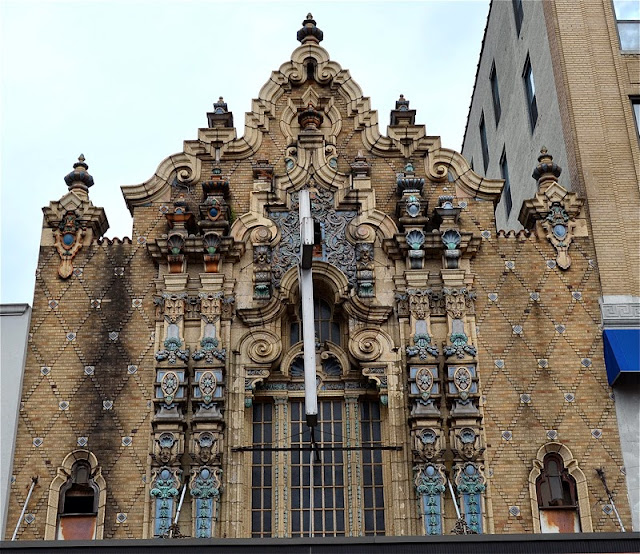 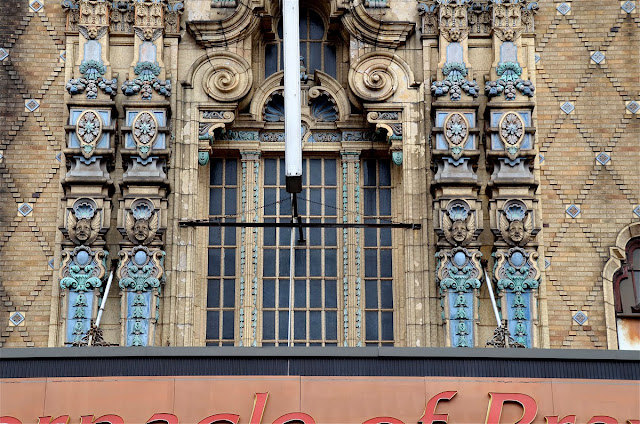 Even though dingy, the blues and reds of the terra cotta carvings snap out at the passersby. 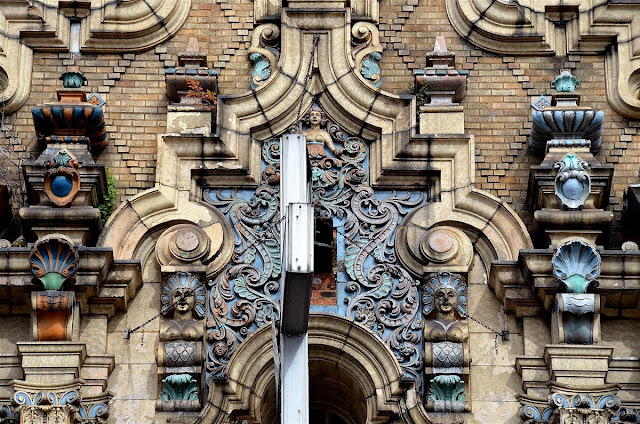 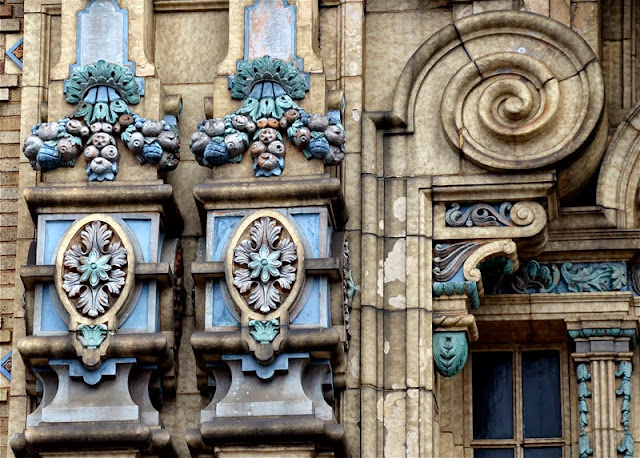 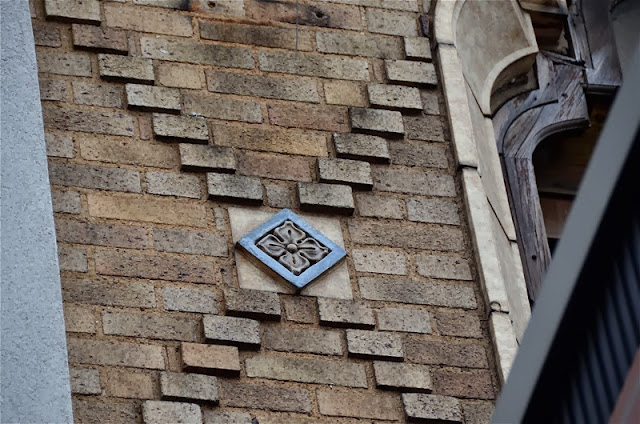 “Marcus Loew [...1870 –1927] was an American business magnate  and a pioneer of the motion picture industry who formed Loews Theatres and Metro-Goldwyn-Mayer (MGM). ...By 1913, Loew managed several theatres in New York City… . ...In 1920, Loew purchased Metro Pictures Corporation. A few years later, he acquired a controlling interest in the financially troubled Goldwyn Picture Corporation… . Loew [needed someone to manage his Los Angeles companies and] recalled meeting a film producer named Louis B. Mayer and [hired Mayer and...] his Chief of Production, a former Universal Pictures executive, Irving Thalberg. ...Loew, Mayer, and Thalberg set about to create the world's premier film studio…, [MGM].”  (http://en.wikipedia.org/wiki/Marcus_Loew) 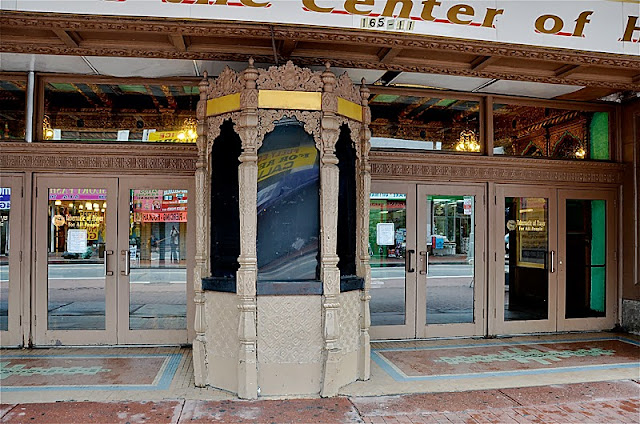 The design of the Valencia Theatre followed the classic design of an early twentieth-century movie palace.

“Among [the movie palace’s] most distinguishing characteristics were its numerous appointments, lavish decorations, and enormous size.  ...All the iconographic features of the exterior of the movie palace were designed to make the front of the theater a ‘show window’ that invited the customer to attend the performance. The most common type of entrance consisted of a broad unobstructed recessed exterior vestibule or ticket lobby which was either open in the front or enclosed behind double glass doors.

“[...This] vestibule had to provide ‘a generous and alluring glimpse of the interior' of the theater. ...The exterior and interior of the theater were lavishly decorated in a romantic but highly eclectic historic mode to distinguish it from the other buildings around it and to give it the stamp of legitimacy. With the help of materials like terra cotta and plaster, architects combined their own improvisations with exact reproductions of entire renowned buildings or parts of buildings to achieve their effects.”  (Charlotte Herzog, “The Movie Palace and the Theatrical Sources of its Architectural Style”, Cinema Journal, Vol. 20, No. 2, Spring, 1981)

John Eberson (1875-1954), the architect of the Valencia, was born in Cernauti, Bukovina in Romania. He left this rural region to attend high school in Dresden, Germany and then moved to Vienna, Austria to study at the university in the vibrant period at the end of the nineteenth century when design innovation and fantastic theatricality were part of the city's culture. Eberson emigrated to the United States in 1901… .” (http://blog.timothypflueger.com/category/john-eberson/)  The “...theaters Eberson designed during the nineteen-teens were in the conventional style of the era. However, his Wichita Orpheum and Houston Majestic of 1922-1923 started a revolution as the first ‘atmospheric theatres’. ‘Atmospheric theaters’ were in many ways the first act of the show. They sought to pull the audience from the quotidian to a suspension of disbelief and state of impressionability. On the exterior, they resembled fantastic castles or Moorish palaces. Their interiors often suggested outdoor settlings such as gardens or grottoes.”  (http://www.victoriansecrets.net/eberson.html) “While other theater architects concentrated on creating evermore lavish interiors for their buildings, Eberson set about creating lavish exterior spaces within the walls of his theaters. 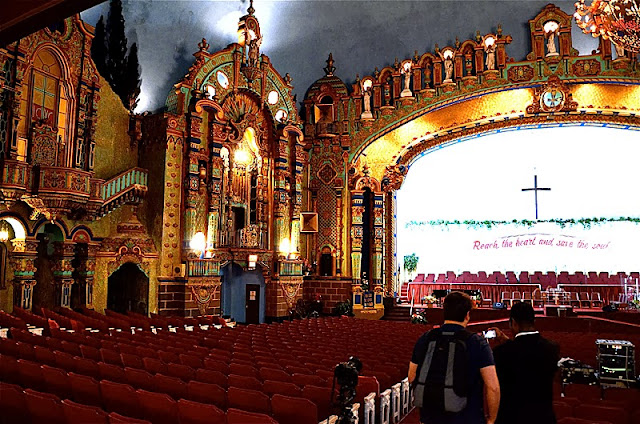 “Instead of resembling oversized palace ballrooms, Eberson's auditoria were gardens-the interior walls like building exteriors with windows, balconies and sections of red tile roof all lavishly set with statuary and flower urns. Atop the garden walls were full sized artificial trees and vines which trailed down the facades. 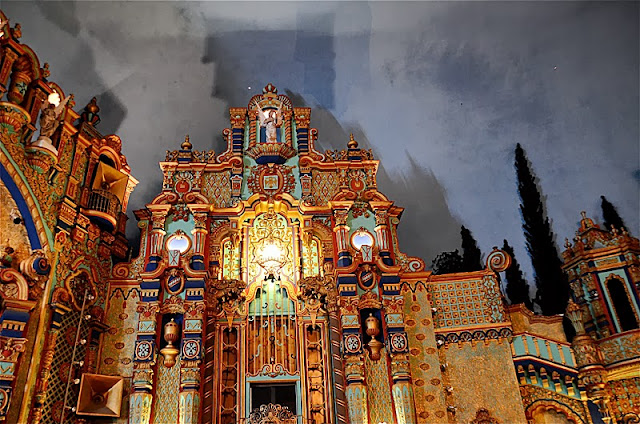 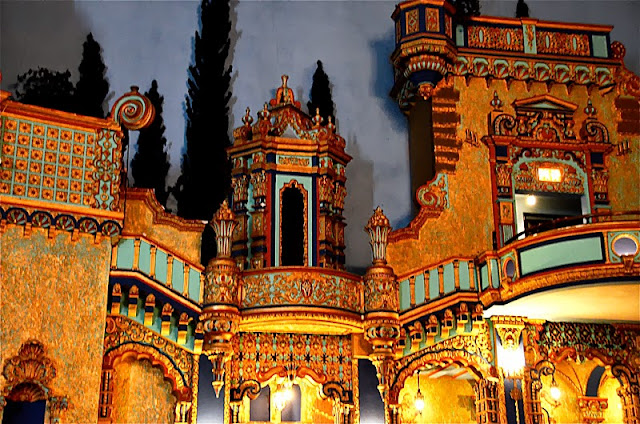 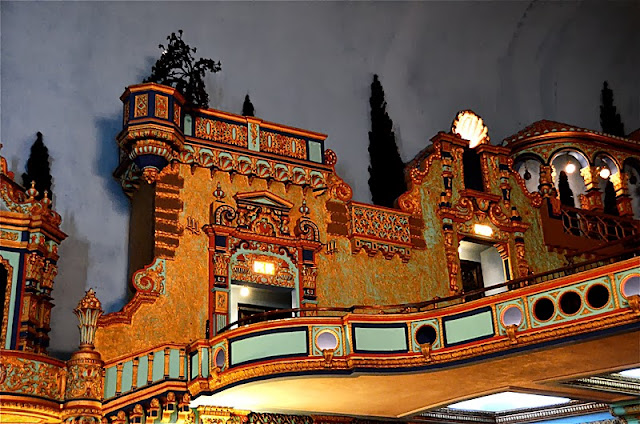 “...The ceiling of an atmospheric theater was an unornamented plaster dome painted dark blue. Tiny electric lights arranged in constellation clusters twinkled through this finite ‘sky’* and electric projectors concealed behind pavilions and fountains created, with startling realism, the effect of floating clouds.” (Craig Morrison, “From Nickelodeon to Picture Palace and Back”, Design Quarterly, No. 93, Film Spaces (1974), pp. 13,15; http://www.jstor.org/stable/4090905) In a 1926 Tampa Tribune interview, Eberson explained how he got the idea for his “atmospheric theatres”. “I have been wintering in Florida for the past several years, and it is from this state that I got the atmospheric idea. I was impressed with the colorful scenes that greeted me at Miami, Palm Beach and Tampa. Visions of Italian gardens, Spanish patios, Persian shrines and French formal gardens flashed through my mind, and at once I directed my energies to carrying out these ideas.” (Christopher Gray, “ Loew’s Paradise Is Once Again Worthy of Its Name”, The New York Times, November 19, 2006; http://www.nytimes.com/2006/11/19/realestate/19scap.html?_r=0)


*[This “sky” still twinkles in the Valencia/Tabernacle!] 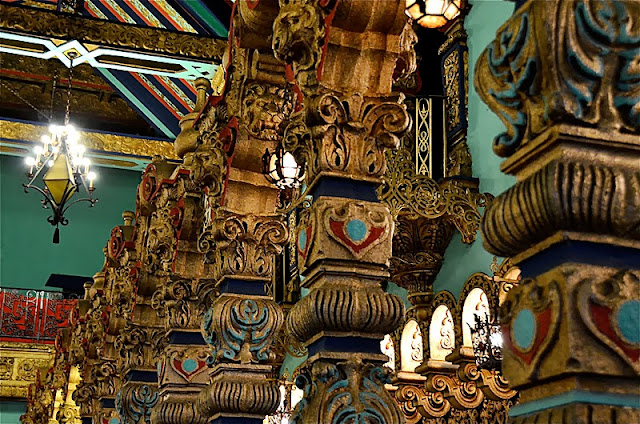 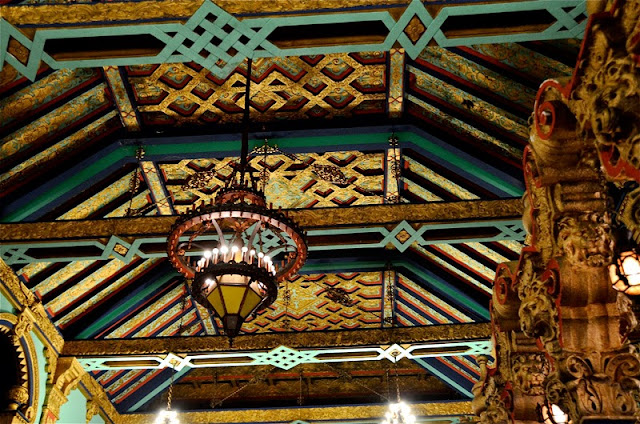 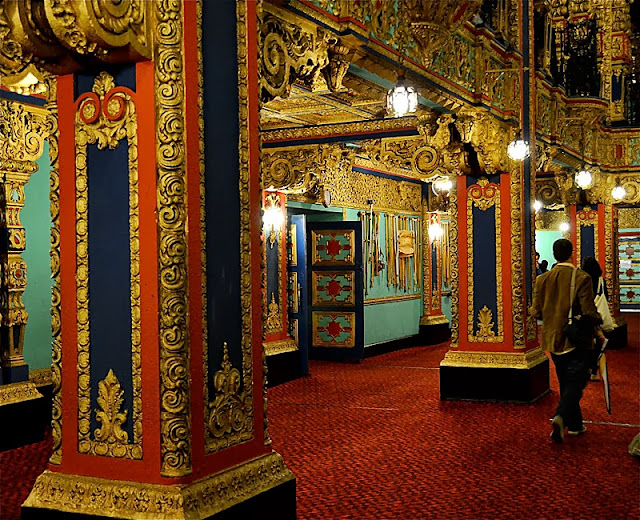 The Depression effectively ended Eberson’s “atmospheric theatre” designs, but he changed with the times. “By the time that the building climate improved in late 1935-1936, Eberson had fully metamorphized [sic] into the Fred Astaire of theatre design. His new ‘Classical Moderne’ style incorporated such art deco elements as streamlining, rounded corners, and sweeping marquees. His designs became ‘cool, restrained, and practically unadorned’, with ‘speed stripes’ and hard edges that led the eye to follow their lines. Instead of ceilings with projected clouds, his interiors featured sumptuous use of patterned color, with a bold geometrically patterned screen curtain as the individual hallmark of each theatre.” (http://www.victoriansecrets.net/eberson.html)

Although I do not know which terra cotta company made the polychrome exterior, I have been able to determine which tile company made the art tiles that adorn the walls, lobby fountain and floors of the Valencia. A number of the tiles on the walls are pictured in Norman Karlson’s Encyclopedia of American Art Tiles. 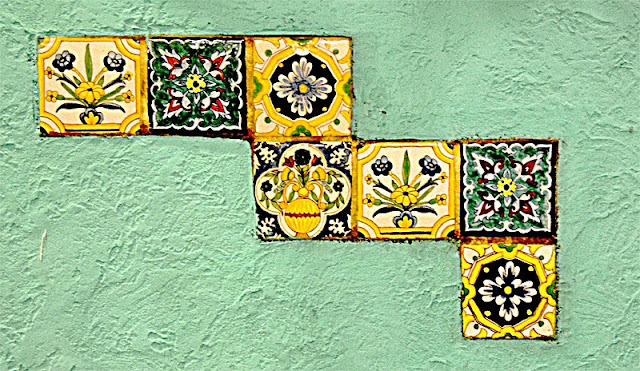 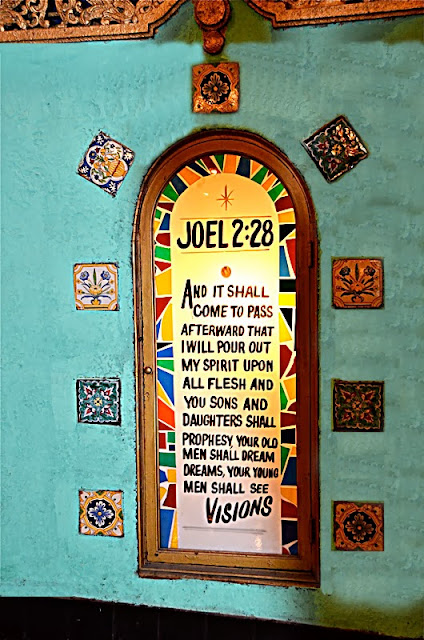 The company that made the tiles was the American Encaustic Tiling Company, which had factories in Zanesville, Ohio, Los Angeles, and Perth Amboy, New Jersey.

It was the largest American tile company just before the Depression. 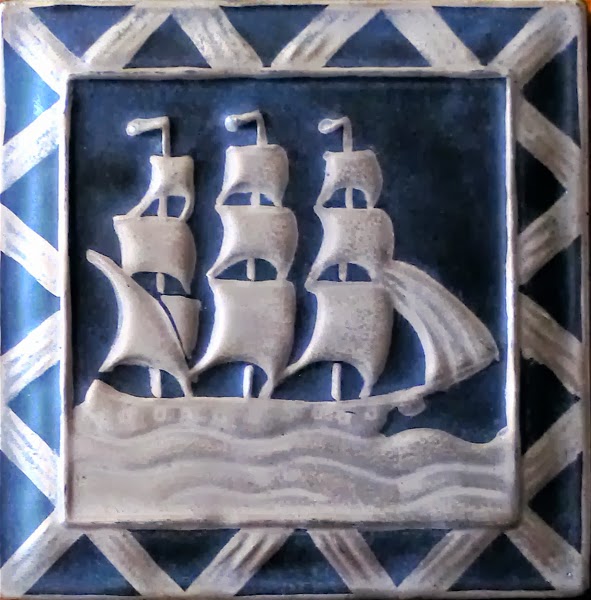 There was one tiled fountain and pool in the back lobby, 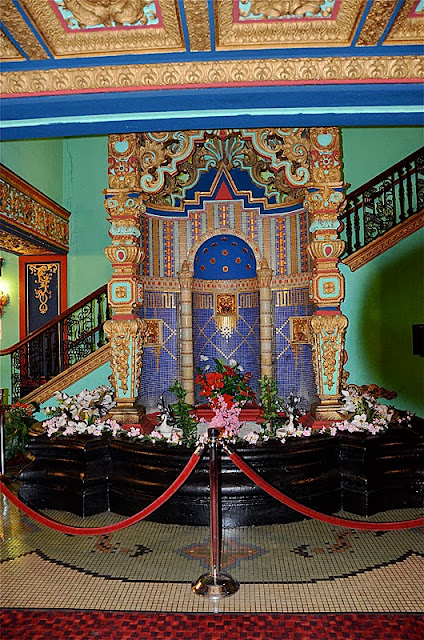 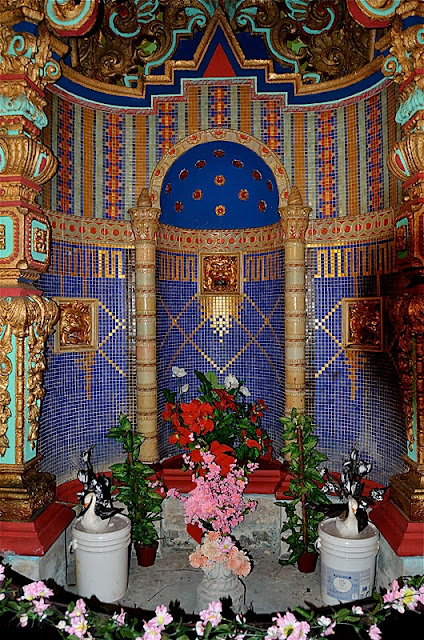 but there may also have been other, smaller tiled fountains in the back lobby and on the floor with the Men’s and Women’s rooms. These floors have tiled areas where there are now more modern fountains, or places where there could have once been a fountain or a food concession.

There is/was another “atmospheric” theatre built in Flushing, Queens, the RKO Keith-Albee Theatre, designed by Thomas Lamb in 1928, which contained thousands of Batchelder tiles and Batchelder-tiled fountains. It has lain deserted, and has been vandalized for decades, even after it was landmarked in the 1980s, then de-landmarked illegally so it could be developed. Compare the Loews Valencia as seen above with the Flushing RKO Keith’s Theatre photos:  http://www.wideimaging.com/Queens/Landmarks-Preservation/Flushing-RKO-Keiths-Theatre/8166185_DHZQqx#!i=466771971&k=gzKVjMh.


*****
I would like to thank the Tabernacle of Prayer Church, 165-11 Jamaica Avenue, Queens for preserving the exterior and interior of this historic building, and then for opening their church for architectural tours. Sister Forbes and her volunteers were very helpful and knowledgeable about the building’s history. A large thanks also goes to the Scouting NY blog which first brought attention to the Valencia Theatre and to the role of the Tabernacle of Prayer Church in the preservation of the building. It is partially because of the publicity generated by Scouting NY that the Church opened its doors to these tours.

Thanks to David Pirmann and his incredible website, NYCSubway.org, for permission to use Frank Pfuhler’s photo of the 168th Street El station from 1956. Sadly, Mr. Pfuhler died recently. And, thanks to Susan Tunick of Friends of Terra Cotta and to the Tile Heritage Foundation for their help.

UPDATE to "ERNEST BATCHELDER IN MANHATTAN"

In October I posted an article about four buildings in Manhattan that had halls and lobbys covered with tiles made by the Arts and Crafts tilemaker/designer Ernest Batchelder. (http://tilesinnewyork.blogspot.com/2013/10/ernest-batchelder-in-manhattan.html) Two of those buildings were designed by the architect Emery Roth. The Real Estate section of the 26 Jan. 2014 New York Times had an article about Emery Roth's penthouse at 210 West 101st Street, Manhattan that was for rent (over $15,000/month!). Photos showed the apartment's tiled entrance lobby: http://www.nytimes.com/2014/01/26/realestate/emery-roth-lived-here.html?_r=0. One of the rental websites had other photos including one of the fireplace: http://www.blocksy.com/nyc/rental/9304610-210-west-101st-street-ph11#/0.