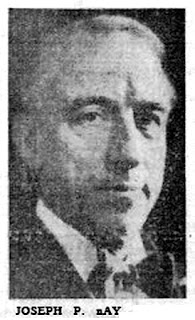 When real estate tycoon Joseph P. Day purchased an 80-or-so acre estate in Short Hills, New Jersey in 1907, he did not realize that he was ultimately leaving us all a twenty-first century legacy. “Joseph P. Day (1874-1944) was a real estate broker, appraiser and pioneer auctioneer. Born in New York City, Joseph was the son of John W. and Catherine A. Hayes Day. ...Joseph entered the real estate field when he was 21 years old. His first great real estate coup came in 1907, when he sold 2,000 lots in six of the most successful lot sales ever held in New York City. From then on his career was one tremendous sale after another. ...Over a period of more than fifty years, Joseph Day sold about one-third of the Bronx, one-third of Queens, a generous slice of Brooklyn, and vast property in Westchester and North New Jersey. He also developed San Clemente, California, a project including 500 buildings and 1,000 residences.”  (http://www.nycago.org/Organs/NYC/html/ResDayJ.html)

“Selling real estate at the turn of the century was not a highly regarded profession[..., but] Day had new and novel ideas for turning real estate into a highly respected profession and a source of considerable esteem not to mention wealth. Working from his offices in the Commerce Building at 31 Nassau Street, he began an advertising campaign with the slogan ‘Originator of the Special Sales Days' and 'Pioneer of Concentrated Advertising.’ His ads told the story: Day's company concentrated its advertising of real estate sales through newspapers, booklets, electric signs, large and medium-sized posters, special cards, large fence posters, cards in street railway cars and hand painted wall signs.” (Daniel Alef, Joseph P. Day: The Great Salesman, Titans of Fortune Publishing, Santa Barbara, CA, 2009, p. 3; http://www.smashwords.com/extreader/read/2921/3/joseph-p-day-the-great-salesman)

The Day family had two residences: 34 Gramercy Park East in Manhattan and “Pleasant Days” in Short Hills, New Jersey. “[34 Gramercy Park East, an] early luxury apartment building, which predates the Dakota, is one of the oldest in the city. Its generous apartments were advertised as "French Flats" in order to distinguish them from squalid working class tenements. In order to further enhance its marketability to upper class tenants, this Victorian red brick building was endowed with some of the features of a Fifth Avenue brownstone. Its lobby was clad in opulent materials, and its large apartments were limited to three per floor.” (http://www.nyc-architecture.com/GRP/GRP008.htm)

“Charles A. Gerlach...got the idea for a co-op apartment house on the park -- the first cooperative apartment in the city.  His 1883 Queen-Anne style building was designed by New Jersey architect George W. DaCunha.  DaCunha incorporated elaborate floral carvings, stained glass overlights, heavy leaded and beveled glass doors and other costly finishes.  The latest in residential design, the building had to entice wealthy New Yorkers who were unused to apartment living.” (http://daytoninmanhattan.blogspot.com/2010/04/no-34-gramercy-park-gramercy.html)

“Pleasant Days was [originally] built by Pierre Noel, who reportedly held on its grounds the first polo game in the country. He sold the [80 acre] property to the Feigenspan brewing family, who in turn sold it to real estate mogul Joseph P. Day in 1907. An overstoked furnace led to its destruction by fire in 1911, after which Day built a mansion on the grounds.”  (Jennifer Connic, “Local History: Pleasant Days in Short Hills”, Millburn-Short Hills Patch, September 28, 2009; http://millburn.patch.com/articles/local-history-pleasant-days-in-short-hills)

“In its heyday the Day estate consisted of a fanciful twenty-eight-room mansion, extensive formal gardens, and acres of lushly landscaped grounds. Of particular interest were the art tiles and unusual polychrome bas-relief panels that adorned the house, the service buildings, and the ornamental garden structures. [...In 1911, after the original house was destroyed, Day] assembled a team of tastemakers in the fields of architecture, landscaping, and decoration to assist him in building his dream house… . Day entrusted the architectural commission to...William Whetten Renwick, a nephew of the famous Gothic revival architect James Renwick, Jr… .” (Judith B. Tankard, “Pleasant Days”, The Magazine Antiques, Vol. 168, No. 1, July 2005, pp. 58-60)

“In 1908 Renwick designed his own house, Vine Clad, next door to the Day estate. ...Vine Clad was a prototype for the mansion Renwick designed and built a few years later for his friend and neighbor, Day. ...For [Pleasant Days’] design Renwick basically took the core of his own house...and enlarged it with wings and other enhancements...so that it assumed an asymmetrical form.” (Tankard, p. 61) The Day house was a 28-room Italianate mansion, which was approximately five times the size of Vine Clad.


“Day’s house was built of tile and stucco. ...The undulating gray-green whaleback slate roof added to its distinctive appearance, as did the unusual ornamental metope-like bas-relief panels,...which extended around the house under the overhang of the roof. The exterior was decorated with tile medallions of richly colored, glazed faience and masks manufactured by the Rookwood Pottery in Cincinnati.” (Tankard, p. 61) 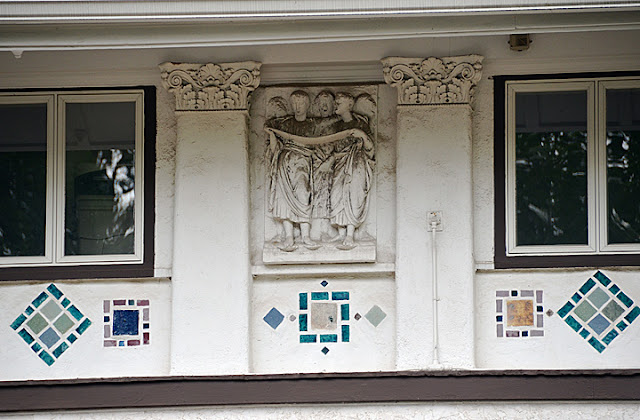 On both sides of the steps from the upper terrace in the Day formal gardens were polychrome terra cotta panels by the New York sculptor Anthony di Francisci set in the stuccoed retaining wall. (These have since disappeared.)

“One panel shows the West Wind like an infant Herakles throttling the serpents--he is engaged in combat with the dragon of the upper firmament. In this part of the world the west wind generally brings good weather… . The other panel is the East Wind symbolized by a young Ethiope riding...the legendary dolphin… . ...this figure and the flying crane suggests the birds that seek shelter before the coming tempest.” (“The Two Winds of Di Francisci”, Art World, Vol. III, No. 4, Jan. 1918, pp. 333-334)

“The whole house was alive with decorative birds and flowers… . The main reception rooms, stairwell and principal bedroom suites were decorated with Renwick’s fresco-relief panels, made in collaboration with the sculptor Anthony De Francisci… . These polychrome panels, depicting highly stylized female figures, birds, flowers and beasts[,...including the highly-acclaimed stairwell panels of the Four Seasons] were all destroyed when the house was demolished in 1949.” (Tankard, pp. 61-62) 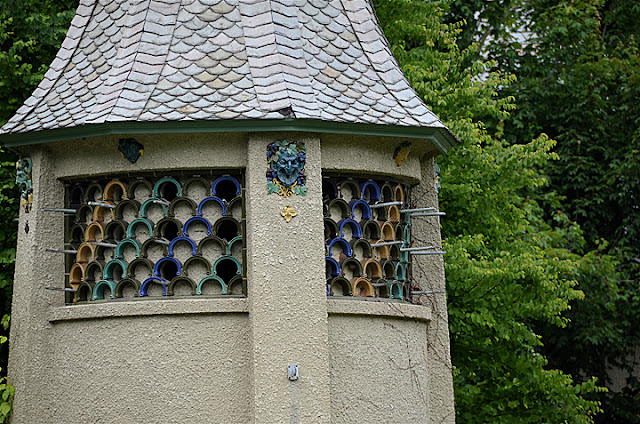 The Carriage House and the Garage are the first two outbuildings seen on the way to the new main house built in the 1940s after the death of Joseph P. Day. 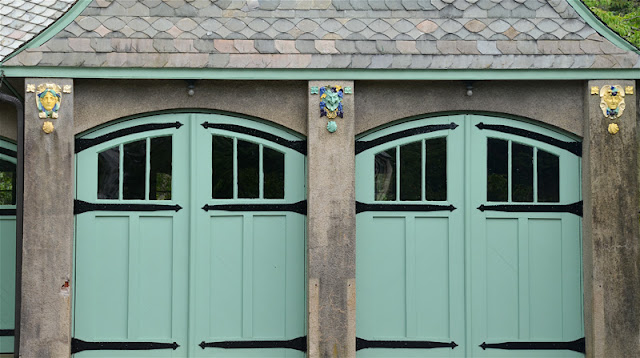 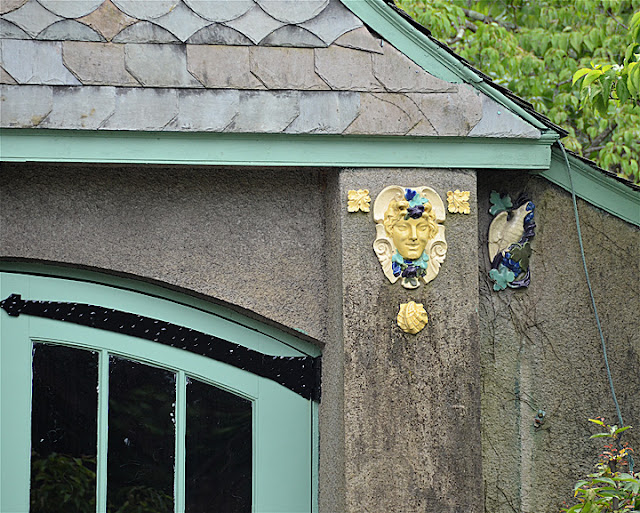  “In addition to the mansion, Renwick designed or renovated several buildings on the estate in the style of the main house. All are still standing today. All have stucco exteriors, slate roofs, and Rookwood decorations. ...Renwick also rebuilt two staff cottages, ...adorning the facades with Rookwood medallions and masks.” (Tankard, p. 62) 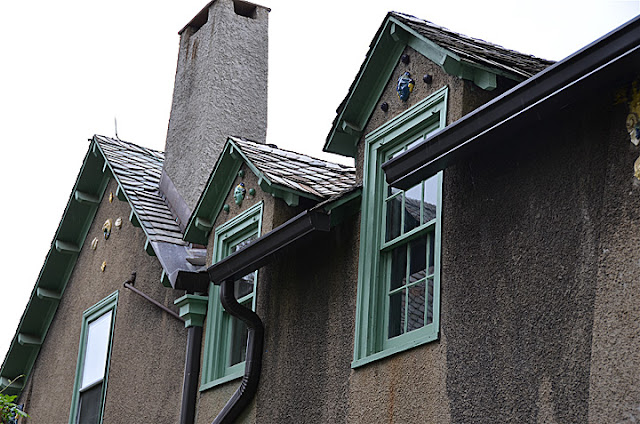 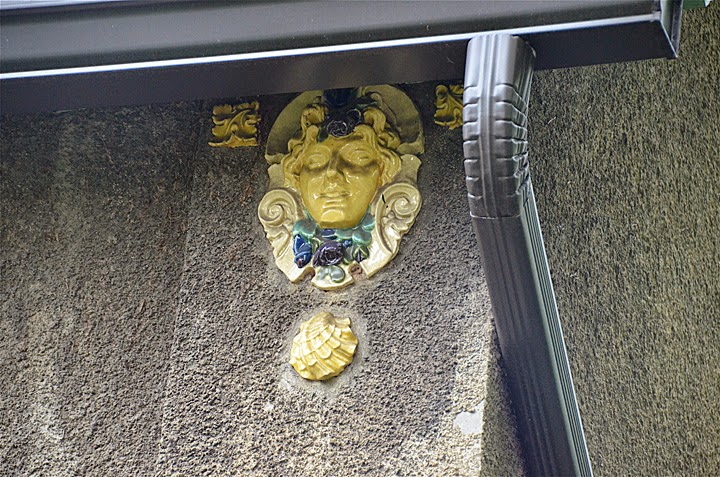 The Rookwood faience decorations on the outbuildings and cottages and in the grottoes seem to be mostly stock items from the company catalog. 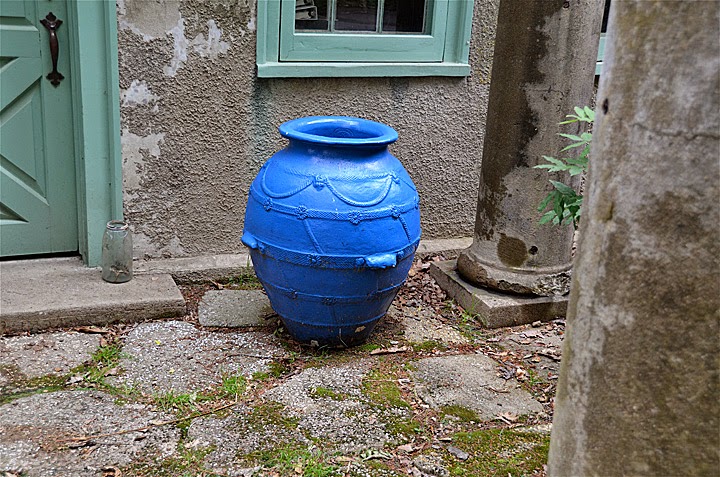 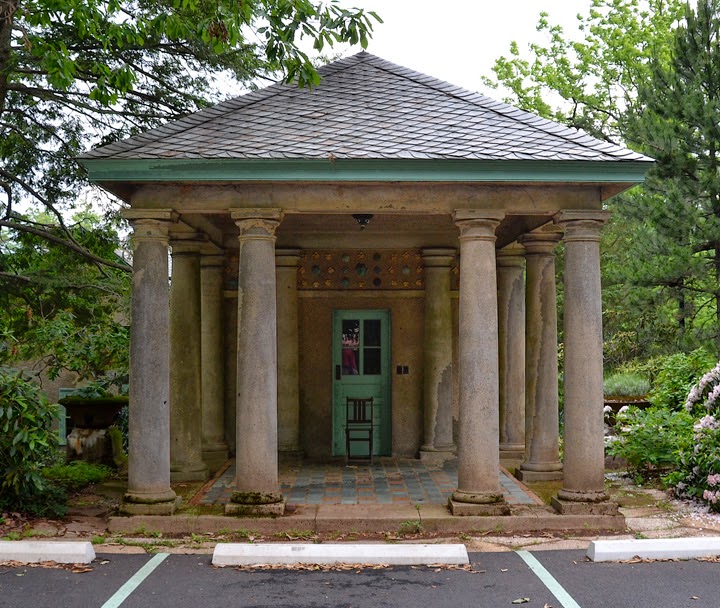 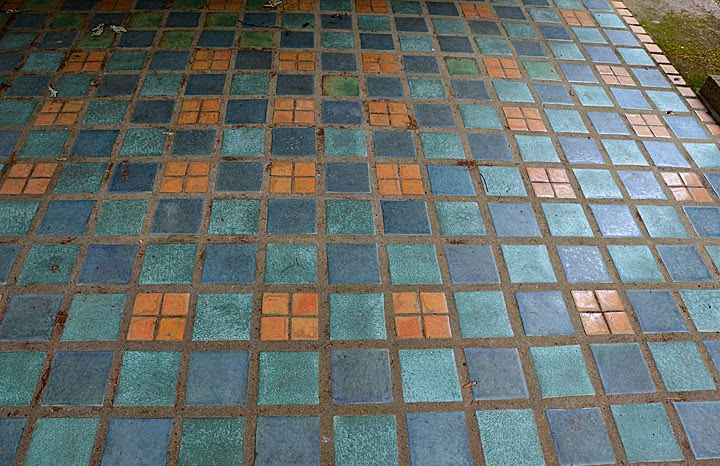 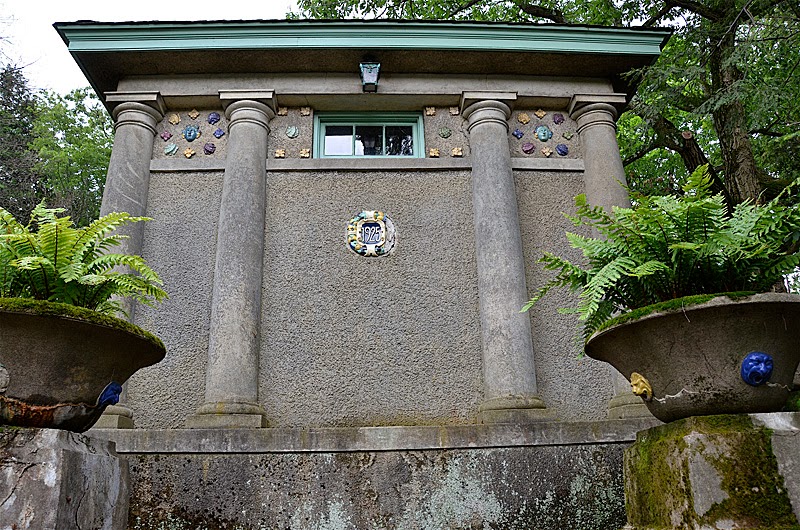 The gardens are “a unique example of the Arts and Crafts aesthetic applied to traditional, formal garden design. The strictly classical, Italian-inspired garden has axial layouts, terraces, allées, and controlled vistas. 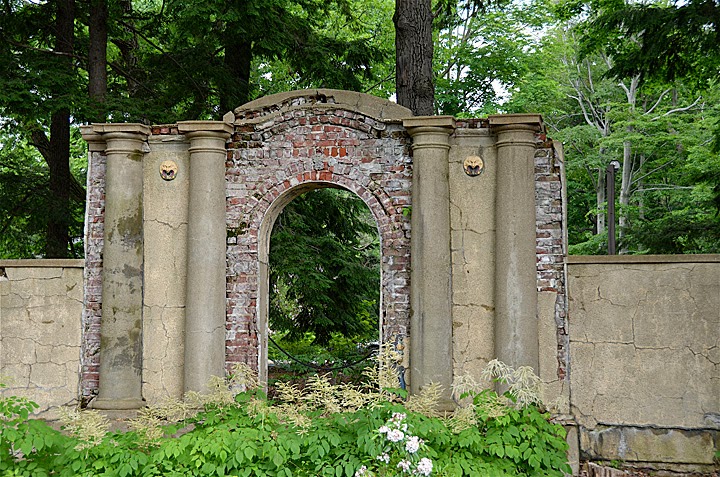 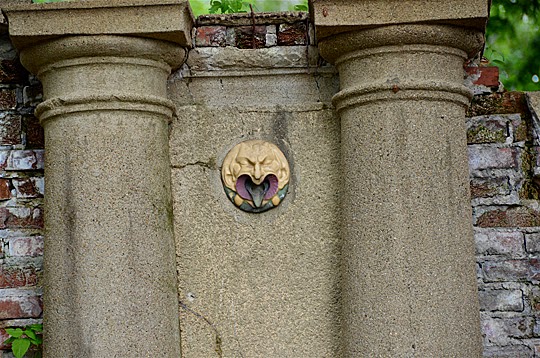 "But it incorporates typical A&C-era materials such as stone walls and grottoes, linked by informal pebble walks. Paving stones, concrete staircases, pots and decorative designs of the period stand out amidst varied plantings and long views of the Watchung Range. Cincinnati’s famous Rookwood Pottery supplied the colorful collection of fantasy tiles.” (Patricia Poore, “A Garden for Study”, Arts and Crafts Homes and the Revival, Summer 2008, pp. 78, 80)

“In 1949, Peter P. Blanchard, Jr., and his wife, Dr. Adelaide Childs Frick Blanchard, purchased the house and gardens as a country retreat. By this time, the Day house had deteriorated significantly, so the Blanchards replaced it with a smaller house in the Colonial Revival style.

"Keeping the original Day-era gardens, they added their own ornaments and plantings and changed the name of the estate to The Greenwoods. After Mrs. Blanchard's untimely death in 1956, Mr. Blanchard continued to expand the gardens. With an eye on the distant future, he reassembled the property once owned by Joseph Day that had been purchased by separate owners in the 1940s. Once again the gardens were whole. Mr. Blanchard then donated more than 48 acres of his property, including the rolling meadow that was once the golf course of Pleasant Days, to Millburn Township for the establishment of Old Short Hills Park.” (http://www.geocaching.com/seek/cache_details.aspx?guid=18fd7981-4f1f-4a1b-9abd-5afffd7a96a0) 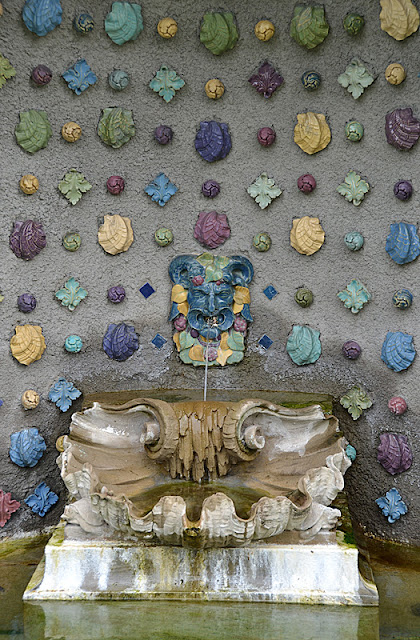 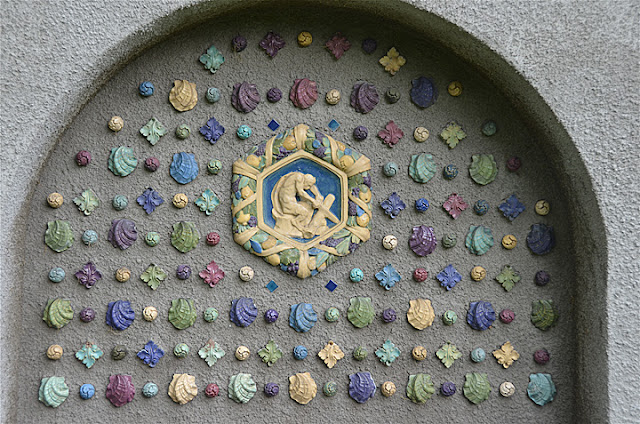 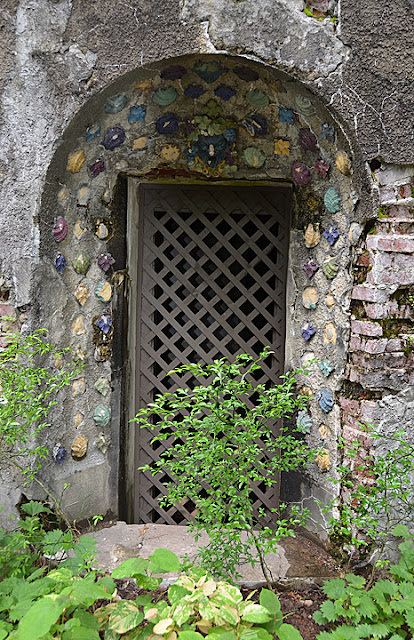 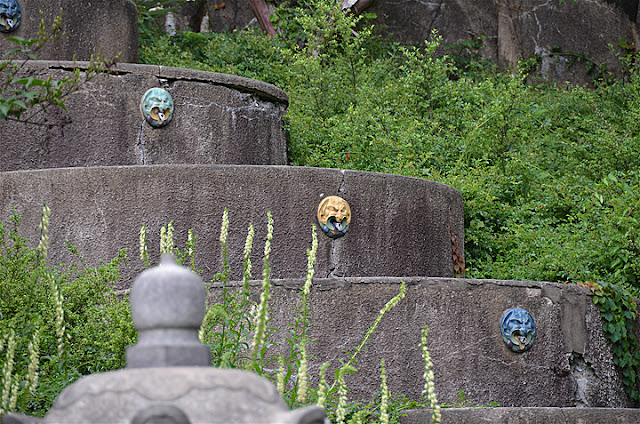  Two other outbuildings are covered shelters.


The other structure is on one side of the Garden of the Zodiac with its twelve pairs of classical columns arranged around a former reflecting pool and a bronze sculpture of a boy holding two geese, created by Emilio Angela (1889-1970). (From a Greenwood Gardens pamphlet, “Garden Guide and Walking Tour”) 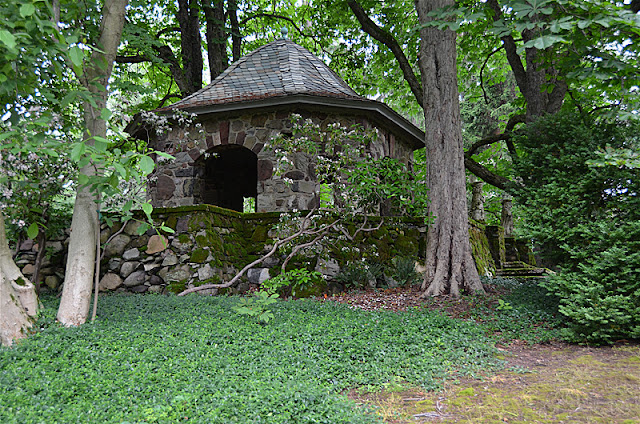 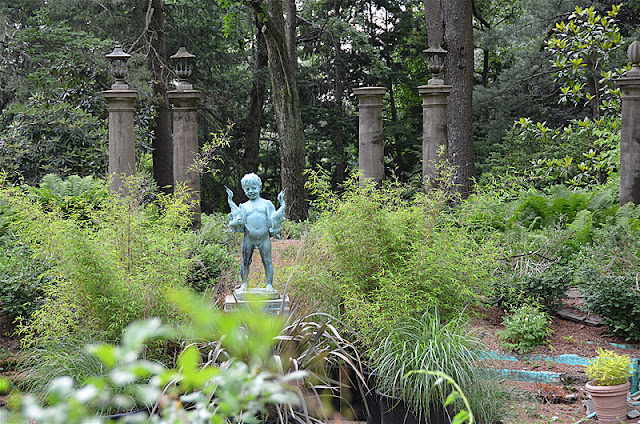 Greenwood Gardens is only a short drive from New York City, and it will be a pleasant days' outing. Check the website for when the gardens are open, and to buy tickets, before you leave home.

*****
A RESOURCE FOR LOVERS OF CERAMICS