“In 1929 and 1930, Loew's opened five ornate theaters in the New York area. One theater opened in Jersey City, the others were in the New York boroughs of Brooklyn, the Bronx, Queens and Manhattan. Each of these 'Wonder Theaters' held more than 3,000 people; they were built for both stage and screen presentations, which was the norm at that time. Architect Thomas Lamb [1871-1942] designed 180 theaters in the early part of the 20th century; one of these is the 175th Street Theater, later known as the United Palace Theater. The last of the wonder theaters, its tall steeple beckoned to movie- and theater-goers alike.” (http://traveltips.usatoday.com/history-united-palace-theater-new-york-city-58037.html)

“Loew’s 175th Street Theatre was thought to be the most elaborate of architect Thomas Lamb’s endeavors. Originally seating 3,444 when it opened on February 22, 1930, the exterior of the building is in the style of a spectacular neo-Assyrian fortress, taking up an entire city block, and has decorative features around the entire building.” (http://cinematreasures.org/theaters/44) 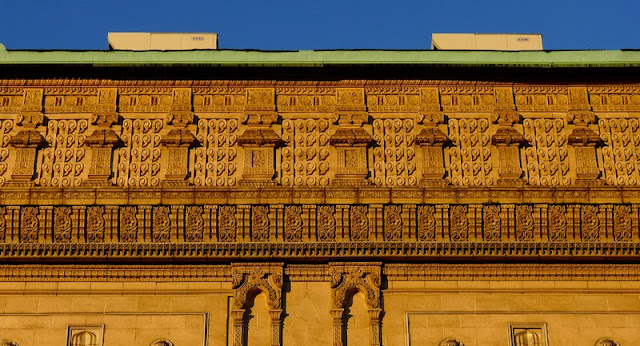 “Under a deep entablature and blind colonnade are honeycombs of stalactite stonework in an Islamic pattern known as muqarnas. ’Exotic ornaments, colors and scenes are particularly effective in creating an atmosphere in which the mind is free to frolic and becomes receptive to entertainment,’ Lamb wrote.” (http://www.nytimes.com/2001/04/13/movies/xanadus-rise-to-a-higher-calling.html?pagewanted=2&src=pm) And this began with the building exterior. 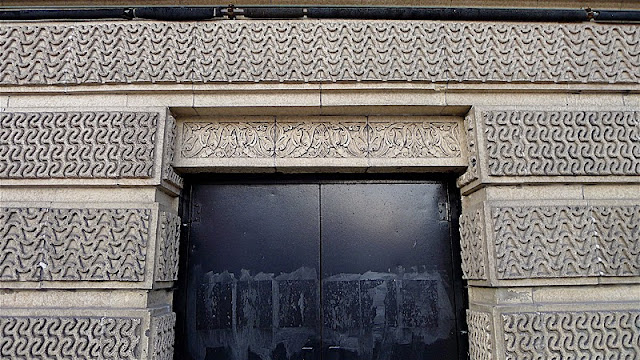 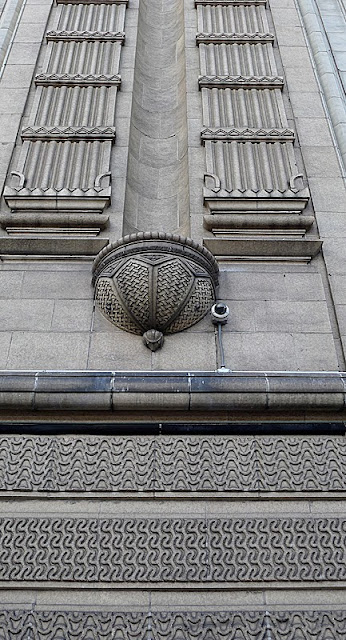 Although the exterior construction looks like concrete, it is terra cotta. However, the company that manufactured the terra cotta has not yet been identified according to Susan Tunick of the Friends of Terra Cotta.

“The amazing [interior] architecture depicts Buddhas, lions, intricate hand-carved Moorish patterns, and elephants. Everything is gilded. Beyond the elaborate foyer lies the third largest theatre in Manhattan, with 3,400 seats. It opened as a vaudeville house and movie palace in 1930… .” (http://www.indiegogo.com/projects/return-film-to-the-united-palace)

Thomas White Lamb (1871-1942) was a major architect of theaters in the United States and Canada. He was born in Scotland and was educated at Cooper Union in New York City. He worked as a Building Inspector for the City of New York, c. 1892, and he was a principal in the Thomas W. Lamb, Inc., architectural firm from c. 1911-1930s. His office was located at 36 West 40th Street, Manhattan. (https://digital.lib.washington.edu/architect/architects/519/)

"Lamb achieved recognition as one of the leading architects of the boom in movie theater construction of the 1910s and 1920s. Particularly associated with the Fox Theatres, Loew's Theatres and Keith-Albee chains of vaudeville and film theaters, Lamb was instrumental in establishing and developing the design and construction of the large, lavishly decorated...'movie palaces'...as showcases for the films of the emerging Hollywood studios. ...Aside from movie theaters, Lamb is noted for designing (with Joseph Urban) New York's Ziegfeld Theatre, a legitimate theater, as well as the third Madison Square Garden (1925) and the Paramount Hotel in midtown Manhattan. ...During the last ten years of his practice, Lamb's associate was the architect John J. McNamara.  After Lamb's death, McNamara continued as an architect of theaters under his own name. McNamara was responsible for renovating some of Lamb's older New York theaters… .” (http://en.wikipedia.org/wiki/Thomas_W._Lamb)

"The entire history of theatre architecture from the nickelodeon to the Art Deco palace is represented in Thomas Lamb’s designs. While his earliest theatres, notably the Regent, New York’s first high-class picture theatre, were in the heavy Baroque style of the vaudeville houses, Lamb soon turned for inspiration to the work of the brothers Adam, and his name became for some years synonymous with the Adam style in theatres. ...During the second half of the 1920’s, Lamb’s work became much more varied in style. In addition to the Louis XVI and Italian Baroque, this period saw Lamb [movie] houses in the Romanesque, Hindu, Persian and Chinese styles, and even in the “atmospheric” manner (gardens, stars, and cloud effects) which Lamb successfully borrowed from the architect John Eberson.” (http://www.bostonoperahouseonline.com/ThomasWhiteLamb.htm)

In a paper about design issues in the rehabilitation of historic theatres, Janis Barlow of Janis A. Barlow Associates quotes Thomas Lamb about his views on the interior decorative scheme of his theatres (1929): “To make our audience receptive and interested, we must cut them off from the rest of the city life and take them into a rich and self-contained auditorium, where their minds are freed from their usual occupations and customary thoughts… .” (http://www.barlowandassociates.com/SMOKE%20AND%20MIRRORS.htm) Lamb continues, “...it does not seem wise to bring the people directly into the full richness and intensity of the decorative scheme, so it is customary to work up to this intensity through various stages. The outer vestibules only give a faint indication of the richness of the interior, and as we pass through lobbies and foyers, the full tone of color and gold is gradually attained, the lighter colors in the vestibules and foyers; the darker and richer colors in the auditorium. It is one of the most quieting and soothing effects that can be striven for in a large interior.” (Barlow, pp. 3-4)


Harold Rambusch, of the Rambusch Decorating Company*, was Lamb’s favorite decorator, and he agreed with Lamb’s ideas about theater decoration. Barlow also quotes Rambusch (1927) in her presentation: “Our lobbies and entrance foyers are not meant to be quiet and restful places to linger. They should be bright and as prominent as possible. This is not exactly restful, but, after all, we must remember that the public passing through these rooms has just come off the street and is very much keyed up by reason of the traffic, the noises, shop windows and the like. Even a very elaborate entrance and foyer has a certain easing effect after the excitement of the street[…, and lobbies] may well be full of gold, mirrors and posters… .” (Barlow, p. 4) 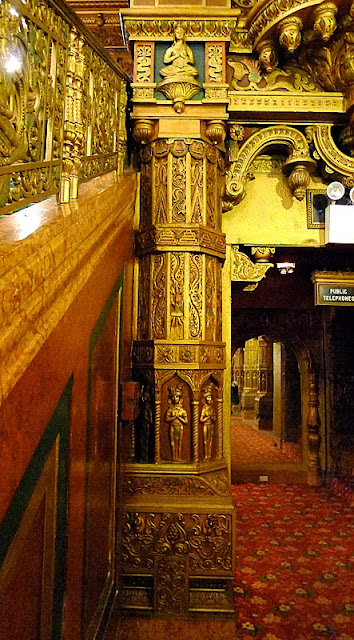 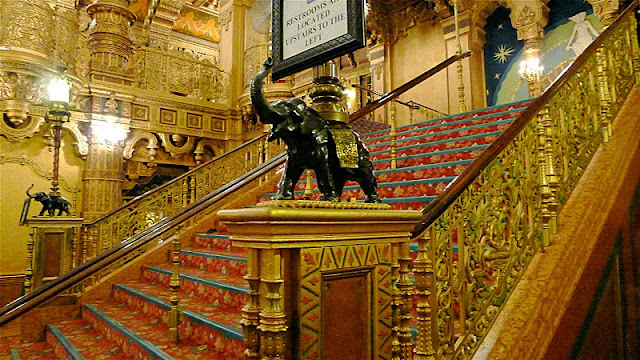 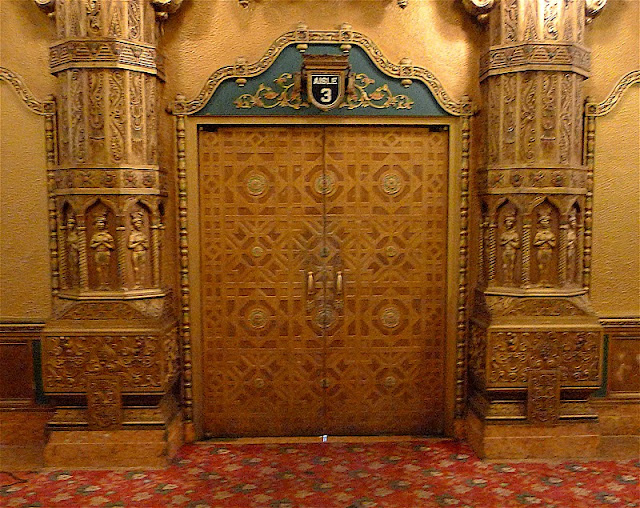 “[...Rambusch continues about the auditorium:] ‘The general tone of the auditorium must be what is technically called warm. The warm colours, as we understand them, are gold, orange, reds and tans when applied to materials or wall surfaces, and amber straw when applied to light. The metal gold has always spelled richness, not only because it is valuable but because it is pleasing to look at....and is the best means of attaining richness and warmth. Gold has another charm when used in the theatre auditorium. In these dimly lighted interiors the metal will pick up such little light as there is and make the most of it. [...The] light bounds and rebounds and gives richness without glare.’” (Barlow, p. 4) 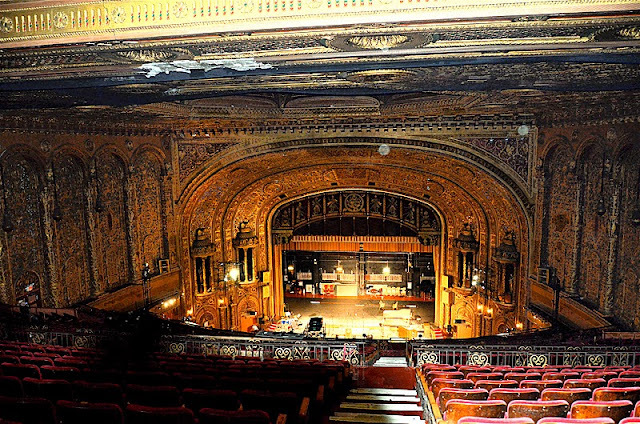 *The Rambusch Decorating Company was founded in 1898 in New York, New York by Frode Rambusch, a Danish immigrant. In the 1920s, it was the decorator for many elaborate movie palaces, including the famed Roxy Theatre and Loew’s 175th Street Theatre in New York City. 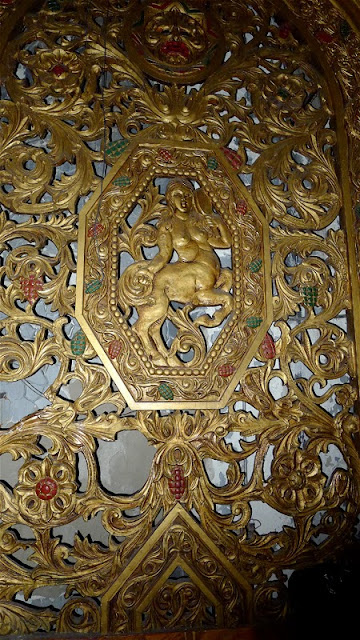 “The walls of the auditorium are embellished with Indo-Chinese decoration, designed by...Harold Rambusch, which are perforated and have an ever-changing kaleidoscope of colored hidden lights behind. The foyer features a palatial staircase leading to a grandiose, aurora borealis headed by a goddess decoration, all in the style of a gaudy Hindu temple. ...Loew’s closed the 175th Street Theatre in March 1969.” (http://cinematreasures.org/theaters/44) 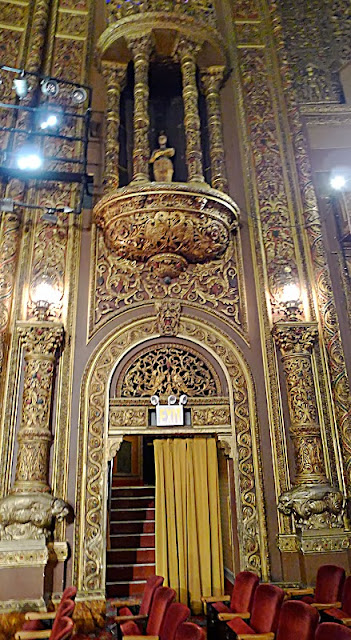 “There are lions and eagles at Loew's 175th Street Theater. But Buddhas, Bodhisattvas and elephants were also added to the mix at this 'Oriental palace of jewels.' [...This] gilded...theater chased away Depression blues with a décor that borrowed from the Alhambra in Spain, the Kailasa rock-cut shrine of India and the Wat Phra Keo temple in Thailand.” (http://en.wikipedia.org/wiki/Reverend_Ike) 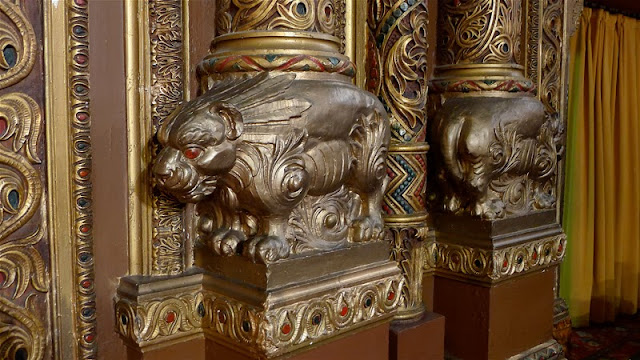 "When the original theater closed [in 1969], the United Christian Evangelical Association took over the building. Dr. Frederick Eikerenkoetter, better known as Rev. Ike*, led the United Church, as the building came to be known. He gained fame as an evangelist and preacher via TV, radio and mass meetings running the Rev. Ike Ministries… ." (http://traveltips.usatoday.com/history-united-palace-theater-new-york-city-58037.html)


*“Frederick J. Eikerenkoetter II was born in Ridgeland, South Carolina, and was of African American and Indo (Dutch-Indonesian) descent. He began his career as a teenage preacher and became assistant pastor at Bible Way Church in Ridgeland, South Carolina. After serving a stint in the Air Force as a Chaplain Service Specialist (a non-commissioned officer assigned to assist commissioned Air Force chaplains), he founded, successively, the United Church of Jesus Christ for All People in Beaufort, South Carolina, the United Christian Evangelistic Association in Boston, Massachusetts (which was his main corporate entity), and the Christ Community United Church in New York City. Known popularly as “Reverend Ike,” his ministry reached its peak in the mid 1970s, when his weekly radio sermons were carried by hundreds of stations across the United States.” (http://en.wikipedia.org/wiki/Reverend_Ike)


There is a floor with decorated tile work in the Men’s Smoking Lounge. These tiles have been identified as made by the Mueller-Mosaic Company of Trenton, New Jersey.

These 6” Flemish Faience inserts are pictured in a c.1926 catalog from the Mueller-Mosaic Company. 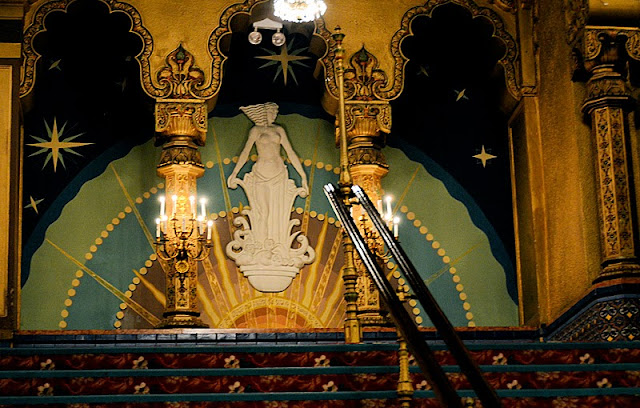 There were more tiles that clad the walls surrounding the "Goddess" statue at the top of the stairway that rises from the Lobby to the Mezzanine, and architectural and ceramics historian Richard Mohr has identified them. These are also Mueller-Mosaic tiles. 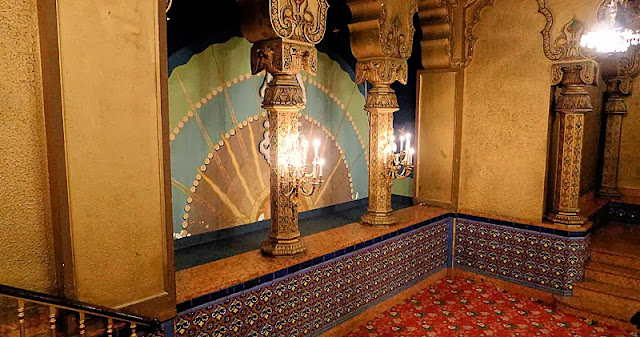 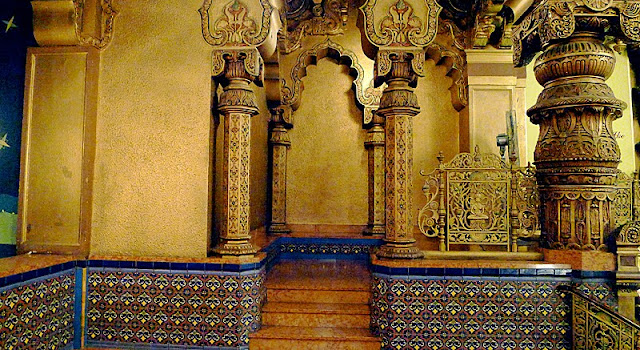 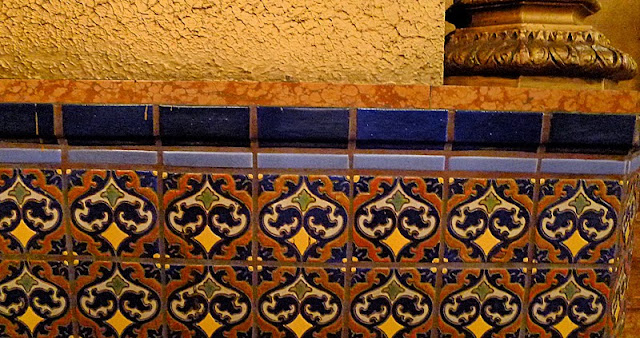 These are also pictured in a book about American art tiles by Norman Karlson.

The Mueller-Mosaic Tile Company was founded in Trenton, New Jersey by Herman Carl Mueller in 1908. "[He] was born in Germany in 1854. As a teenager he wanted to be a professional singer because he had a rich baritone voice. His parents recognized early that young Herman was artistically talented so they encouraged him at age 14 to enter the Nuremberg School of Industrial Arts instead of pursuing professional singing. There he discovered his talent and interest in sculpture, and at age 16 began his formal training at the Munich Academy of Fine Arts. When he finished school, he worked as an apprentice with different sculptors throughout Germany. In 1878, at the age of 24, he decided to emigrate to the United States of America because he heard it was a land of opportunity." (http://www.ettc.net/njarts/details.cfm?ID=1005) After Mueller emigrated to the U.S., he “settled in Cincinnati and worked for Matt Morgan Art Pottery 1882-1884 and then Kensington Art Tile Co. [of Newport, Kentucky.] In 1885 he did sculptures for the Indianapolis State House in Indiana.” (Lisa F. Taft, “H.C.M., Friend of H.C.M.: A Discussion of Herman Carl Mueller”, Flash Point, Vol. 5, No. 1, January-March 1992, p. 1) 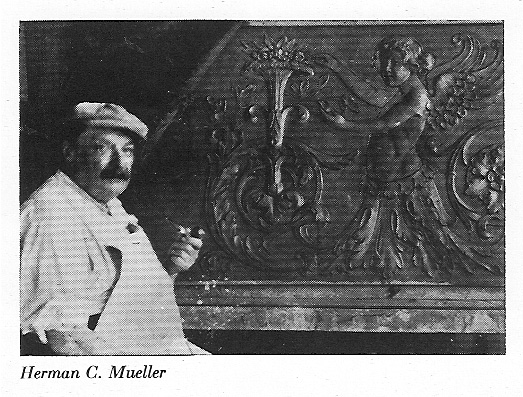 Mueller worked as a modeler for the American Encaustic Tiling Company (AET) in Zanesville, Ohio from 1887-1894. “American Encaustic’s products were at least the equal of any other manufacturer’s, except in the field of art tiles. To rectify this, [...AET] hired the talented, sculptor-mechanic, Herman Mueller in 1887. The artistic quality of the company’s tiles improved dramatically. Mueller’s fireplace surrounds and classical figure panels are among the finest art tiles ever produced." (Michael Sims, “The Tiles of Zanesville, Ohio: America’s Tile Manufacturing Center”, Flash Point, Vol. 6, No. 3, July-September 1993, p. 19)

In 1894, Mueller formed a partnership with the chemist Karl Langenbeck and others and organized the Mosaic Tile Company in Zanesville, Ohio. In 1903 he left Zanesville, and in 1908 he moved to New Jersey, another major ceramics-producing area.

I would like to thank “Bungalow Bill” Sheshko, architectural historian Richard Mohr, Sheila Menzies and Joseph Taylor of the Tile Heritage Foundation, Susan Tunick of Friends of Terra Cotta and Vance Koehler, former curator of the Moravian Pottery and Tile Works, for their help with parts of this article. Back issues of Flash Point, the newsletter of the Tile Heritage Foundation, and of Tile Heritage, the THF Journal, can be obtained from the THF website.

My photos are currently part of a group exhibit called "Generations". The exhibit runs from March 8 through June 13 at the Lakefront Gallery, One Hamilton Health Place, Hamilton, NJ 08690. My sister, Lynn, a very talented photographer of nature subjects, will also be exhibiting. (Directions from the NJ Turnpike: Take Exit 7A to I-195 West to Exit 3B (Yardville-Hamilton Square Road). At second light make a left onto Klockner Road. At the next light make a left onto Whitehorse-Hamilton Square Road. The hospital and gallery are on the left in the building with a flagpole in front.)