A pictorial blog with explanations of many British industrial and commercial shopfronts. This blog includes a section of tiled shop fronts:  https://shopfrontelegy.wordpress.com/tag/tiled/.

"Shopfront Elegy is an ongoing project by Vici MacDonald, who for many years has been photographing old commercial and industrial facades from around Britain. In 2012 she launched a blog called Shopfront Elegy, which featured one of these images every day. The Shopfront Elegy books further curate this collection of over 30,000 images into a series of themed volumes, ranging from Grimness to Grandeur.

"An overview can be found in this first volume, Shopfront Elegy: Sampler. Photographs from the project can also be found alongside poems by Tamar Yoseloff in the chapbook Formerly (Hercules Editions, London, 2012), which was shortlisted for a Ted Hughes Award and exhibited at the Saison Poetry Library in London’s Southbank Centre.

"Vici MacDonald is an editor, designer and writer based in London, England. She has authored a monograph on Australian sculptor Rosalie Gascoigne, renowned for her poetic assemblages of found text (Regaro, Sydney, 1997). In 2007 she was a founding editor, with publisher Steve Bush, of contemporary art magazine Art World. In 2012 she and poet Tamar Yoseloff co-founded Hercules Editions, a small press combining poetry and imagery. Other publishers and publications she has worked for include Penguin Group, Faber & Faber, Oxford University Press, Smash Hits and The Art Newspaper."

In my original article about the ceramic art of mid-century modern artist Jean Nison, I showed some photos of Nison's tiled table in the Lippincott House in Scarsdale, New York, which was featured in the September 1953 House Beautiful magazine.


This was not the only tiled furniture that Nison created during her career as a ceramic artist, and which I've discussed before. In a photo shoot of a stained glass window made by Nison's ex-husband, Robert Pinart, for her Greenwich Village townhouse, one photo shows part of a tiled coffee table that Nison made for her own use.

We also know of two instances where Nison designed tiled church "furniture" in collaboration with Robert Pinart, who designed stained/dalle de verre glass windows for the churches. The first project was for the Shepherd of the Hills Lutheran Church in Berkeley, California and consisted of a tiled altar and a tiled baptismal font. 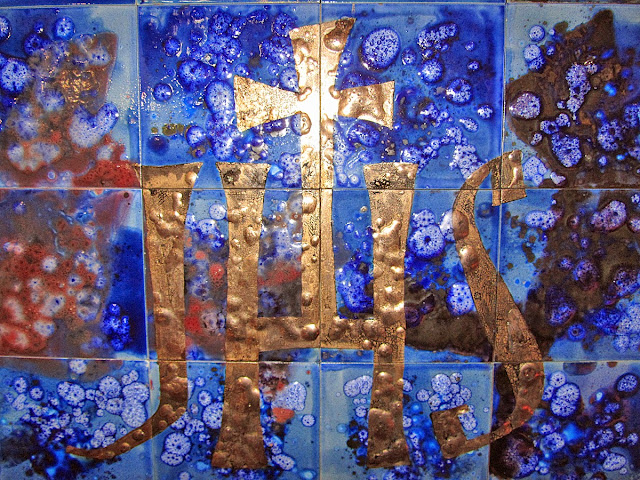 The second church furniture project was for the St. John the Baptist Catholic Church in Hillsdale, New Jersey (1969). Jean Nison designed a metal sculpture on a mosaic tile base for the Nave. The sculpture, called the Tabernacle, where the Eucharist is kept in reserve, was fabricated by the Columbia Art Metal Works of Newark, New Jersey. (From an unpublished book manuscript, The Glass Art of Robert Pinart: An Annotated Listing, working title, ©2016, 2017, 2018 Susan Ingham Padwee and Michael Padwee.)


And recently, we have been told of a set of three, tiled stacking tables which were either made by Nison, herself, or were made specifically for her tile installations. The tables are the property of Neil Schwartzbach, whose parents bought them for their home in the 1950s. It is not known where these tables were originally sold.

I am certain that Jean Nison created other tiled furniture during the 1950s and 1960s. If any of the readers of this blog come across other pieces of Nison's tiled furniture, please let me know. (tileback101 "at" collector "dot" org)


"A Possible Early Sketch for one of Frederick Dana Marsh's Marine Grill Murals" and a new exhibit.
read more...

FOR SOME REASON I HAVE BEEN LOCKED OUT FROM REPLYING TO COMMENTS MADE ON MY BLOG ARTICLES. IF YOU WANT AN ANSWER TO A COMMENT, PLEASE LEAVE ME A WAY TO CONTACT YOU OTHER THAN THROUGH A REPLY. THANKS.
Posted by Michael Padwee at 12:00 AM
Email ThisBlogThis!Share to TwitterShare to FacebookShare to Pinterest
Labels: Alan Dein, church furniture, Jean Nison, Neil Schwartzbach, Padwee, shop fronts, Shopfront Elegy, storefronts, tiled furniture, tiled table, Vici MacDonald