Over the past few years my wife and I have been able to explore areas of Newark, New Jersey with friends, who lived there and are architectural junkies like ourselves. What follows is a forshpeis--an appetizer--of Newark’s architectural past.

Although parts of downtown Newark and its buildings are being rebuilt and repurposed, this theater at 195 Market Street, a half block from the intersection of Broad and Market Streets, the heart of “downtown”, has been deteriorating for years. "The Paramount Theatre opened on October 11, 1886 as H.C. Miner’s Newark Theatre. It was originally a vaudeville house[, and after...] Miner’s death in 1900, his surviving relatives retained ownership of the theater for several years until its sale in 1916 to Edward Spiegel, the owner of the nearby Strand Theatre. Spiegel also purchased the building next to the theater with the intent to use the space to expand the theater. To accomplish this he hired famed theater architect Thomas W. Lamb* to do the alterations." (http://afterthefinalcurtain.net/2011/09/28/the-newark-paramount-theatre/; Matt Lambros, "The Newark Paramount Theatre" in his blog, After the Final Curtain, September 28, 2011)

"In 1917, ...Lamb remodeled the theatre in an Adam [or Adamesque] style. The former Paramount Theater still boasts the vertical ‘Paramount’ sign, as well as the ‘Newark’ marquee. The Paramount Theater was closed on April 1, 1986. Although a retail store operated out of the former lobby until around April 2011, a store employee confirmed that behind the drop ceilings and walls remains much of the old theater, complete with stage area and balcony seating intact." (http://cinematreasures.org/theaters/4603)

*[Thomas W.Lamb [1871-1942] was born "...in Dundee, Scotland, [...and] came to the United States at the age of 12. He studied architecture at the Cooper Union school in New York and initially worked for the City of New York as an inspector. His architecture firm, Thomas W. Lamb, Inc., was located at 36 West 40th Street in Manhattan... . Lamb achieved recognition as one of the leading architects of the boom in movie theater construction of the 1910s and 1920s. Particularly associated with the Fox Theatres, Loew's Theatres and Keith-Albee chains of vaudeville and film theaters, Lamb was instrumental in establishing and developing the design and construction of the large, lavishly decorated theaters, known as 'movie palaces', as showcases for the films of the emerging Hollywood studios." (http://en.wikipedia.org/wiki/Thomas_W._Lamb)  Lamb designed 180 theaters in the early part of the 20th century. I have written about one of Lamb’s “atmospheric” theaters in New York City here.] 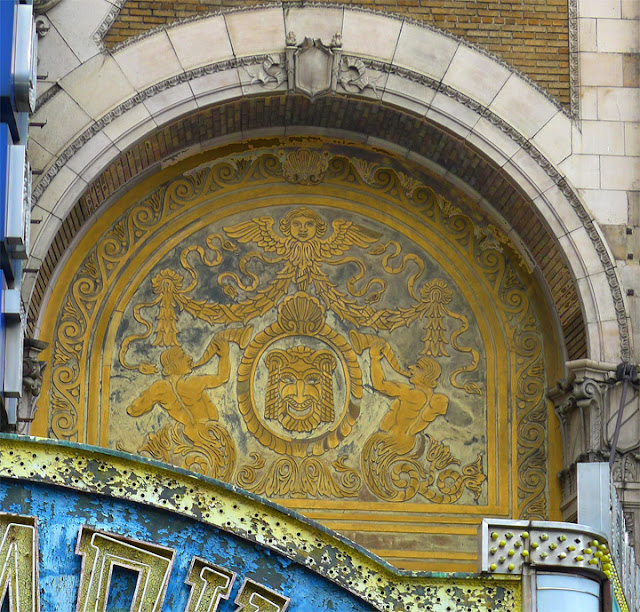 This building was originally designed “by architect Charles H. Nicoll as the Malt House Number 3, [and] it is the oldest and largest surviving remnant of the Peter Ballantine & Sons Ale Brewery, which until c.1912 dominated both sides of Front Street, a predecessor of McCarter Highway, at the foot of Rector Street.” (National Register of Historic Places Continuation Sheet, “Military Park Commons Historic District, Newark, Essex County, NJ”, Section 7, Page 25, May 10, 2004)


In the 1930s the building was remodeled and an art-deco terra-cotta facade was added. The building is also ornamented with some of the best Art Deco mosaic and detailing in the city. The terra-cotta was made by the Atlantic Terra-Cotta Company of Perth Amboy, New Jersey. "[This] building...later became part of the state university system and a library. The city bought the property and opened Science High School in the mid 1980s. It has been empty since 2006."
(http://www.nj.com/business/index.ssf/2013/09/shaquille_oneal_booker_newark.html)


In 2009 there were plans to convert this building into new housing by a consortium led by basketball star Shaquille O’Neal. “The façade and decorative entryway of the roughly 120-year-old building will be preserved and a 23-story glass-and-steel tower will rise behind it with sweeping views of the Passaic River and downtown Newark.”
(http://www.nj.com/business/index.ssf/2013/09/shaquille_oneal_booker_newark.html)


The development project was put on hold for a few years after a false ground-breaking in 2013, and has only very recently obtained funding. "Following the approval of a 30-year tax abatement and a false ground-breaking in 2013, Boraie Development is now expecting to begin construction on a 26-story, 169-market-rate-unit mixed-use building at 40 Rector Street, in downtown Newark, a few blocks north of Penn Station.


"The existing six-story building will expand, and 8,500 square feet of retail will be located in the base. According to NJ Advance Media, Goldman Sachs is financing the majority of the project, dubbed One Riverview… ." (Reid Wilson, "26-Story, 169-Unit Mixed-Use Project At 40 Rector Street Lands Financing, Newark",  August 20, 2015, New York YIMBY; http://newyorkyimby.com/2015/08/26-story-169-unit-mixed-use-project-at-40-rector-street-lands-financing-newark.html)

“Hardly anyone gives a second thought anymore to the towering old faded hulk of a building on Newark's Broad Street with the word Griffith carved over the entrance, the doors locked and the 17 floors vacant and wrecked. You'd never know that from the late 1920s to the late 1950s it was a high-priced address for professionals, a bustling architectural jewel that was the headquarters for the Griffith family, sellers of pianos, organs and other musical instruments in a time when no home was complete without one. More importantly, it was the beating heart of music and culture in New Jersey, home to the Griffith Music Foundation, the phenomenal creation of one woman who almost single-handedly put the state on the map in the world of classical music...Lena Donaldson Griffith -- more commonly known as Mrs. Parker O. Griffith... .” (JoAnne Sills, “Newark's forgotten music center”, November 23, 2008;
http://www.nj.com/news/index.ssf/2008/11/_griffith6_lena.html)


In 1926 the Griffith Piano Company signed a contract to build a twelve story building on the site of its current two buildings. “George Elwood Jones*, of Newark, has been selected as architect of the new building, which will be in the Italian renaissance
style with a front of limestone for the first three floors and the remainder of brick and architectural terra cotta.” The new building is expected to be completed in 1927. (The Music Trade Review, May 22, 1926, p. 17) The polychrome terra cotta is found on the thirteenth and fourteenth floor facades which have “three sets of two-story recessed arches... . The recessions, decorated with glazed and colored ornament, have window surrounds with white-ribboned and colored fruit bands, marble spandrels with central medallions containing fleur-de-lis designs, and yellow and green central twisted columns with foliaged and lineaged work of yellow and blue. The center panel retains a central medallion which protrudes to its column’s base. The facade is topped by a band identical to that found at the twelfth floor sill level. Above the band is a parapet [with] central urns.” (National Register of Historic Places--Nomination Form, “Griffith
Piano Company Building, Newark, New Jersey”, May 24, 1984, Item No. 7, Page 1)

*[George Elwood Jones (1886-1952) was known as an architect of large apartment houses. Jones was the “...designer of the Federal Trust Company on Commerce Street and the Academy Building on Academy Street [in Newark], within the [Four Corners Historic District], and the Griffith Piano Company building north of the district.” (http://www.livingplaces.com/NJ/Essex_County/Newark_City/Four_Corners_Historic_District.html)]

Another application of Art Deco terra cotta can be found on an otherwise nondescript building in a manufacturing and warehouse district of Newark.

Even though the facade says “Founded 1893”, I could find no architectural information about this building. It now contains a number of small warehousing and manufacturing businesses. 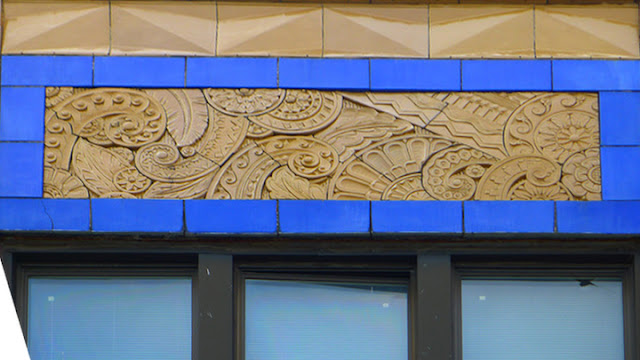 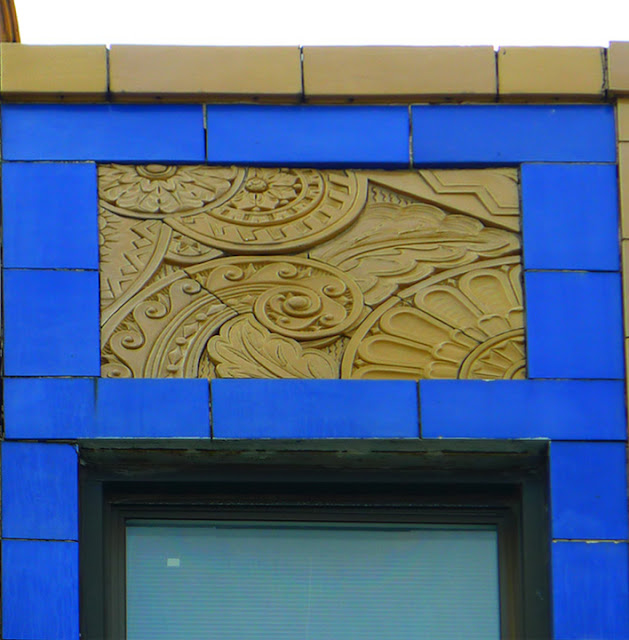 Among a string of drab buildings, the bold blue coloring of 457 catches the eye.

“In 1895, after witnessing progressive reformers wrest increasingly valuable land from developers in Manhattan for the creation of Central Park, similar forces were leveraged to form the Essex County Park Commission, and make space for Newark’s own Branch Brook Park.  The prolific firm of Fredrick Law Olmsted designed both. [...As] the park system stretched across the county, the repurposed saloon at 60 Clifton Avenue which had been serving as the administration’s headquarters, as well as home to priceless archived documents, soon proved inadequate. Relief came in 1914 with an infusion of $100,000 into the Parks Department’s budget.


“Enter Harold van Buren Magonigle, a New Jersey born Architect...known for designing the [Maine] monument at Columbus Circle in Manhattan as well as the seal of the AIA. ...Magonigle deftly drafted plans for a squat, handsome brick building in the latest style of Second Renaissance Revival. The new space included more and better appointed offices, a garage extending across the entire basement level, a drafting room, as well as a much needed fire protected archive. All of this was topped by a hipped roof with wide eaves of red metal tile. Directly beneath is a band of friezes consisting of allegorical depictions of nature, painted by Magonigle’s wife.” (Nicholas Dingman, “Archi Awareness: 115 Clifton Avenue”, The Archi, 31 July 2013; http://nicholas-dingman.blogspot.com)

The building was completed in 1916, and the terra cotta on the facade was made by the O. W. Ketchum Company of Philadelphia. 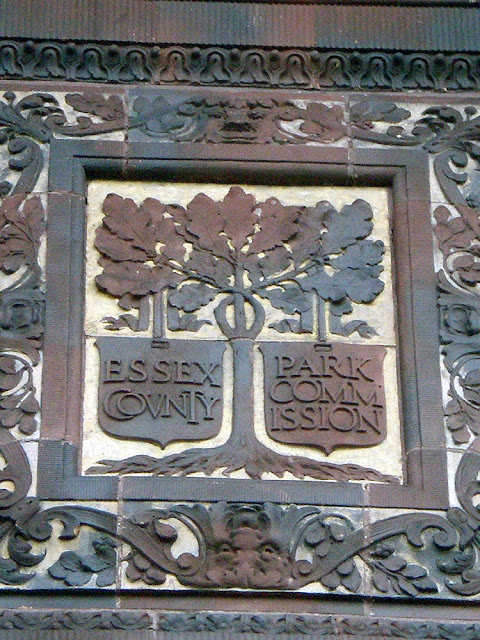 Most interesting, however, is the frieze of surrealistic frescoes painted by Edith Day Magonigle that ornament the area just beneath the building’s eaves and over the area of the main entrance. It is amazing that most have survived the past one hundred years. 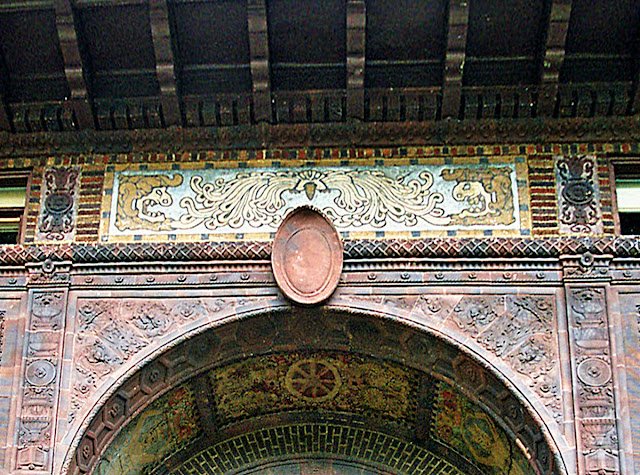 These are only a very few of the polychrome terra cotta buildings to be found in Newark. If you visit Newark, drive around--or take the light rail--to explore the different areas of the city. If you take the light rail, be sure to stop at the old Newark City Subway stations to see the WPA tile murals that celebrate the history of the Morris Canal: http://tilesinnewyork.blogspot.com/2013/05/newarks-wpa-tile-murals-fine-art-is.html.

Thanks are due to our friends, Marie Lawrence and Jan Braverman, who would ride around Newark with us to search out interesting architecture, and special thanks to my wife, Susan Ingham Padwee, for researching the Essex County Parks Administration Building for her monograph about the architect, Harold van Buren Magonigle.