My wife and I recently visited Reading, PA to try to locate “The Scar” on Mt. Penn--a grown-over quarry that was being developed as an amphitheater by WPA workers in the 1930s. While in Reading I also decided to try to locate some tile installations that I had read about in an article published in 1997*.  *[Beulah B. Fehr's “Arts and Crafts Tiles in Berks County, PA”, Tile Heritage, Vol. IV, No. 1, Summer 1997]


Reading, and Berks County, has a long history of tile-making, as well as art tile architectural decoration. One early tile maker in and around Berks County was Jacob Albrecht,

a Revolutionary War soldier and a famous evangelist. (The family changed its name to Albright after Jacob's death, and his group became known as the "Albright People".) "Dr. Raymond W. Albright, a descendant and former curator of the Historical Society of Berks County [...helped locate] the site of a former [Albrecht] tile kiln and clay pit. This is important because both Jacob Albrecht and his father were tile makers, digging the clay and baking the yellow-red plates that were hung on roofs, one fastened to the other... . The skill is a lost folk art. The clay tiles...still may be found on many old buildings in the area and are prized in the modern restoration of old Oley Valley homesteads." (Wayne E. Homan, "He Guarded Hessians: Albrecht the tile maker", Church and Home, May 1, 1965, pp. 13-15) 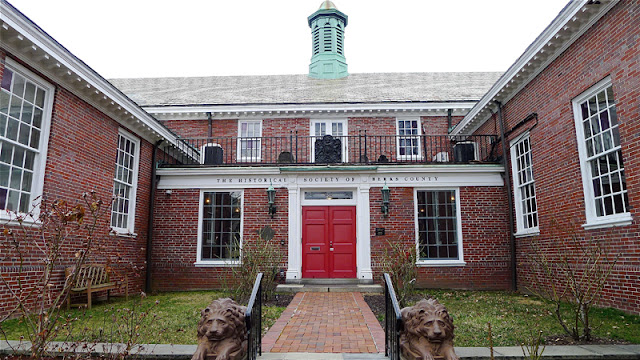 The first thing you notice as you enter the building is the mosaic seal of the Historical Society made by Henry Mercer's Moravian Tile Works of Doylestown, Pennsylvania. This seal is three feet in diameter and was a special order in 1944. (Beulah B. Fehr, “Arts and Crafts Tiles in Berks County, PA”, Tile Heritage, Vol. IV, No. 1, Summer 1997, p. 12) 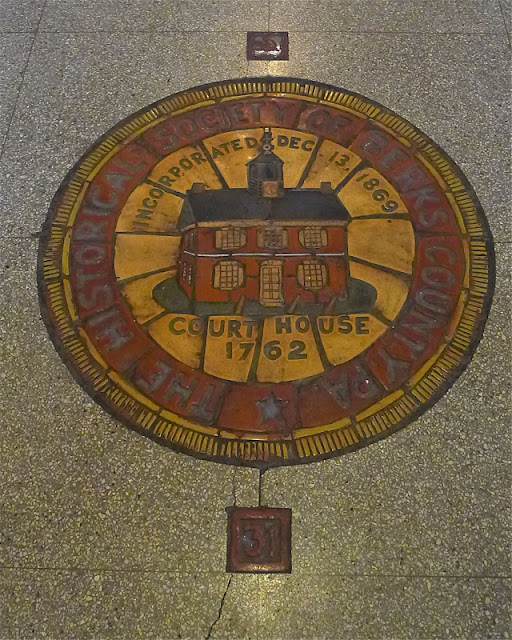 The lunch room is paved with a Moravian tile floor with a number of embedded mosaic roundels: 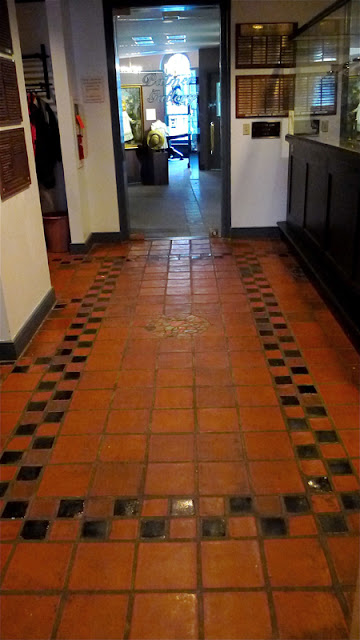 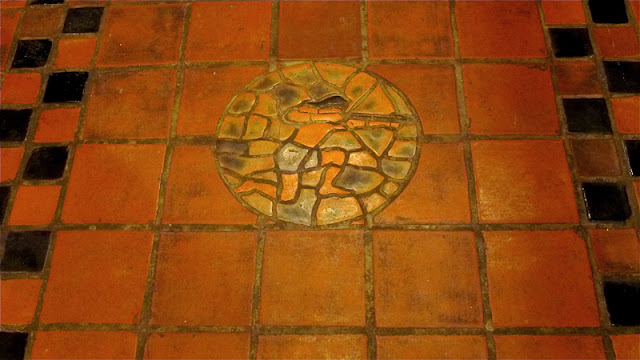 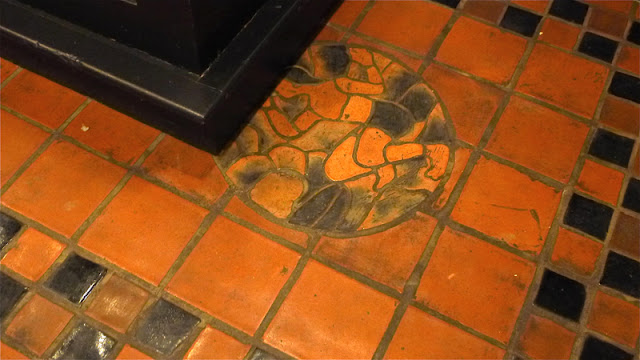 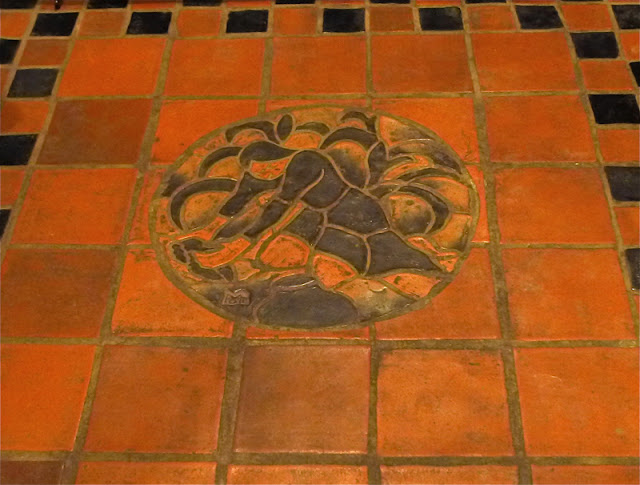 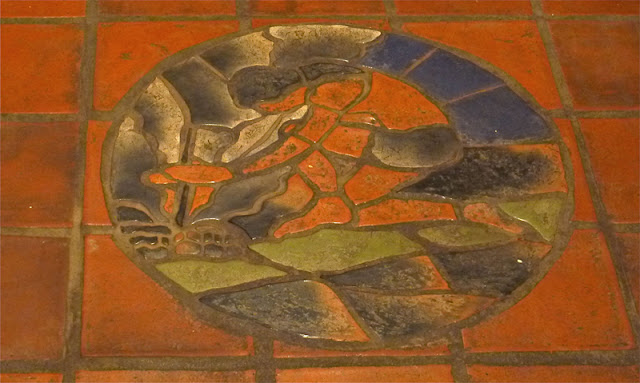 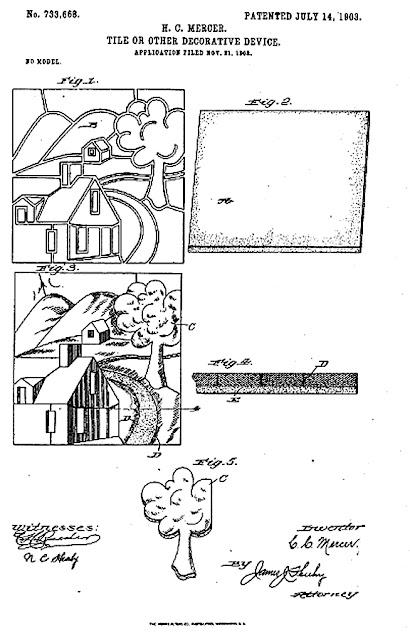 According to local historian Beulah Fehr, “In 1902 the American Tile and Mantel Company, 230 Penn Street[, Reading], became the first tile dealer in Reading to place an order with Mercer’s Moravian Pottery and Tile Works, thus initiating the use of handmade Arts and Crafts-type tiles in the area. ...The originality of designs and the muted glazes of Mercer’s tiles appealed to Charles H. Muhlenberg of the architectural firm of Muhlenberg Bros., who, in turn, did much to promote and popularize these tiles among his clients.” (Beulah B. Fehr, “Arts and Crafts Tiles in Berks County, PA”, Tile Heritage, Vol. IV, No. 1, Summer 1997, pp. 14-15)


“Born in Reading, PA, and a founding member of the prosperous Muhlenberg Bros. office[, 511 Penn Street], Charles H. Muhlenberg[, 1870-1960,] was educated in the Carroll Institute in Reading but then graduated from the Massachusetts Institute of Technology. By 1893 Muhlenberg Bros. had been established in Reading. Charles H. Muhlenberg, Sr., retired in 1940. Muhlenberg...was also organizer and past president of the Reading Architectural Society.” (http://www.philadelphiabuildings.org/pab/app/ar_display.cfm/22994) “Established by Charles H. Muhlenberg, Sr. in 1893, Muhlenberg Brothers [was] the dominant architecture/engineering firm in Reading, PA, for over sixty years. Schools, clubs, churches, banks, etc., [were all designed…] out of [this] office.” (http://www.philadelphiabuildings.org/pab/app/ar_display.cfm/26287)


“Oliver Mohr Landis [1868-1931], an enterprising business man of...Reading, Pa., engaged in doing mantel, fire-place, grate, tile and mosaic work, is a native of Berks county… . In 1892 Mr. Landis located in Reading and engaged in business under the firm name of 0. M. Landis & Co… . [A few years later he…] entered into partnership with H. C. Geisler, Sr., and for six years they carried on a business under the name of the American Tile & Mantel Company… .” (http://wc.rootsweb.ancestry.com/cgi-bin/igm.cgi?op=GET&db=schwenk&id=I060597)

In 1909 Muhlenberg Bros. designed the “Improved Order of the Red Men” Hall at 833 Walnut Street with Moravian tiles on the exterior front facade. “The Improved Order of Red Men (IORM) traces it’s origin from the Sons of Liberty patriots who were active before the American Revolutionary War and are well known for their participation in the ‘Boston Tea Party.’ The Sons of Liberty—and in turn the IORM—emulated in their organization, philosophy, and regalia the League of the Iroquois… .” In 1834 the “Order of Red Men, the precursor to the IORM was reorganized in Baltimore into the IORM with three mottoes: Freedom, Freindship and Charity. (http://www.phoenixmasonry.org/masonicmuseum/fraternalism/red_men.htm) 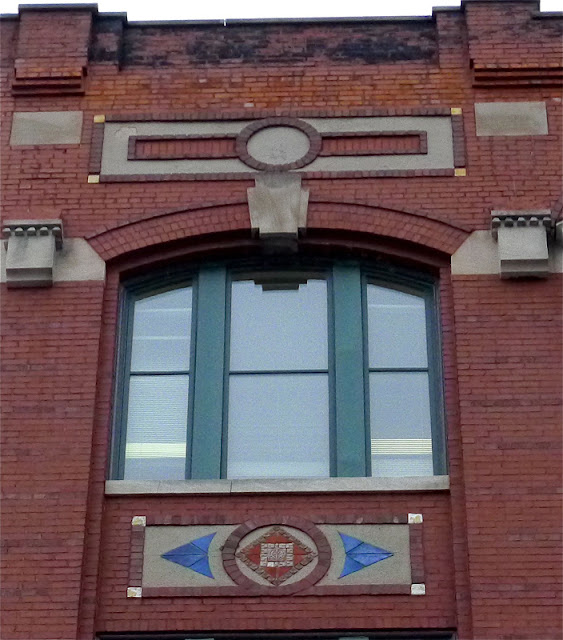 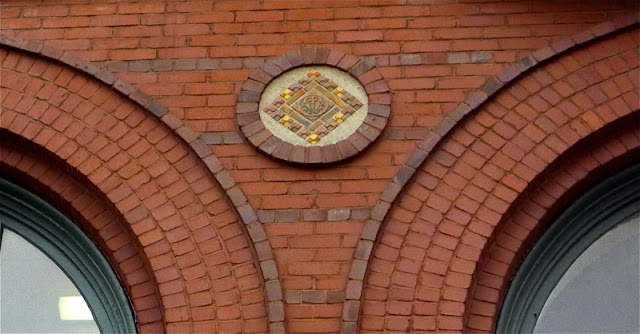 In 1914 the Catholic Literary and Social Union Hall was built at 126 N. 10th Street. It, too, had a Moravian tile-decorated facade. 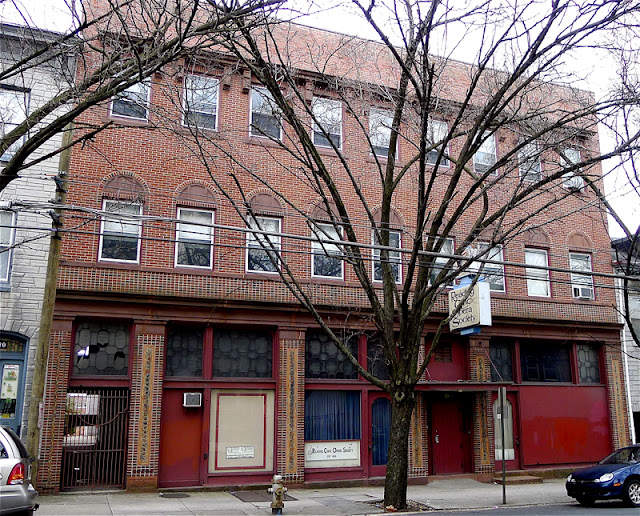 Beulah Fehr wrote that “the entrance windows on the front exterior...were bordered by six panels of ‘Arrangement No. 40’...which is described in the Moravian catalog: ‘A border of relief tiles in silhouette, banded with flat rectangular tiles, the whole representing a grapevine, with fruit and leaves in three repeating patterns.’ ...Mercer designed the grapevine border in 1907 and had it installed [...in his home,] Fonthill… .”  (Beulah B. Fehr, “Arts and Crafts Tiles in Berks County, PA”, Tile Heritage, Vol. IV, No. 1, Summer 1997, pp. 15-16) This building has been repurposed and is now the home of the Civic Opera Society. 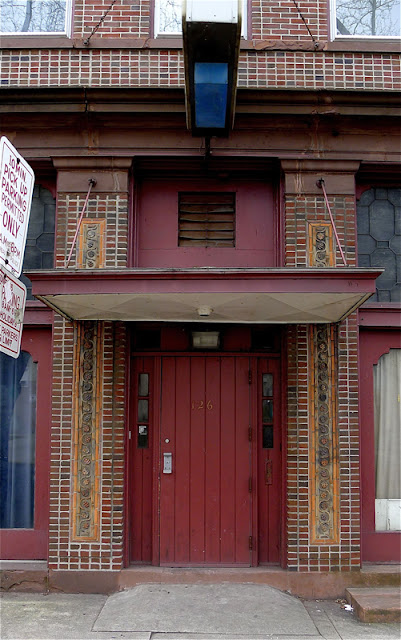 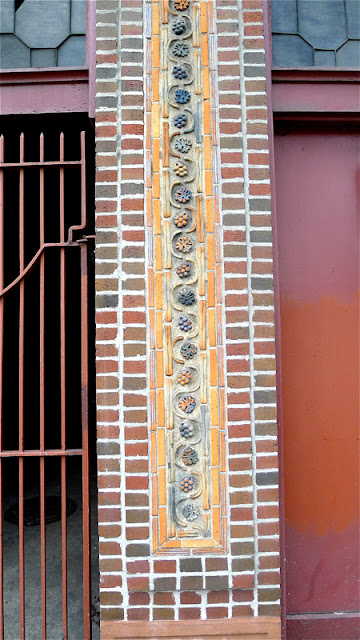 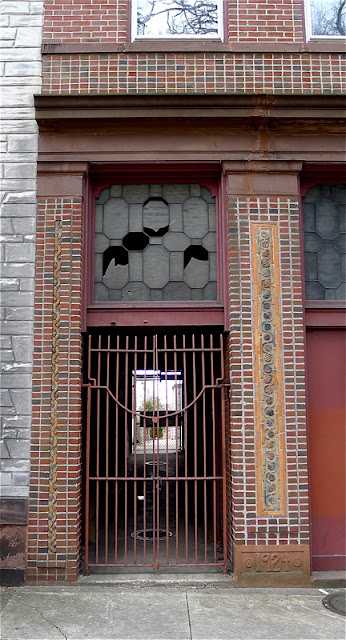 In 1927 Muhlenberg wrote to Mercer “requesting suggestions for the panels over each of the four entrance doors to [the] Tyson-Schoener Elementary School, 315 S. 5th Street. 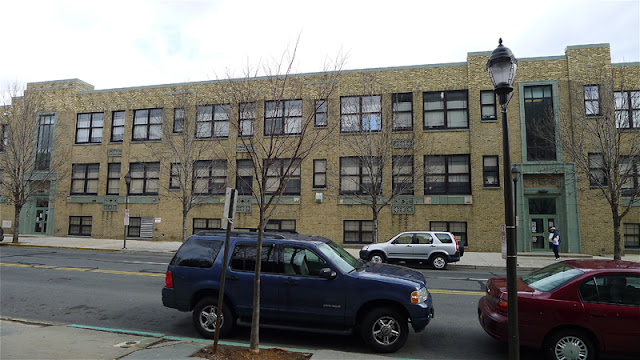 (The school was named for "Adam Schoener[,1798-1882, who]...began practicing medicine in Rehresburg...[and] had a large general practice and spent a lot of time in Lebanon and Berks Counties. He...[also] was a Justice of the Peace for nearly twenty years. ...In 1838 he was elected to the State House of Representatives [...and] was a member of the House when the controversial bill establishing the 'common schools' was passed. He was the only representative from Berks County to encourage support for this bill and to vote for its passage. ...Benjamin Tyson [b. 1804]...was also a proponent of the 'common school' bill*. He served in the State Legislature from 1848 to 1856.) (http://tsel.readingsd.net/site_res_view_template.aspx?id=2f79f78f-ac69-4a9c-a698-2e6ffb696d2b)

*["The era of universal public education arrived in Pennsylvania in 1834 with the enactment of the Free Schools Act. ...the creation of common schools ushered in a new era of educational policy and state government regulation of curriculum, standards, and finances." (http://explorepahistory.com/story.php?storyId=1-9-21)] 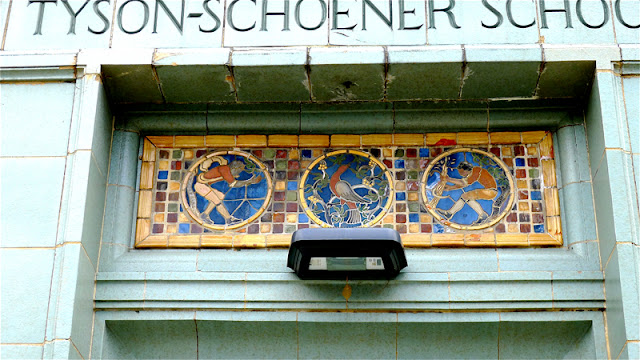 In addition to these Moravian panels there are twenty-one tiles, each about 12” x 12”, in a band below the first floor windows on the school facade. It was not known who designed these tiles which depict “either a scene from history, a fairy tale, a children’s story, or legend” until 1986. The artist was Virginia Muhlenberg Brooke, the sister of the architect. At the time--1927--she was a student at Parsons School of Design in New York City. Her brother “was looking for some appropriate artwork for the outside of the building--preferably something that would appeal to children.” Mrs. Brooke noted that she “started with the flight of (Charles A.) Lindbergh… . ‘It was 1928 and everyone was talking about Lindbergh’s flight the year before. Then, I thought I should depict the first great crossing, that of Columbus… . After that I went on to fairy tales.’ Each tile was colorfully designed by Brooke and given to her brother for incorporation within the building. She then forgot all about her artistic endeavor [...for almost sixty years].” (Paula M. Flippin, “By Jove! They cracked the tile mystery.”, Reading Times, Tuesday, May 13, 1986)

“From left to right [under the windows] are to be found: Jack Be Nimble, Jack Sprat, The Fox and the Grapes, Ali Baba and the 40 Thieves, The Witch’s House from Hansel and Gretel, Columbus’s 3 ships, ‘The Spirit of St. Louis’…, Robinson Crusoe, Gulliver’s Travels, Jack and the Beanstalk, Miss Muffet, The 3 Bears, Henny Penny, Little Red Riding Hood, Babes in the Woods, Cinderella, Winken, Blynken, and Nod, Hiawatha, Sir Gallahad, William Tell’s son, and William Tell.


"There are several more tiles by an unknown artist [i.e., the Moravian Pottery and Tile Works] mounted into the lintels of the main entrance ways. These portray various aspects of the seasons. Spring and Summer are over the northern entrance: a medallion picturing a bird and the Latin sentence, ‘Silva vocal,’ separate each. 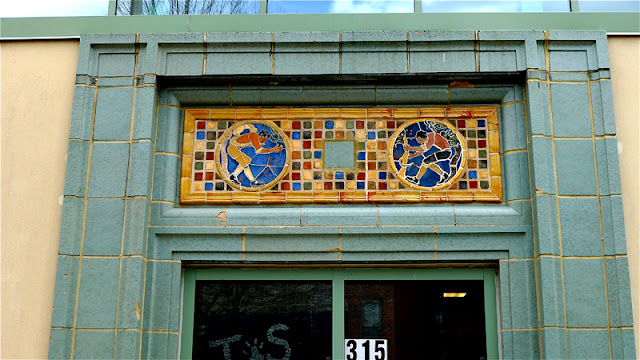 "Fall and Winter are to be seen over the southern doorway; between them is a medallion of a pirate ship, the ‘Aves.’” (Post 1986, unsigned typewritten and handwritten notes in folder VF F11 MS-1 in the Henry Janssen Library of the Historical Society of Berks County, PA) 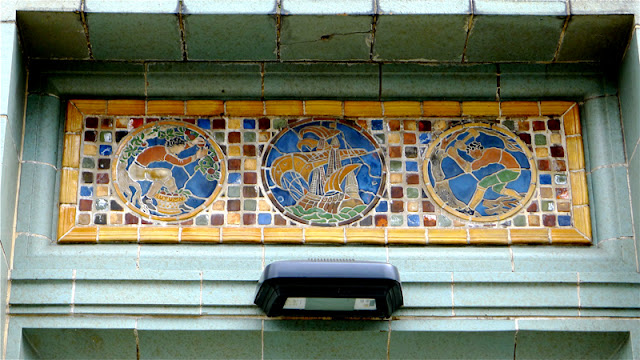 Although the tile maker of Virginia Muhlenberg Brooke’s tile designs is not known*, it is possible that Charles Muhlenberg asked Henry Mercer to make tiles of his sister’s designs. It is also possible that he asked another tilemaker, whose work was popular in Reading to make the tiles--Herman Carl Mueller. (The author tried to discover who actually made these tiles. Both the Tile Heritage Foundation and Susan Tunick of the Friends of Terra Cotta have suggested that the tile maker may have been the company that supplied the terra cotta for the building, rather than either Mercer or Mueller.)

*[Thanks to "Bungalow Bill" Sheshko, the maker of these tiles has just been identified as the Federal Seaboard Terra Cotta Company of Perth Amboy, New Jersey. The Aesops Fable tile of the fox and grapes pictured in the auction below is one of the school tiles. The tiles are 14" square rather than 12" square.  http://www.liveauctioneers.com/item/203876]

The Mueller Mosaic Company of Trenton, New Jersey installed much interior and exterior tile work throughout Berks County. One installation of Mueller Mosaic polychrome tiles was the remodeling of St. Joseph’s Catholic Church, 1018 N. 8th Street, by the architect G.C. Freeman in 1926. 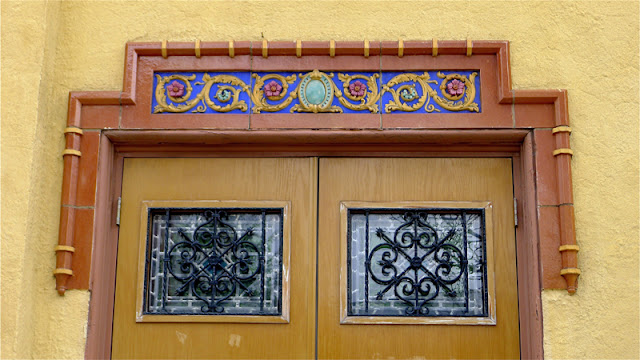 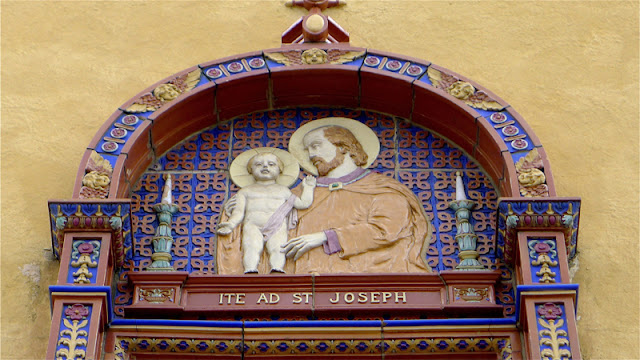 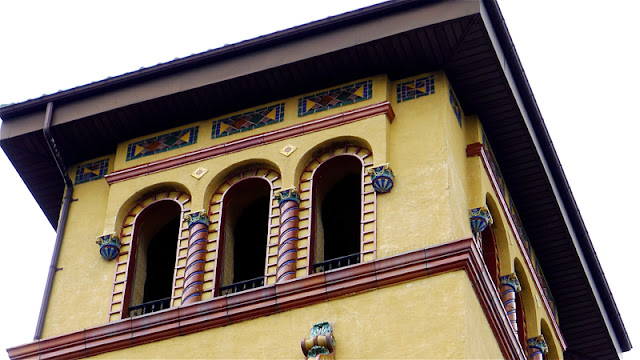 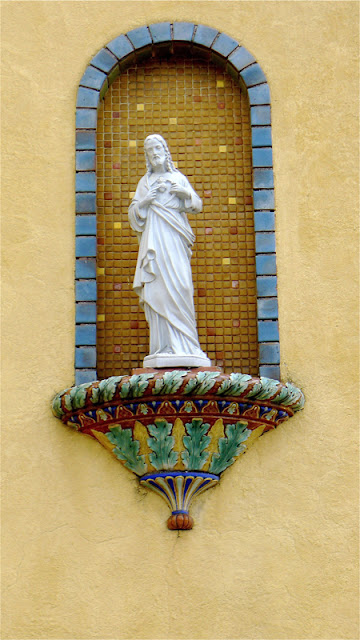 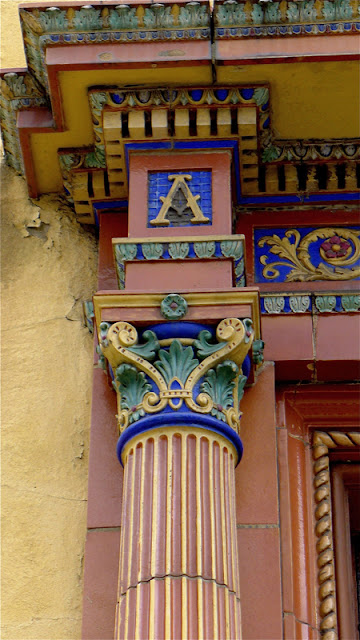 G.C. Freeman designed many buildings in Berks County including the William Penn Fire Tower on Skyline Drive at the top of Mt. Penn.

“The William Penn Memorial Fire Tower was built in 1939 as a fire observation tower and tourist attraction. The Tower is named in honor of William Penn, founder of the Province of Pennsylvania. The imposing stone and reinforced concrete tower is 120 feet tall and sits atop Mt. Penn, overlooking the City of Reading and its surroundings. The tower is situated in a park setting on Skyline Drive, one mile from Reading's landmark Pagoda. ...G.C. Freeman designed the new tower, incorporating cosmetic and functional elements from over a half-dozen towers scattered throughout the county as far away as St. Paul, Minnesota. Initial design elements were obvious; the tower would be constructed of entirely fireproof materials. Stone supplied the base for which the brick tower was built. ...Inlaid on the entry wall is the "shield of arms" of the William Penn Family designed in colored tiling. 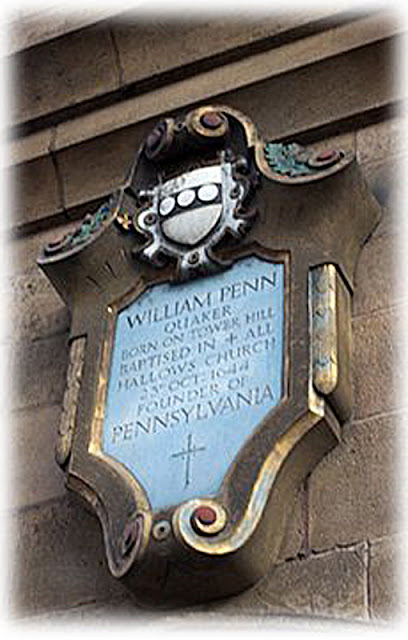 The exterior and interior walls of the tower have a sand finish with molded shale brick, and a center entrance floor of brick-and-stone design. All stone used in construction is local to the mountain.” (http://www.goreadingberks.com/historicsites.php) "The...Fire Tower...was built by stone masons Frank Ferrara, Joseph Ferrara [and] James Ciliberti." (http://www.frankferrara.com/about/History)

We never did find the actual "scar" on Mt. Penn nor the remains of the WPA era amphitheater, but it was a great day's outing.


I would like to thank the staff of the Library of the Historical Society of Berks County for their knowledge and help in locating tile-related materials. Thanks, also to the Tile Heritage Foundation, Susan Tunick of the Friends of Terra Cotta and "Bungalow Bill" Shesko for the Tyson-Schoener Elementary School tile attribution. And a special thanks to Beulah B. Fehr for doing the original research about the tile installations in Berks County, and then writing about them.