March 1, 2018: My apologies to my readers. As a result of being overloaded this past month, I did not finish an article for this blog. I hope to remedy that in April. Below is an announcement about a successful preservation effort involving exterior friezes designed by Hildreth Meière and Waylande Gregory in Washington, DC. A few weeks ago we were notified by the Friends of Terra Cotta and the Tile Heritage Foundation of a request from the International Hildreth Meière Foundation to help save these murals, which could have been slated for demolition. You can visit the site below.

Prior to the start of this blog in 2012, I was interested in the identification of antique tiles of the United States, which I still collect. Many of these tiles were marked, but many more were not marked in any way. Almost all, however, had "keys" on their reverse sides. Keys are the raised and/or indented areas on the reverse of a tile which are used to help a tile stick to a surface. Some keys are unique to a single tile manufacturer while others were used by more than one company. I tried to organize key patterns found on the backs of most U.S. tiles into a rational classification system loosely based on the work of British tile researchers Diana and Peter Clegg.

In 1997 I donated my research manuscript, A Guide to the Patterns and Markings on the Backs of Untied States Ceramic Tiles, 1870s-1930s, to the Tile Heritage Foundation, which, subsequently, sold copies to the public. In 1999 I self-published the first edition of A Field Guide to the Key Patterns on the Backs of United States Ceramic Tiles, 1870s-1930s, which is now in its third edition as a free download on the internet.(1) The field guide now contains drawings of about 800 key patterns on United States tiles, and new key patterns are being added as they are discovered.

In 2005 The Journal of the American Art Pottery Association published my article and classification system of key patterns that underlies the "Field Guide".(2) That article is reprinted below with updates to the original. I do not claim that the classification system below is the only system that can be used with United States tiles. It is, however, the only system that has been published in conjunction to any research about key patterns that has been done to date. 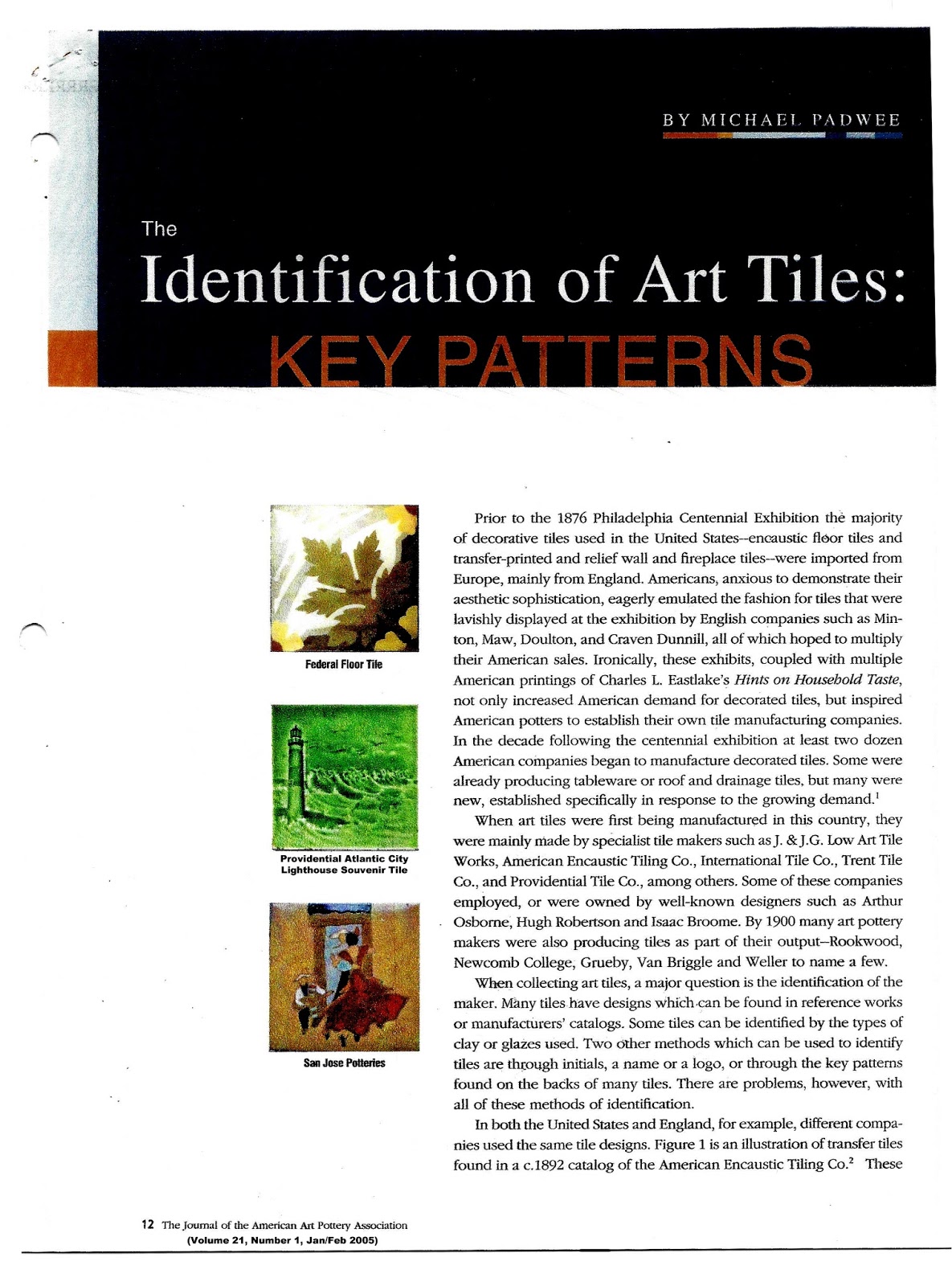 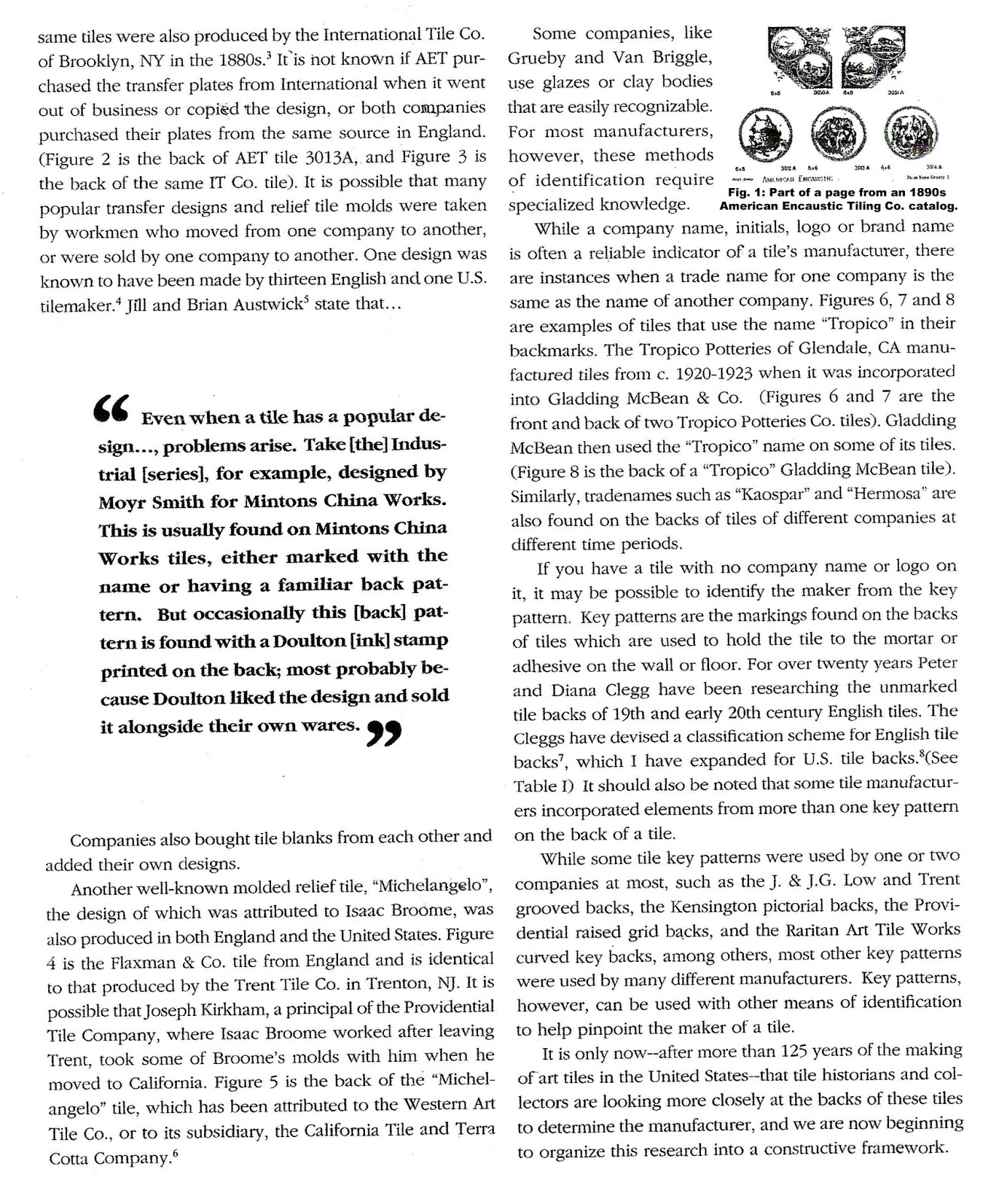 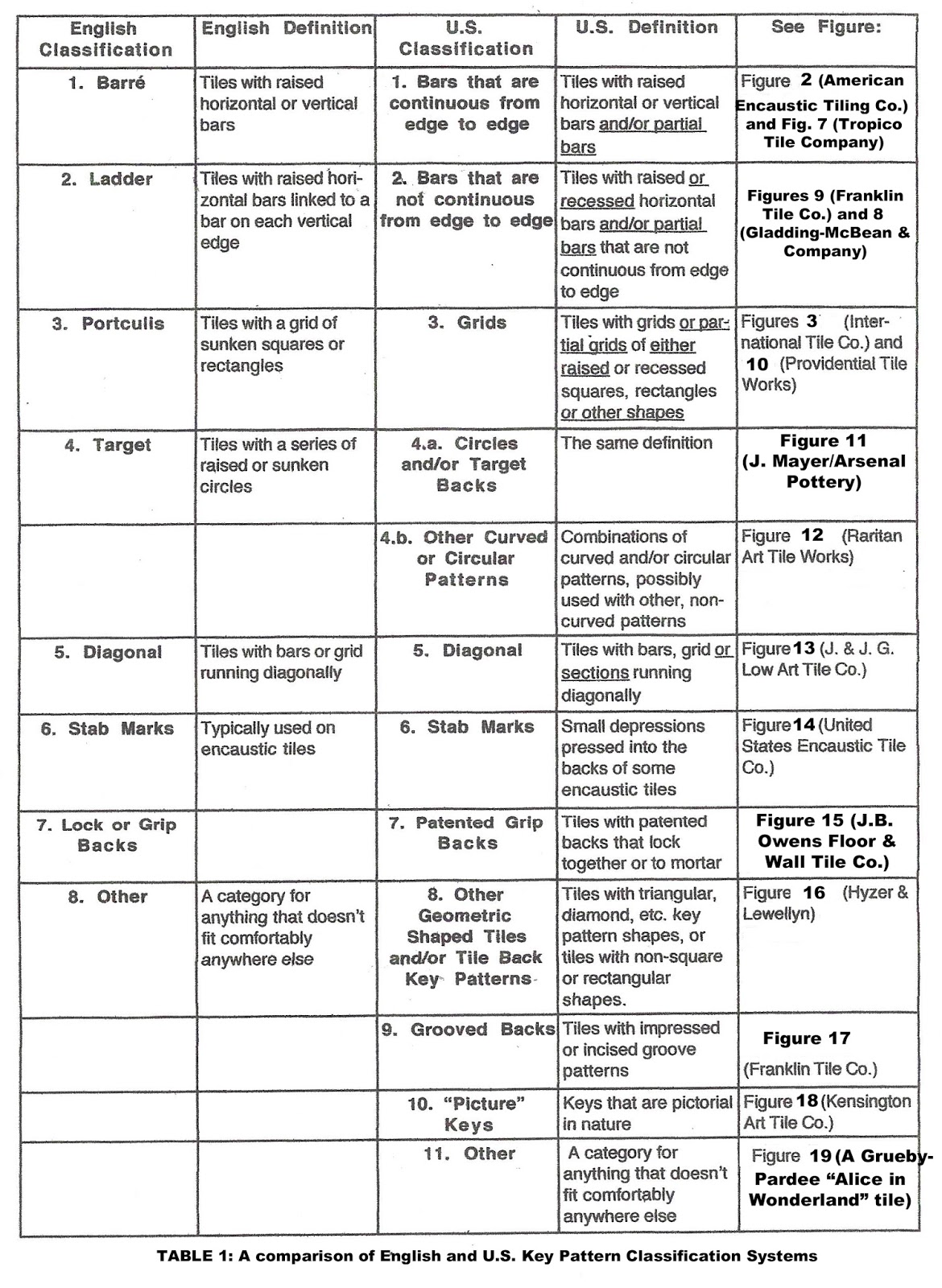 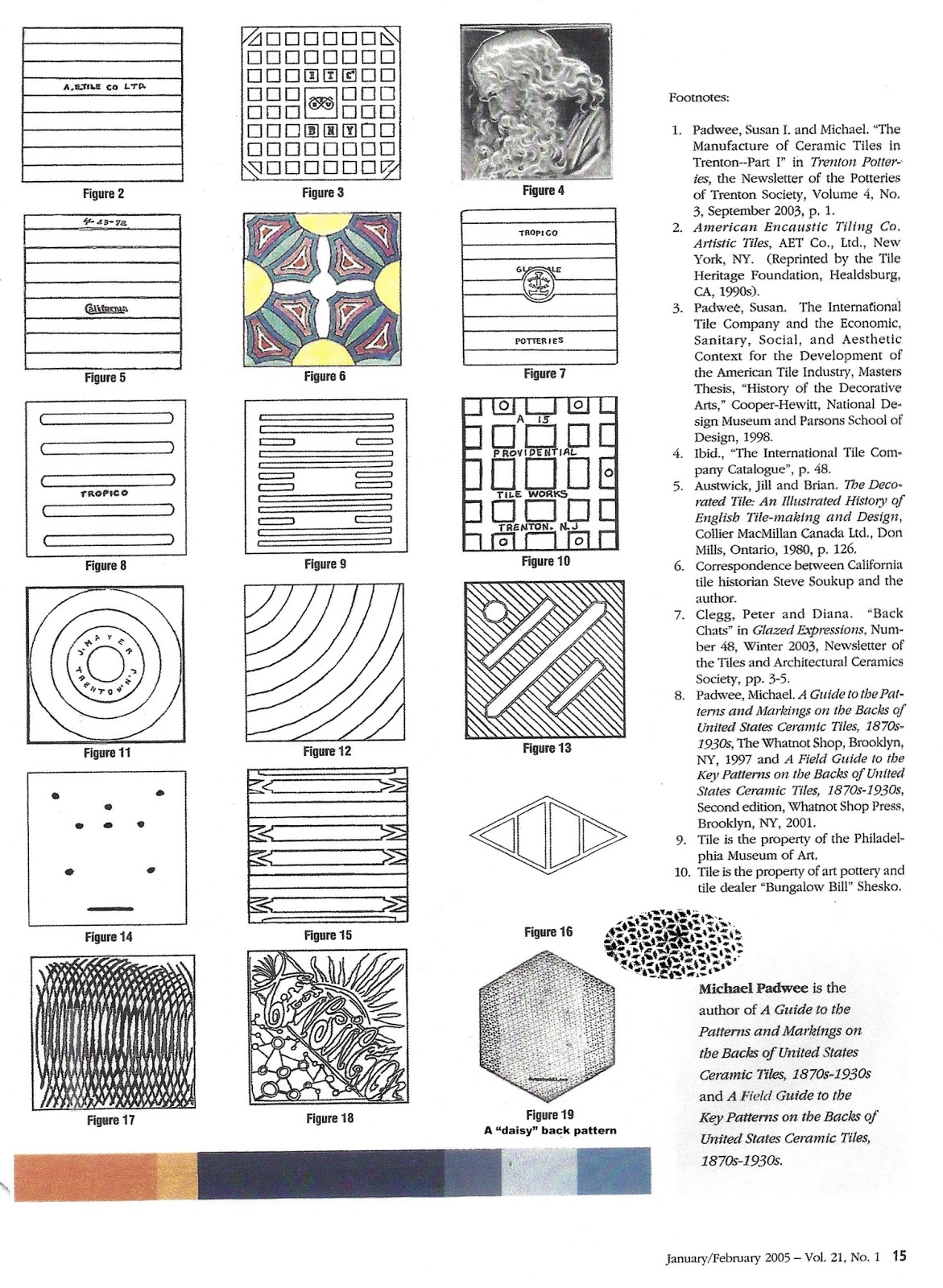 Notes:
1. Visit http://tilefieldguide.omeka.net/items/show/49, scroll down to "Files" and click on the pdf document. It can be downloaded to your computer.

Prior to his death in October 2017 stained and dalle de verre glass artist Robert Pinart donated his glass-related papers, maquettes, color drawings, photographs and notebooks to the Rakow Research Library of the Corning Museum of Glass in Corning, New York. (†)

The archivists at the Rakow Research Library have published an online Study Guide to the Robert Pinart Papers at
http://archivesspace.cmog.org/repositories/3/resources/44.


† Many of Mr. Pinart's papers, maquettes, drawings, sketchbooks and personal stained glass had been sold at auction to help pay for his stay in an assisted living residence.


I recently wrote about the influence of Islamic art on the artist M. C. Escher. I have just been apprised of some new resources that focus on Islamic artistic influences. The first is the "Database of Islamic Heritage in Portugal" (http://patrimonioislamico. ulusofona.pt/about-en.php). "The project 'Islamic Heritage Database' is a project of the Religions Studies of the Universidade Lusófona de Humanidades e Tecnologias.
[The project presents] a survey list of Islamic heritage in Portugal (Including contemporary heritage of Islamic influence), both built and museological, with a methodically description in systematic records."

Photographer and artist Kelvin Bown uses modern technology to restore old images of the Middle East to renewed clarity, depth and detail. Shown below, the Qubbat al-Sakhra (the Dome of the Rock), built between 688 and 691CE is considered "...one of the greatest achievements of early Islamic architects, craftsmen and artists. ...Its intricate patterns reflect Hellenic, Roman, Byzantine and Sassanid influences, together with bands and medallions of Arabic calligraphy." ("FIRSTLOOK", AramcoWorld, Vol. 68, No. 5, September/October 2017, p. 3)