While taking photos of Robert Pinart’s 50+ stained glass windows in St. John the Baptist Catholic Church in Hillsdale, NJ, I saw a metal sculpture on a mosaic tile base on the far side of the Nave. When I got closer I thought I recognized the mosaic tile pieces as similar to tiles made by Jean Nison, Robert’s ex-wife and close friend. I brought my photos to Robert, and he identified them as Nison’s.

According to the church dedication booklet, the church architect was Louis J. Mineo, Jr., who lived in Hillsdale and had offices in Emerson, New Jersey, and the Liturgical Designer was Michael F. Segalas. Robert Pinart and Jean Nison both knew Michael Segalas when he worked in the architecture office of Percival Goodman. Pinart said that he obtained some commissions through Michael Segalas. Louis Mineo, Jr. was also the architect of record for other projects in New Jersey where Pinart designed the windows--Pascack Valley Hospital in Westwood (1967) and Temple Beth El in Closter (1968). The sculpture was fabricated by Columbia Art Metal Works, Newark, New Jersey. (Dedication Booklet, Saint John the Baptist Hillsdale, New Jersey, Ecclesiastical Color Publishers, South Hackensack, NJ, 1969) 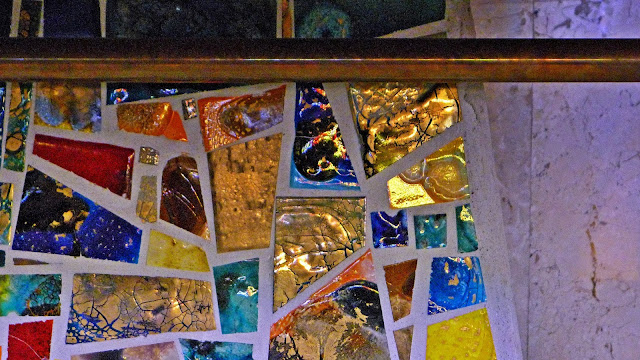 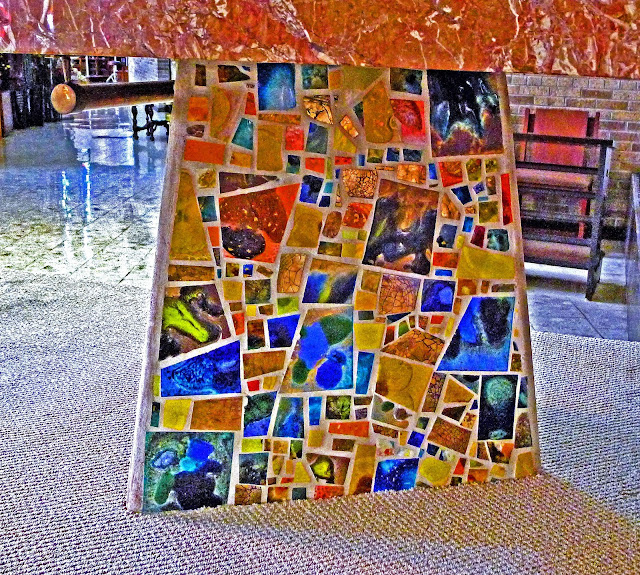 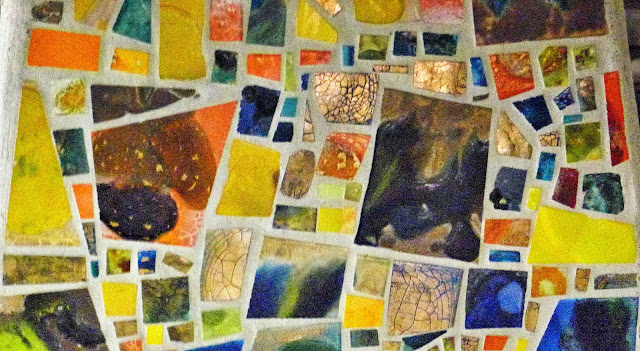 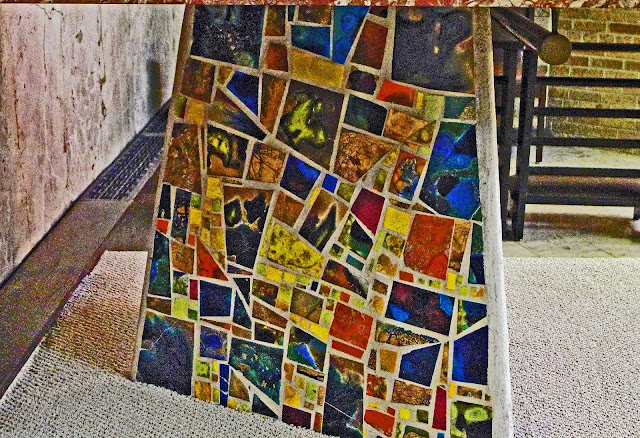 While digitizing the glass slides of Robert Pinart, I came across a series of photos of a large, abstract dalle de verre window Robert made for his ex-wife, Jean Nison. One of the slides included a section of Nison's living room which showed a tiled table top. Pinart identified the tiling as Jean's, but had no idea what happened to the table after the house was sold. 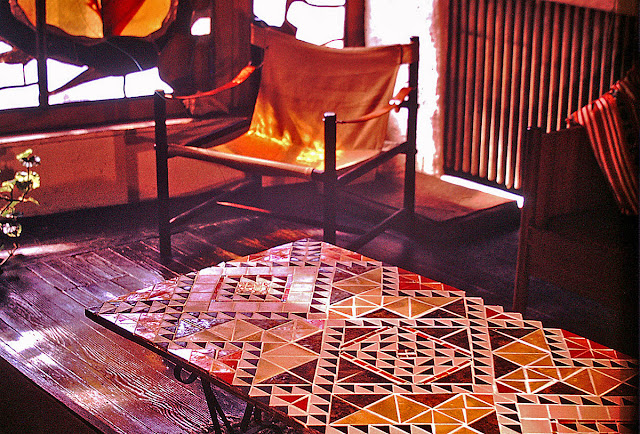 
In my article about mid-century-modern ceramic tile artist Jean Nison, I mentioned that she was commissioned to create a tile installation in the Lever Brother’s Boardroom in New York City’s landmarked Lever Building.


According to Nison, she visited decorators, left tiles with them and hoped they would call her. This was how, she believed, Raymond Lowey Associates, the industrial design firm, asked her to make a wall decoration for Lever House, at that time the headquarters of Lever Brothers Corporation (now Unilever). I contacted the curator of the Lever House Art Collection, Mr. Richard Marshall, but he had no information about the fate of Nison's tile installation. Unilever Corporation moved out of the building in the 1980s, and may have taken the tiles with them. A request to Unilever for information, however, went unanswered.

Recently, however, the question of the fate of the installation may have been answered.


After reading my article, the Chief Curator of the Mobile (AL) Museum of Art, Paul Richelson, contacted me. Two tiles from the boardroom fireplace in Lever House had been donated to the Mobile Museum of Art by Eric M. and Joy Hart in 2005. Either these were extra tiles that were not used in the installation, or the installation was removed when Unilever moved from Lever House to Connecticut and tiles were given to some of the executives. If the latter, other tiles from this installation may still exist.


To prove my point, a recent ebay auction listed a “replica” boxed tile of the Lever Brothers tile on the left, above. Nison may have made extras to sell in crafts stores and at Lever House, itself.

I was recently contacted by a reader who had purchased a Nison tile depicting a doe on a field of gold bubbles. The tile has writing on the back that says "do again creeping panther", which could mean Nison was considering using the doe tile in a panel setting.

Built in Long Beach, California in 1904-05 the Tichenor House was one of only three homes constructed in Long Beach by the renowned architectural team of Charles and Henry Greene. In the early 1950s “[the] house was extensively remodeled [...by architect Adrian Wilson and his associate, Alden Becker] with many modern changes to the interior,” (http://articles.latimes.com/1991-05-05/news/hl-2211_1_tichenor-house) including the addition of a double dragon tile mural in the master bathroom.

In December of 2011 a fire started in the rear of the house and was extinguished in about twenty minutes. (http://www.presstelegram.com/technology/20111212/fire-strikes-historic-tichenor-house)
“The fire in the [bath]room must have been very intense, because the tile was covered with soot that was burned onto the surface of the tile face. The tile also had a crackle glaze, which has many very tiny cracks over the entire surface. This was intentional, and reflects the style of the tile. Unfortunately, the soot permeated the crackle glaze... .” (http://www.justanswer.com/antiques/7ehtb-ra-jpm.html)


Brian Kaiser, a tile conservator and preservationist, was called in and saved the bathroom mural. Kaiser has been restoring the mural ever since, and half of it has been completely restored. 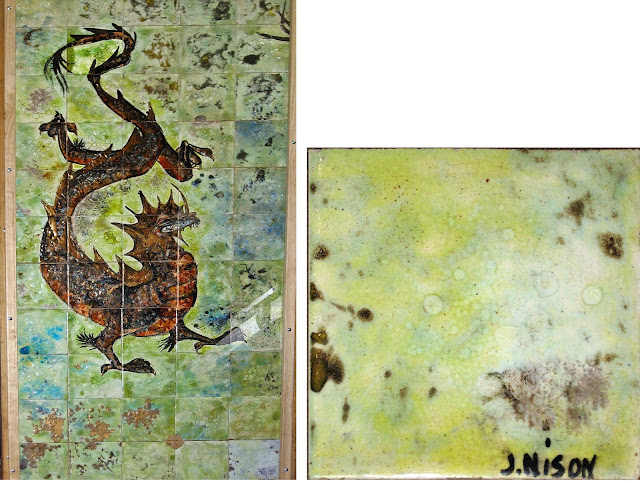 There is a problem, though. Brian lives in a house that was once owned by the ceramicist Rufus Keeler, who, for many years, was the major force behind the Malibu Potteries in Malibu, California. Brian’s house has many interior and exterior tile installations from the 1920s-30s that were designed by Keeler. Nison’s panel from the 1950s does not belong in that setting, and Brian would like to find a new home for Nison’s mural which is approximately 7’ by 7’. If anyone is interested in this mural, they should contact Brian at brian.kaiser'at'ymail.com. 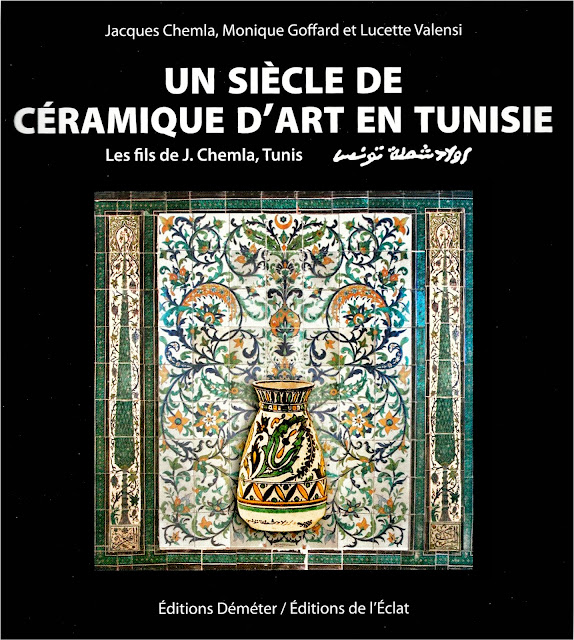 For those of us who have long marveled at the wonderful designs of Jacob Chemla's Tunisian tiles, this book, written by Jacob's grandchildren, Monique Goffard, Jacques Chemla and Lucette Valensi, will be very welcome. In the first third of the twentieth century the "Tunisian Tile Company" and "The African Tile Company" supplied architects like George Washington Smith, Bertram Goodhue and Addison Mizner, among others, with Mediterranean and Middle Eastern-style tiles for resorts, mansions, hotels and other residential and commercial establishments in the United States. Although many of the Tunisian tile installations no longer exist--mainly in New York City and State, many others in California and Florida remain intact.


This book details the lives of the Chemla family and their ceramic interests from Haï Chemla through his son, Jacob (1858-1938), and his three sons, Victor, Albert and Mouche and their families. Jacob Chemla is credited with reviving the lost arts of Tunisian ceramics by perfecting a special glaze and blue color that had been thought lost.

There are large sections of photos of architectural tile installations, individual tiles and pottery. Pottery markings and individual signatures of artists are also identified.

This is an important book that is not to be missed, especially by tile and pottery enthusiasts, architectural historians and preservationists.

This book is written in French and may be purchased from http://www.amazon.ca/Un-siècle-céramique-dart-Tunisie/dp/2841623777,

I have previously written two articles about the tiles produced by the Chemla potteries:  http://tilesinnewyork.blogspot.com/2014/11/lost-tile-installations-tunisian-tiles.html