THE CAFÉ SAVARIN AND THE ROOKWOOD POTTERY; CHOCOLATE SHOPPE REBOUNDS

In January 1888 the Café Savarin opened for business in the old Equitable Building at 120 Broadway, Manhattan. It was named “...after Brilliat-Savarin, statesman, jurist, and author of ‘Physiologie du Gout’ [The Physiology of Taste; or Transcendental Gastronomy]… . The main café, restaurant, and serving room are situated on the ground floor… . The [café] is richly finished in white mahogany, with the walls in mosaic… . The...main restaurant…[a]fter the...midday meal hours are over…can be converted into a café, as it is furnished with a view to that end, the room being paved with marble, the walls finished in tile… .” (“A Gorgeous Eating House”, The New York Times, January 8, 1888)
“Those who are familiar with the ground floor rooms of the Café Savarin...in the basement of the Equitable...building, and occupying the front on Pine Street with a return on Broadway, will remember the very pleasing effect of these low large rooms divided by stout and stumpy, round columns, and lined and faced everywhere, columns, walls, and ceiling, with enameled tiles of a rather bright buff tone… .” (Russell Sturgis, “Bricks and Tiles for Interior Finishing. I.”, The Brickbuilder, Vol. VIII, No. 1, Jan. 1899, p. 3)

“The Equitable Life Assurance Building was the headquarters of the The Equitable Life Assurance Society of the United States. Construction was completed on May 1, 1870 at 120 Broadway in New York City and under the leadership of Henry Baldwin Hyde was the first office building to feature passenger elevators. At a then-record 130 feet (40 m), it is considered by some the world's first skyscraper. The architects were Arthur Gilman and Edward H. Kendall, with George B. Post as a consulting engineer and hydraulic elevators made by the Elisha Otis company. The building, described as fireproof, was destroyed by a massive fire on January 9, 1912. Extremely cold weather caused the water from the fire trucks to freeze on the building.” (http://en.wikipedia.org/wiki/Equitable_Life_Assurance_Building)
“Shortly after 5 a.m. on Tuesday, Jan. 9, 1912, a small fire began in a basement office serving the Cafe Savarin. After causing moderate damage, it found a greasy dumbwaiter shaft that ran to an eighth-floor kitchen. Then the conflagration really began. ...New Yorkers might have had a hard time that day imagining a catastrophe sufficient to make them forget the fire at the “fire-proof” Equitable Building any time soon. But four months later, on April 10, the Titanic set out on her maiden voyage to America.” (http://cityroom.blogs.nytimes.com/2012/01/08/consumed-in-fire-cloaked-in-ice-equitables-headquarters-fell-100-years-ago/)

A new Equitable Building was built on the same piece of land as the old skyscraper. “A landmark engineering achievement as a skyscraper, it was designed by Ernest R. Graham and completed in 1915. The controversy surrounding its construction contributed to the adoption of the first modern building and zoning restrictions on vertical structures in Manhattan. ...Upon its completion, the building was the largest (in total floor area) in the world. It rises as a single tower with the appearance of two separate identical towers standing side by side, connected by a wing for the whole height of the building, such that it appears in the shape of the letter "H" when viewed from above. A striking feature of the building by modern standards is that it has no setback from the street beyond the depth of the sidewalk, rising vertically for all its floors. ...Opponents of the buildings were outraged at the unprecedented volume of the building, which cast a 7 acre (28,000 m²) shadow on the surrounding streets… . The effort to place restrictions on land use in New York City led to the Standard State Zoning Enabling Act, a key piece of legislation in the history of zoning. The act became the blueprint for zoning in the rest of the country, and was accepted almost without change by most states.  (http://en.wikipedia.org/wiki/Equitable_Building_(Manhattan))
"The six-story base is clad in granite and terra cotta, while the upper stories, which take the form of an H-shaped
superstructure, are faced with buff brick accented by
terra-cotta trim. All the terra cotta was manufactured
by the Federal Terra-Cotta Company to match the
granite. ...Silverstein Properties bought the building
in 1980, and several years later undertook a major
renovation, planned by the architectural firm of
Ehrenkrantz, Eckstut & Whitelaw. Work included
replacing some 10,000 linear feet of terra-cotta
ornament... ." (Anthony W. Robbins and Victoria Young, "Equitable Building, 120 Broadway (aka 104-124 Broadway, 70-84 Cedar Street, 15-25 Nassau Street, and 2-16 Pine Street), Borough of Manhattan. Built 1913-15; architect Ernest R. Graham with Peirce Anderson", Landmarks Preservation Commission, June 25, 1996, Designation List 273, LP-1935, pp. 6-7)

The Rookwood Pottery of Cincinnati, Ohio was started in 1880 by Maria Longworth Nichols Storer. "In 1883, Nichols hired William Watts Taylor (1847-1913) as the general business manager of Rookwood pottery.  Taylor’s goals for Rookwood echoed those of [William] Morris and the Arts and Crafts Movement which was to restore quality and integrity to the arts.  Taylor was adamant about nurturing innovative ideas and even commissioned leading chemists, such as Karl Langenbeck (1861-1938), to aid in the development of new glazes.  The results were the extraordinary glazes that were at the time exclusive to Rookwood pottery.  It was under Taylor’s command that Rookwood would reach the summit of its success." (Daneel S. Smith, "Rookwood Pottery as 'Fine Art'", http://journal.utarts.com/articles.php?id=1&type=paper) "In 1902, Rookwood added architectural pottery to its portfolio. Under the direction of Watts Taylor, this division rapidly gained national and international acclaim.” (From http://en.wikipedia.org/wiki/Rookwood_Pottery_Company)
It was not until the 1904 World’s Fair in St. Louis, however, that Rookwood first “...introduced the general public to the matt glazed products of its faience division… . ...The Rookwood Faience display [in 1904] was tilted steeply toward large architectural pieces. …[A]n oft repeated theme in Rookwood’s promotional literature [...was that] Rookwood’s matt glazes fit in well among lots of other building materials: ‘The soft waxen texture [of our faience] suits itself admirably to marble, woodwork, and wall surfaces, overcoming completely the objectionable glitter in the ordinary mirror-like glazes [of other companies]… .” (Richard D. Mohr, “Rookwood Faience Tiles: Their History, Designers, Techniques, and Styles--Part I”, Journal of the American Art Pottery Association, Vol. 26, No. 1, Winter 2010, p. 16)

Although Rookwood tried to influence architects to use its faience products on building exteriors in place of less expensive terra cotta cladding, the “...company never achieved any sort of extensive use of its faience on building exteriors… . ...Rookwood did much better with interiors, including a fair number of total tile installations where walls, floors, ceilings, and fixtures were all faced with its faience… . Interiors extensively using faience, say, as a wainscot, became the headliners for Rookwood advertising efforts.” (Richard D. Mohr, p. 22)

The Ladies' Restaurant portion of the Café opened a few months after the main restaurant. “The main feature of interest in the [...Ladies’ Restaurant] is the use of Rookwood Faience mural decorations in panels of the walls at each end of the room and in each of the bays which occur in the long sides of the room. ...The pictorial motive is the simple one of youthful gallants and belles in 18th Century costume walking about in formal gardens and ostensibly engaged in the pastime of respectful flirtation… .” (“Mural Decorations in the Ladies’ Restaurant, Cafe Savarin”, Architecture, Vol. XXXIII, No. 3, March 1916, p. 65)

A 1916 Rookwood ad shows one of the murals in the Ladies’ Restaurant and states that it was executed by Rookwood from the designs of the artists, Knud Laub and Frantz Helving. (The American Architect, Vol. CIX, No. 2114, June 28, 1916, p. 37)

It is difficult to tell, today, exactly where the Café Savarin was situated in the basement of the Equitable Building. I spoke with one worker in the building, who had been there for over thirty years, and he had no recollection of that restaurant. He did point out where a Greek restaurant once existed--behind me in the photo, below, of the basement hallway, which may have once connected the various rooms of the Café Savarin.

Another room, to the right, down a short hall which leads to a subway entrance, was also a restaurant at one time, and may have been where the Ladies' Restaurant area was located, but this is not certain, either. The whole basement area seems to have been extensively renovated over the 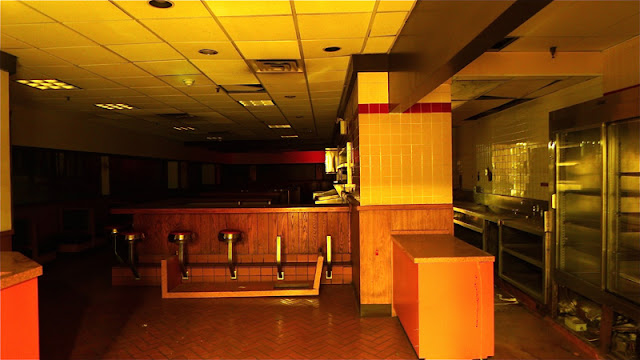 years. In any case, Café Savarin and its Rookwood tiles and tile murals no longer exist.


A NEW BEGINNING FOR A 1914 CALIFORNIA TILE INSTALLATION

There is a movement afoot to restore Los Angeles' Chocolate Shoppe, whose Batchelder-tiled interior (1914) at 217 West 6th Street was declared a Los Angeles landmark in 1975 and then neglected almost to destruction. The Chocolate Shoppe was clad with custom-made tiles and were Batchelder's first major installation. The space had been subdivided into flea market stalls for a number of years, but it was recently taken over by preservationists in early 2012, reopened as a Dutch Chocolate Shoppe, and is being restored. There is a 30 minute YouTube video, made by the Los Angeles Visionaries Association in May 2012, about the restoration and reopening of this work of ceramic art. The discussion by tile preservationist and historian Brian Kaiser is especially interesting: http://www.youtube.com/watch?v=A1I8Gewd-UA 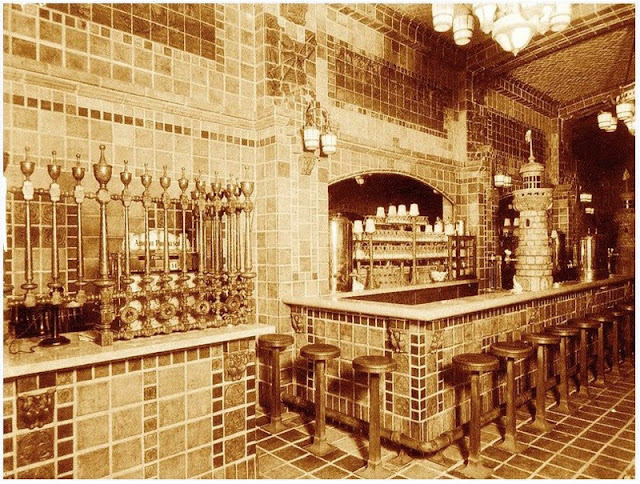 Here's a link to some of the restored tiles:
http://countdowntobatchelder.com/