Robert Pinart was an active stained and dalle de verre glass artist and designer for over fifty-five years--from the late 1940s until 2008, and he claims he never retired. He completed about one hundred fifty stained and dalle de verre glass commissions across the country including about twenty windows in the National Episcopal Cathedral, and has had his work included in many exhibitions of architectural stained glass. In 1993 Pinart received the very first Lifetime Achievement Award from the Stained Glass Association of America and had been selected as one of the inaugural ten Senior Advisors for the American Glass Guild. (http://www.michiganstainedglass.org/collections/studiosartist.php?id=17-82-47)

In 1954 Life magazine published an article about French expatriate artists in New York: “a postwar generation of French artists interested in New World opportunity have been quietly heading for New York where they have taken up their Left Bank lives.” ("A Left Bank in New York”, Life, Vol. 37, No. 17, October 25, 1954, pp. 123-124, 126) One of those featured was Robert Pinart (b. 1927, Paris), a stained glass artist, who, at that time, worked for the design firm Rambusch Decorating Company, which made windows for churches throughout the United States.


Prior to emigrating to the United States in 1951, Pinart “received his stained glass training in the studios of three well known French stained glass artists: Max Ingrand (1908-1969), Auguste Labouret (1871-1964), and then he free-lanced for Jean Barillet (1912-1997). These studios were involved with the post-World War II movement to restore 13th to 17th century windows damaged by the war or removed from churches prior to the war and stored in caves. Because of the scope of deterioration Robert received a foundation in stained glass work which was unusual for such a young person. As a neophyte stained glass artist in postwar Europe, Pinart worked to restore the stained glass of the Basilica of Saint Quentin, Northeast of Paris, among others.


“Ingrand, Labouret and Barillet were also on the cutting edge of the post-war modernistic art movement in Europe which they, and others, 'translated' into stained glass. These efforts picked up momentum immediately after World War II as replacement stained glass windows were needed in war torn areas of Germany, France and England. It was this aspect of his instructors -- and the modernist art movement -- that greatly influenced the personal artwork and stained glass of Robert Pinart.” (http://www.michiganstainedglass.org/collections/studiosartist.php?id=17-82-47)

Labouret was an innovator of a new method in making stained glass windows: the stained glass slab partitioned by cement, dalle de verre, in the 1930s. (After World War II various epoxy mixes were used instead of cement, which could create structural problems.) “[Labouret] sought a combination of modern strength and durability with a depth of color found in old glass. The thickness, broken surface and cut edge gives dalle de verre its characteristically rich translucence. The negative matrix area that frames each pane of glass is visually much heavier than the lead in ordinary windows. This characteristic...enriches the color by creating a great contrasting brilliance. This juxtaposition of brilliant color and dark surrounds can be painstakingly achieved in flat leaded glass by elaborately painting or by a combination of etching and painting of flashed glass. Dalle de verre lends itself best to direct and vigorous design. It is a broad medium that, generally, does not encourage copious detail.” (http://stainedglass.org/?page_id=169)

Labouret designed the 240 stained glass windows for the Basilica of Sainte Anne de Beaupré near Quebec City beginning in 1939 and continuing after World War II until 1950. Robert Pinart designed the “Beatitudes” windows in the Basilica, which were made by the dalle de verre process. (Shawn Waggoner, “Renewing Himself...Always: Designer and Colorist Robert Pinart”, Glass Art, Vol. 27, No. 1, January/February 2011, p. 8; and, http://www.sanctuairesainteanne.org/index.php?lang=en&Itemid=201; and conversation with Robert Pinart)  Pinart said that this commission first brought him to Canada, and then to the United States in 1951, where he settled and became a citizen.

Robert Pinart began his career in the United States by first working briefly for the stained glass studio, Payne-Spiers, in Paterson, New Jersey and then working for the Rambusch Decorating Company on 13th Street in Manhattan. He remained at Rambusch from 1952 until 1956. “It was at Rambusch Studios where Pinart gained a background for his future liturgical work. The studio worked on numerous churches and synagogues, and this honed Pinart’s sense of design as he was allowed to decide personally on the width of the lead, the quality of the glass, and then he could add the painted details.” (http://www.michiganstainedglass.org/collections/studiosartist.php?id=17-82-47)


Robert has said that he was grateful to Harold Rambusch, the head of the company, because he gave Robert the freedom to design and paint the glass on his own. Harold Rambusch was open to new ideas, and was influential in bringing a new generation of stained glass artists to the public's attention.

Pinart designed windows for the Church of St. Anselm in Brooklyn, NY; St Edward the Confessor in Syosset, NY; the Shrine of St. Odilia in Onamia, MN; Queen of Angels Church in Austin, MN; and St. Anthony Shrine in Boston, among others, while at Rambusch.

The stained glass windows behind the second floor altar along with the clerestory windows at the St. Anthony Shrine brought Pinart to national attention when his work was featured on a cover of The Architectural Forum in November 1955. Shortly thereafter Pinart left Rambusch and became an independent stained glass artist/designer.

Robert obtained his first free-lance commission in 1956--designing windows for St. Luke's Episcopal Parish in Darien, Connecticut as a result of the Architectural Forum cover. Robert continued to design most of the new glass windows in this church over the next twenty years.


His work became known to architects such as Edgar Tafel and Percival Goodman--initially because of the promotional efforts of Jean Nison, and they asked Robert to design the glass for some of their liturgical commissions.

Robert designed the stained glass for the Protestant Chapel at JFK Airport (since demolished) for Tafel,


as well as the stained glass in a number of Goodman’s modern Jewish synagogues in the 1950s and 1960s.


Another of Goodman's iconic synagogue designs was Temple Emanuel in Denver, Colorado. Robert designed the dalle de verre sanctuary windows and Ateliers Barillet in Paris fabricated the windows. In addition, Pinart designed a number of weavings, which were woven by Ed Fields, for the Men’s Chapel. According to one synagogue official, the whereabouts of these are unknown.


Robert Pinart also worked with a number of glass studios such as Cummings, J. & R. Lamb, Jean-Jacques Duval and Wilmark (now Nancy Katz/Wilmark) Studios. These studios obtained liturgical commissions, and would ask Pinart to design the windows depending upon the needs of the church or synagogue. Robert also worked on significant repair and replication commissions, such as a damaged Chagall window in Union Church in Pocantico Hills, New York;

Robert worked in the European crafts tradition that he learned as a young man in the Parisian glass ateliers.


He designed the glass windows after making drawings or maquettes that could be shown to, and discussed with, his clients. 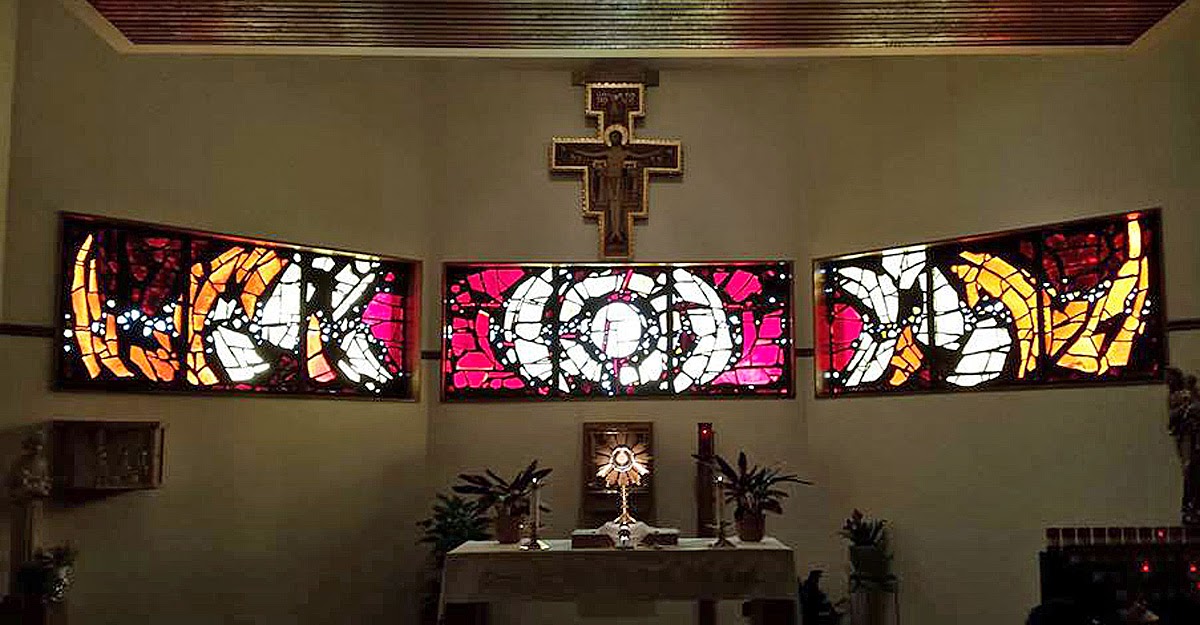 He chose the glass he wished to use, and would even travel to Germany for the very best glass if the budget allowed for it. He would cut and shape the glass, after making a full-size cartoon of the window, or he would allow a glazier he trusted to cut the glass according to the cartoon.

The cut glass would then be attached to clear plate glass with wax, and Robert would paint and stain the glass as needed for the design.


The glass would then be fired in a kiln; either lead cames would be used, or the dalle de verre pieces would be mounted in concrete or an epoxy matrix.

Although Robert Pinart was known for his liturgical stained glass commissions, he also designed stained glass for private residences. However, while his liturgical work has been fairly well documented, documenting a private commission is much more difficult. A few private commissions were mentioned in different lists of Pinart’s work written by various people over the years. Some of these just said “Langford residence” and gave a city or town name. Also, Robert has spoken to us about some of his private work from time to time, but our knowledge is incomplete.

In the late 1950s Pinart and his wife, Jean Nison, designed dalle de verre windows and a tiled altar and baptismal font for the Shepherd of the Hills Lutheran Church in Berkeley, California. While working on that project, they were invited to dinner at the home of a Berkeley architect, Robert W. Ratcliff. There was a broken glass panel between the dining room and a stairway, and Pinart said he could design a new, abstract stained glass panel for the house. Pinart’s panel is still there and much admired by the current owners, the daughter and son-in-law of Robert Ratcliff. (Telephone conversation with Lucy Pope, 08 Dec. 2014.)

After Robert’s ex-wife, Jean Nison, bought a townhouse at 35 Spring Street, Manhattan, Robert designed a three-part window to partially block a view of the street traffic. The two side portions of the window opened to the outside, and there was an outer clear glass window protecting the stained glass. Robert said he thought that Jean had the window removed and stored somewhere in the midwest when she sold the townhouse in the early 2000s. (Recorded interview with Robert Pinart, 11 December 2014) We later learned that the windows were slightly damaged, mainly in the lower right quadrant, during a small fire, and they were repaired by Mark Liebowitz (owner of Wilmark Studios) under Robert's direction.

Our hope for the future is to write a monograph about Robert and the artistic influences that helped his creative process. Included will be a catalogue raisonné of his known work at the time and Robert's comments about many of his commissions and the architects and artists with whom he worked.

Susan and I met Robert in the spring of 2014 when I was writing an article about his ex-wife, mid-century-modern ceramic artist Jean Nison. We went to Robert's home to interview him, and after talking with him, we began to visit schools, churches and synagogues where he designed windows; we researched his art work and recorded interviews with him in order to write a monograph about him. Many of the churches and synagogues throughout the country where Robert was commissioned to design windows, sent us photos of Robert's windows, as well as written material about the commissions. Thus far, we've taken two extended trips to photograph his work in New England and in the Southeast and mid-Atlantic states. Robert has also been very generous allowing us to digitize his slides and glass records and sketches for archiving and publication, and we were given a small archive of material to duplicate that was assembled by Jean Nison. We were also given access to the Rambusch archives by Catha and Viggo Rambusch, and to the Wilmark Stained Glass Studios archives by Mark Liebowitz and Nancy Katz. Other stained glass artists, such as Jean-Jacques Duval, C. Z. Lawrence, and Robert Rambusch, were of great help. More recently, we spent a week at the Rakow Research Library in the Corning Museum of Glass going through the Cummings Stained Glass Studio archives--about 604 boxes of uncataloged material. Cummings fabricated about forty of Robert's commissions.

And another link to a downloadable pdf file for educational/non-profit use only: http://tileresearcharticles.omeka.net/items/show/41.

Some of the places you can see Robert Pinart's windows in the New York-New Jersey-Connecticut area are:

With this article I am broadening the scope of my "Tiles in New York" blog from just architectural tiles, ceramics and terra cotta to also include architectural glass and other architectural ornamentation. This blog, however, will retain its original name and url.