The building that houses the museum, however, did not start out as El Museo del Barrio. The building was conceived by August Heckscher in the early 1920s as a refuge for abused and neglected children. In 1922 the headquarters of the Heckscher Foundation for Children was erected between East 104th and 105th Streets on Fifth Avenue, opposite Central Park.

 The Heckscher Foundation for Children came about because Mr. Heckscher donated the land on Fifth Avenue to the Society for Prevention of Cruelty to Children, and then paid for the cost of the building. It was “...the largest single gift made for the benefit of children in [the] city. And it was this that led to his interest in slum conditions, in his fight to end slums.” (“August Heckscher Dies In Sleep At 92”, The New York Times, April 27, 1941, pp. 1, 41)

"...The building is six stories high with two stories in pent house construction above the roof… . The first story is of limestone and the five stories above of red brick… . In plan the building is H-shaped with a central indentation at the front which forms the entrance court… . The general offices of the Children’s Society occupy the greater part of the main floor. In addition there are several reception rooms for children entering the institution which are decorated with fairy story pictures and there is decorative tile work in the foyers with similar themes.” (“Heckscher Foundation For Children, New York”, Architecture and Building, Vol. LIV, No. 12, December 1922, p. 111)

In 2008 a restoration project was begun to clean, stabilize and move the Grueby murals from the Fifth Avenue entrance of El Museo del Barrio, which now occupies the space, to the 104th Street lobby. El Museo could then “upgrade” and renovate the Fifth Avenue museum entrance and lobby.

One of the conservators described the tiles in the Fifth Avenue lobby as consisting of “...11 central panels (each 2 feet high by 6 feet wide) and 12 side panels (each 2 feet high by 8 inches wide), made of glazed ceramic tiles… . The central panels depict children in allegorical scenes and each side panel shows a single pine tree on a hill. [The panels were made with glazes developed by William Grueby, who worked for the C. Pardee Art Tile Works of Perth Amboy, New Jersey circa 1922, and were installed]...above doorways and interior windows in the main [Fifth Avenue] lobby of The Heckscher Foundation for Children… . Grueby[…]would have transposed the...original sketches onto ceramic panels that were cut into tiles, glazed, fired, and assembled. ...The Grueby tiles are made of coarse tempered, high-fired ceramic. The glazes range from high gloss black to matt blue-black, low gloss yellows, oranges, light blues, pink, and white.” (Sarah Nunberg, “Cleaning Grueby Tile Panels Using Sustainable Methods”, http://www.cac-accr.ca/files/pdf/grueby.pdf)


"The panel of the two little Indians [the middle photo of the top three] shows the surrounding light tiles intersected by the mirror black border. The beige ones have a similar variegated quality as in the new installations, but they do not seem to be the exact tiles used originally. Same with the couple with the baby carriage panel and the dinner table  panel." (Email from Susan Montgomery to Michael Padwee dated 12/5/2012, titled "Re: Heckscher/El Barrio")

"Of course, when I say Grueby they are technically Pardee, as [Grueby] had long since sold out to Pardee. He was still alive when this project was finished and is listed as a "manager" with Pardee. ...he lived in Manhattan and [...may have been] involved at the showroom, but probably not as any kind of hands-on supervisor at the factory. He retained ownership of the still secret glaze recipes for which he received royalties. Maybe he approved glazes before they were shipped out.

"The pool tiles are (were? I don't know if they survived*) definitely Grueby/Pardee... . A photo of the pool with non-slip Sand Gray tiles is shown on p. 21 of the 1928 Pardee catalogue. A couple of newspaper articles claim that this was the 'largest indoor pool in the world.' The trim tiles look black here as well so they are probably Mirror Black." (Email from Susan Montgomery to Michael Padwee dated 12/3/2012, titled "Heckscher/El Barrio")


*[I, too, attempted to discover if the pool tiles still exist, but I could not get an answer to my query. (MP)]

How are architectural art tiles of this magnitude conserved? The 2008 "RFP for the Removal and Conservation of the Lobby Mosaic Murals" from Superstructures Engineers + Architects gives us an idea of the technical history of the original installation and what was required to keep the murals safe during the whole process:

"As part of the new design for the lobby of El Museo del Barrio..., the Grueby mosaic mural panels that adorn the north, east and south walls of the 5th Avenue lobby will be removed and relocated to the south wing of the building. The mosaic panels require cleaning and stabilization prior to deinstallation and conservation and prior to reinstallation." (RFP, p. 1)

The original positions of these panels were documented by Superstructures in the RFP while they were still in place in the Fifth Avenue lobby. (The photos, however, are not clear enough, nor can they be sharpened, to accurately show which panels are where.) 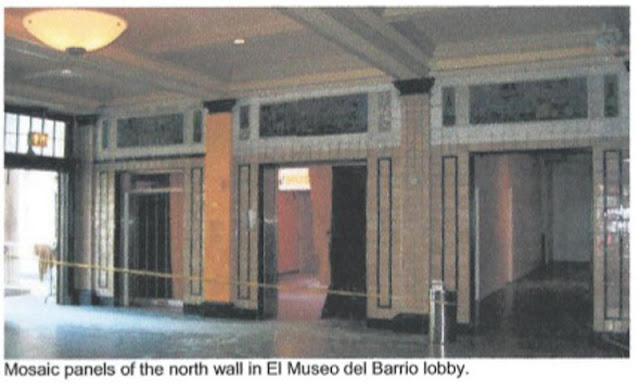 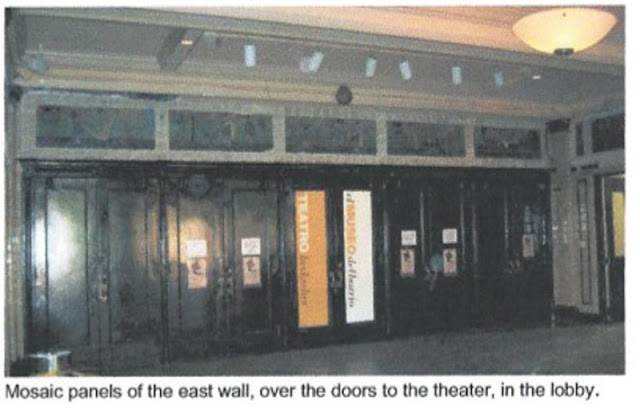 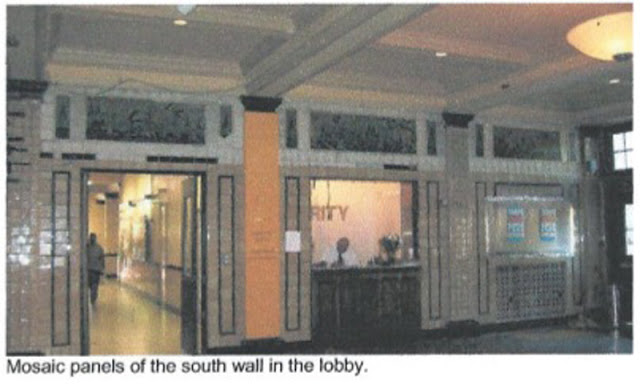 The following photos show the condition of each mural in 2003 and again, being prepared for conservation/removal, in 2007.

The murals, after re-installation, as they appeared in December 2012 and January 2013:

Some of the "story" panels are separated by panels depicting pine trees and/or panels consisting of black-tiled frames. 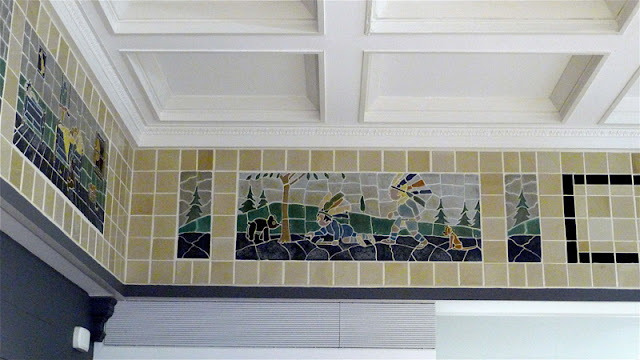 This shows the beginning of the "Boys will be boys" panels. These panels are in the same order, here, as in the 1924 Pardee catalog page reproduced above. (Photo courtesy of Michael Padwee)


There is a contemporary Grueby color chart which illustrates the color palatte from which these murals were derived.

Richard Mohr writes that the "chart appears to present all the glazes that were in play on decorated tiles when Pardee took over Grueby [ca 1919], since the chart illustrates all and only the colors used in the score of custom designed narrative murals that Pardee executed for the 1922 Heckscher Foundation for Children… . [In addition,] in the 1928 catalogue, captions for illustrations of tile installations refer to additional Grueby colors not mentioned on the chart — for example, Holland Brown and Sand Gray; but these were not used on decorated tiles; they were used on what Pardee called “flint tiles.” These were mass produced field tiles to be used for floors, wainscots, and walls. […The color] Hauteville, a tan,...was used as wall and wainscot cladding. For example, it was used as the general wall covering in the lobby housing the Heckscher Foundation murals."


These Grueby tile panels are part of our architectural heritage and have been recognized as worth conserving by El Museo del Barrio. The 104th Street lobby is accessible, and we should all consider it as part of the museum's permanent collection.

I would like to thank Riley Doty, Larry Mobley, Susan Montgomery, Susan Tunick, Richard Mohr, Robert W. Switzer and the Tile Heritage Foundation for their help in the preparation of this article.