Trent in New York--Part I, The Bronx Theatre 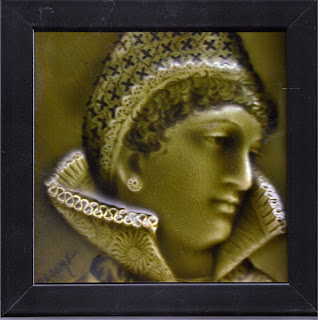 In a September 7, 1909 article in the Trenton Evening Times (p. 1) three new Trent Tile Company installations in New York City were described. Although the installation locations were noted, of the three, not a single tile still exists (https://sites.google.com/site/tileinstallationdb/
where-are-they-now).

The tile installations were manufactured by the Trent Tile Company of Trenton, N.J., which was one of the major producers of art tiles in the United States in the late 19th-early 20th centuries. "The Trent Tile Company was first organized as the Harris Manufacturing Company, c. 1882, but soon changed its name to Trent. By 1892 Trent operated 20 kilns...and by 1910 employed 300 workers. By 1912 Trent ran into difficulty and was placed in receivership. ...The company...was closed...[in 1939]. ...The years prior to World War I, and especially the 1880s and 1890s, were the heyday of Trent's production of art tile. Isaac Broome, who had worked for the Etruria Pottery of Trenton and for the Ott & Brewer Pottery, was Trent's designer and modeler from about 1883 to 1885, when he left Trent to help organize the Providential Tile Works. According to Edwin Atlee Barber, Isaac Broome left enough art tile designs at Trent that many were still being made into the 1890s. Another major artistic influence at Trent was William Wood Gallimore..., an English modeler of portrait busts and vases, [who] came to work at Trent in 1886 and stayed for six years. ...Also, about 1905 Charles Babcock Upjohn, who had worked for Weller Pottery [in Zanesville, Ohio] and the Cambridge Art Pottery as a designer and modeler..., joined the Trent Tile Company." (from Michael Padwee, "The Manufacture of Ceramic Tiles in Trenton-Part 2: The Trent Tile Company (1882-1939)", in Trenton Potteries, the Newsletter of the Potteries of Trenton Society, Vol. 4, Issue 4, December 2003, pp. 1-2. http://potteriesoftrentonsociety.org/publish/Vol%204% 20Iss%204%20December%202003.pdf)


The first of the Trent tile installations mentioned was the foyer of the Bronx Theatre built in 1909 on Melrose Avenue near 150th Street. (This theater should not be confused with the Bronx Opera House built in 1913 on 149th Street near Melrose Avenue and later renamed the Bronx Theatre!) The 1909 Bronx Theatre was designed by William H. McElfatrick (1854-1922), who designed many theaters in the United States and Canada, including the Manhattan and Lexington Opera Houses in New York and the Philadelphia Opera House. (http://www.sah.org/index.
php?src=gendocs&ref=BiographiesArchitects M&category
=Resources) William McElfatrick was a principal in the firm of J.B. McElfatrick and Sons, a firm renowned for its theater architecture. "During the firm's existence (until 1922) it designed about three hundred theaters..., including almost forty in New York." (Marilyn Dee Casto, Actors, Audiences, and Historic Theaters of Kentucky, The University Press of Kentucky, Lexington, KY, ©2000, p. 75)


"The facade of the Bronx Theatre under construction" by the Byron Company
(New York, NY). From the Collections of the Museum of the City of New York (http://collections.mcny.org/C.aspx?VP3=SearchResult_VPage&VBID =24UP1GYQ7VYR&SMLS=1&RW=1261&RH=652).

The Trenton Evening Times stated that "[Following]...a lengthy series of experiments...[, the Trent Tile Company]...has completed one of the first orders in the country for tile in red crystal glazes. ...In the Bronx Theatre the panels [of tiles] of red crystal glazes are to supplant the imported tapestries formerly employed almost exclusively in decorating theatre foyers. The glazes will be fancifully set off with narrow rims of buff and a margin of tile... . The panels in crystal will be three by six feet." Unfortunately, no photos of the tiled interior of this theater could be found.


A more recent and informative article about Trent's crystal glaze tiles was written by Riley Doty ("Trent Tile's Crystal Glazes", Flash Point the Newsletter of the Tile Heritage Foundation, Vol. 12, No. 3 & 4, July-Dec. 1999, pp. 5-6). While restoring two fireplaces in a 1911 house in Berkeley, California, Mr. Doty discovered the crystal glazed fireplace tiles had been made by the Trent Tile Company. Mr. Doty researched the tiles and has quoted articles and ads from The Mantel Tile and Grate Monthly from 1910-1915 which illustrated the attempts of Charles P. Lawshe, the general manager of Trent and a ceramicist, to develop a new irridescent glaze similar to Tiffany's Favrile glass. Lawshe states that the "Crystal Glazes are of many tones, some showing weird, swirling reflections as a moonlight on water with clear, transparent patches among the crystals; others showing hoarfrost as on window panes; and still others, the surface effect of galvanized iron." Mr. Doty concludes "...that Trent, under Lawshe, introduces Crystal Glaze tiles and tries to market them as a 'higher art' line. ...The evidence suggests that Trent's Crystal Glaze tiles were not entirely successful in the marketplace and hence were made for only a few years." The original color photos from this restoration were located by Joe Taylor, the head of the Tile Heritage Foundation, and Mr. Doty remembered that the main colors were blue and yellow/gold, and the colors were a large part of their visual impact. (6-11-2012 email to the author) 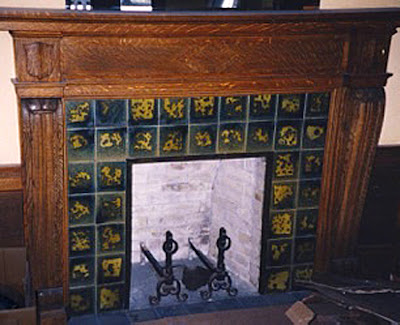 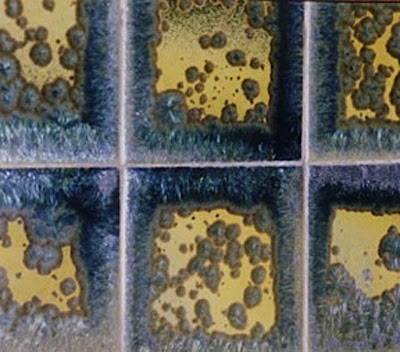 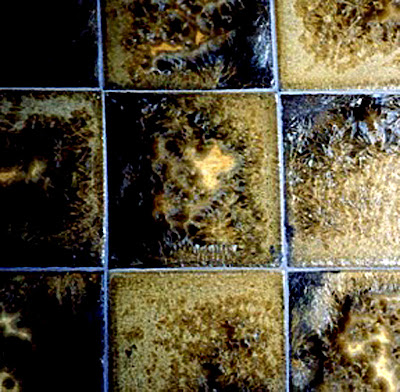 Another installation in Trenton, NJ used the experi-mental crystal glaze tiles--Gaertner's Restaurant, 101-103 W. Hanover Street (no longer in existence). "The wainscoting is 'Jugendstyle' [sic.] in design and is 5 ft. 10 ins. in height. The body is composed of 6x6 tiles, set straight joint in a dense semi-matte sap green glaze: cap, base and liners are in olive green, while the relief 6x9 insert is hand-painted in colors. Alternating with this is a 6x9 plain in a green crystal glaze. ...the frieze runs entirely around the room." ("Floor and Wall Tile", in Brick and Clay Record, Vol. XLIII, No. 7, Oct. 7, 1913, p. 704)


Although I have crystal glazed tiles from other companies in my collection, I do not have any manufactured by the Trent Tile Company. If any readers have examples that I can use here, please contact me.
Posted by Michael Padwee at 11:14 AM
Email ThisBlogThis!Share to TwitterShare to FacebookShare to Pinterest
Labels: architectural ornamentaion, architecture, art tiles, Bronx Theatre, Charles Lawshe, crystal glaze tiles, Gaertner's Restaurant, McElfatrick, Riley Doty, Trent Tile Company, Trenton tiles