The New York Showrooms of the American Encaustic Tiling Company

The American Encaustic Tiling Company, founded in Zanesville, Ohio in 1877, became the largest floor and wall tile company in the country by the time the Great Depression caused its demise in 1935. In the last decade and a half of the 19th century through the 1920s, AET had a major presence in New York City, not just as a producer of floor and wall tiles, but also as a creator of art tiles and tiles used in architecture.
AET had its office and showrooms at various locations in Manhattan during these years. However, after Leon V. Solon became artistic director of the company, he created new showrooms at 16 East 41st Street, Manhattan sometime around 1912. 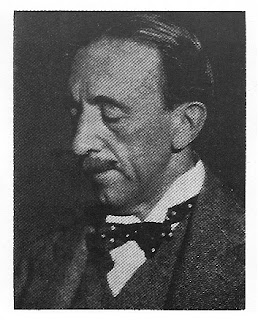 Leon V. Solon was born in England in 1872 "to a family of distinguished ceramic artists at Stoke-on-Trent... ." Leon was the son of "Marc Louis Emmanuel Solon...[who] had been hired in 1870 from the French national factory at Sevres to become head decorator at Minton's. ...Leon's maternal grandfather, Leon Arnoux, had been a highly accomplished ceramist at Sevres when Herbert Minton hired him to be his art director" from 1849-1892. Leon studied "...classical art...[and] was also trained to understand the practical aspects of contemporary ceramics manufacturing. ...In 1912 Leon became art director at the American Encaustic Tiling Co... . ...Leon's role was to direct the overall development of AET's tile lines." (quotes from Riley Doty, "British Tile Makers in the United States: 1910-1940" in Journal of the Tiles & Architectural Ceramics Society, Vol. 17, 2011, pp. 8-11)

In the 1920s Solon re-designed the AET showrooms. According to Regina Lee Blaszczyk, "...Solon designed the American Encaustic offices as a virtual 'Tile Museum', as a showplace for parading the decorative potential of colorful architectural ceramics. ...If the exterior of the...showroom [the building facade] was the epitome of understatement, the building's interior communicated chromatic splendor that must have bedazzled architects and persuaded many to utilize tiles in their installations. ...This main display area, a virtual symphony in distinctive hues of brilliant blues, greens and gold, was Solon's tribute to maiolica potters of the Italian Renaissance. Here, under the watchful gaze of a pair of black lions, probably modeled after the Greek Nemean Lion, Solon negotiated...contracts." (Regina Lee Blaszczyk, " 'This Extraordinary Demand For Color': Leon Victor Solon and Architectural Polychromy, 1909-1939" in Flashpoint, the Newsletter of the Tile Heritage Foundation, Vol. 6, No. 3, July-September 1993, p. 14) 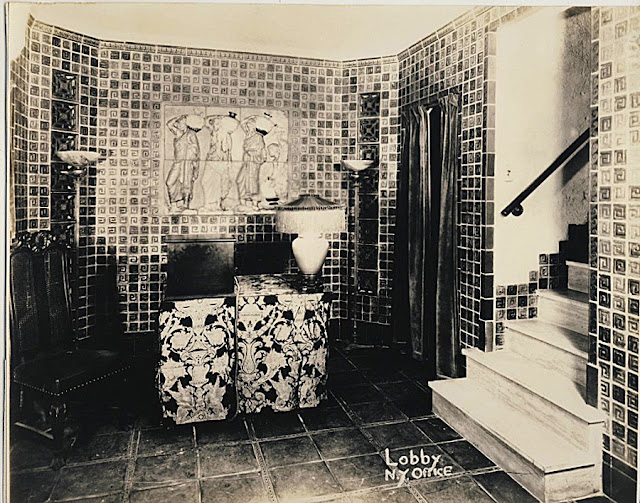 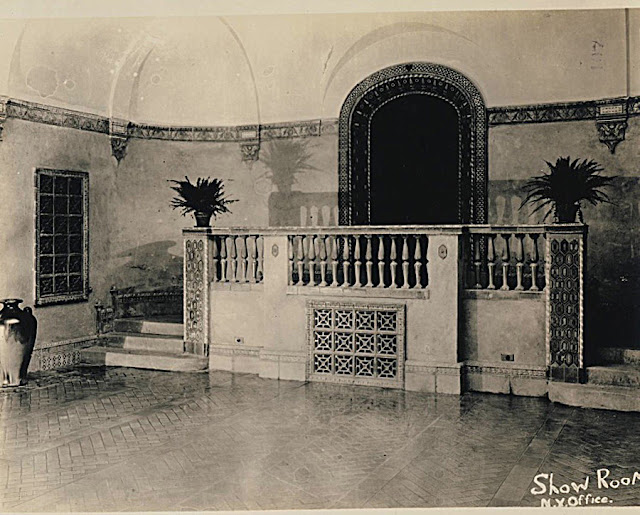 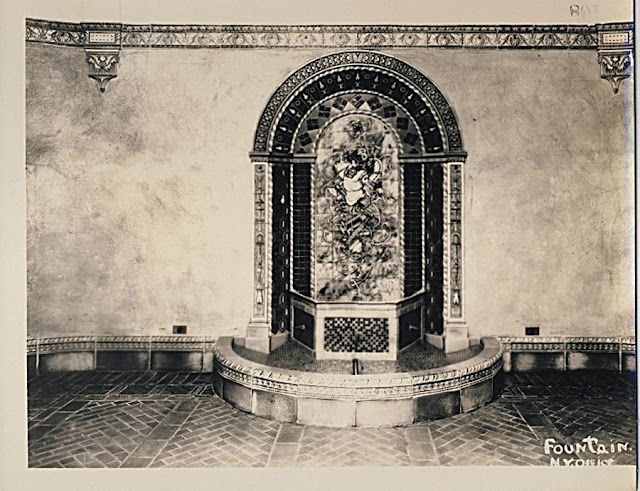 From Leon Solon, "The Display Rooms of a Tile Manufactory", http://tileresearcharticles.omeka.net/items/show/1 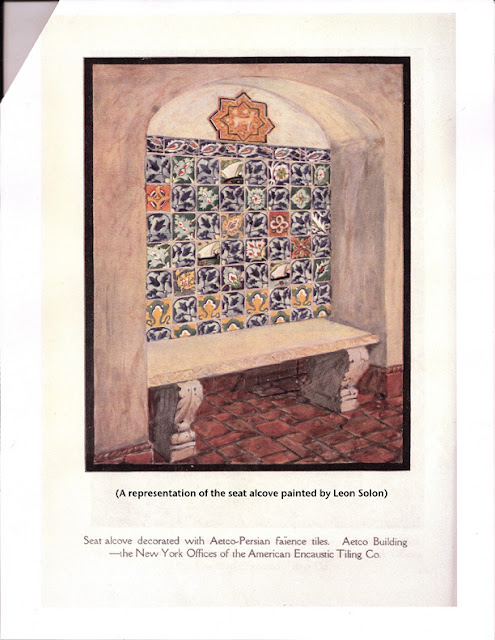 "The entrance corridor is treated with studied simplicity: a dark Delft blue covers the floor, extending a short distance up the walls...terminating in a rope molding. Two...panels by Arthur Crisp are hung on rough stucco walls. ...[The Reception room] walls are covered with 3x3 inch tiles embossed with a simple Greek fret...colored alternately with red, black, and gold...set at random... . The floor is of large blue-green tiles... . One of the Parthenon metopes, reproduced in faience, is inserted in the wall over the telephone operator's desk. ...The grilles are of faience treated with a vermillion glaze. ...The visitor leaves the reception room through a little vaulted corridor, paved with Tuscan red faience tiles laid at random;...a recess...is decorated with American-Persian tiles... . ...The stylistic treatment [of the main display room] is that of the Italian Renaissance... ." (Leon Solon, "The Display Rooms of a Tile Manufactory", http://tileresearcharticles.omeka.net/items/show/1 )

Leon Solon's AETCo art department in New York designed the facade and showrooms using a planned glaze color scheme, which is explained in his article. The street entrance and facade were decorated with polychrome faience, including a bear's head over the entrance.

"In 1927, Solon lamented the 'dull and lifeless buildings of today' and called for increased use of color in skyscrapers. ...At 16 East 41st Street Solon found the opportunity to put such theories into practice. The interior was a polychromed labyrinth of tile art, with majolica fountains, faience radiator grilles, niches, cornices and even ceilings in intensely shaded red, blue, gold, green and other colors. But for the exterior Solon sought a more subdued, neutral character. On a wall of light yellow roughened stucco, he laid out a polychrome network -- deep, burnt umber door and window enframements on the first floor, brilliant blue and gold heraldic plaques at the midsection and cream-and-blue rectangular patterns of square tile at the attic story. ...A company brochure of about 1930 shows that American Encaustic later tiled the ground-floor stuccoed facade with a wildly mottled pattern of small rectangular tiles." (Christopher Gray, "Terra Cotta Magic With a Polychromed Interior", New York Times, "Streetscapes", July 20, 1997. (http://www.nytimes.com/1997/07/20/ realestate/terra-cotta-magic-with-a-polychromed-interior.html?src=pm)

The front door and part of the remaining tiled facade, 2010
(Photo courtesy of the author) 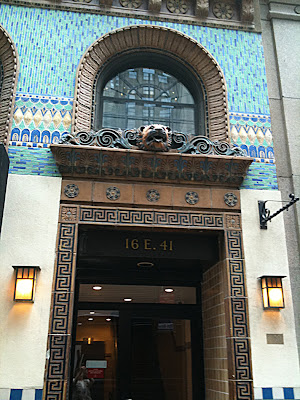 According to Blaszczyk, "Sometime during the 1920s, Solon remodeled his office, on the first floor facing the street, to create another...showcase illustrating the adaptability of American Encaustic tiles to modernistic interiors. Included in this area...were Solon's interpretations of Augustin Lazo's costumes designed for the Carlos Chavez Aztec Ballet which debuted in...1928." (Regina Lee Blaszczyk, op. cit.) Below is one of ten tiles that Solon designed for the Aztec Ballet.

Along with his own tile designs, Solon encouraged other artists to design tile murals at AET. I plan to discuss some of these murals in another post.

Although preservationists tried to have the building landmarked in 1993, this failed. It is believed that most, if not all of the tiled interior of the building has been demolished. Part of the exterior faience has also been destroyed by new tenants/landlords over the years. A restaurant now occupies the first floor of the building, and the two window bays to the left of the entrance have been destroyed.
Posted by Michael Padwee at 9:41 PM
Email ThisBlogThis!Share to TwitterShare to FacebookShare to Pinterest
Labels: 16 East 41st Street, AET, AET Co, American Encaustic Tiling Company, architectural polychromy, architectural tiles, art tiles, Arthur Crisp, Augustin Lazo, Aztec Ballet, Carlos Chavez, Leon Solon