After a power outage at our terminal and a delay of four hours our British Airways flight left Newark at 3:00 AM. We were scheduled to arrive in Heathrow at 3 PM, September 20, thus effectively eliminating anything we would have done during the day of the 20th. Our hotel was the Kensington Rooms Hotel on Cromwell Road near the V&A Museum, one of our "to-dos". I did walk around the area of our hotel taking photos, but there was nothing of real interest until the next day when we went to the Leighton House.
Frederick Leighton (1830-1896) was a painter, traveler and collector of art and antiquities. He first exhibited a painting at the Royal Academy in 1855 which was purchased by Queen Victoria, helping to assure Leighton’s success as a painter. In 1864 he asked his friend, the architect George Aitchison, to design his house (with Leighton) on Holland Park Road.
 During his travels Leighton, who was especially interested in ceramic objects from the Middle East, collected Syrian and Turkish tiles and Iznik ceramics. These he exhibited in his house in a unique way. He created a series of three tiled rooms as you entered the house: the Staircase Hall, the Narcissus Hall and the Arab Hall. Where there were damaged or missing tiles Leighton asked his friend, William De Morgan, to repair, or make new, matching tiles. This work so interested De Morgan, that he was inspired to devise his own “Persian ware” line of ceramics.

The golden frieze just below the chandelier is a Venetian glass mosaic designed by Walter Crane. Most of the tiles were from 16th and early 17th century sites in Damascus. Many were damaged, some were missing, and William De Morgan was called in to work on the room’s interior. The marble mosaic floor in the Arab Room was designed by Aitchison and made by Burke & Co.
After we left the Leighton House, we took a bus to Harrods. Susan remembered--from 25 years ago--that there were tile decorations in Harrods, but when we checked in Lynn Pearson’s book, Tile Gazetteer: A Guide to British Tile and Architectural Ceramics Locations, we could not find any mention of tiles there. We went anyway, and to my surprise, there were tile installations on the first floor. (We don’t know why they weren’t mentioned in Pearson’s book, which is an excellent resource for lovers of ceramics. 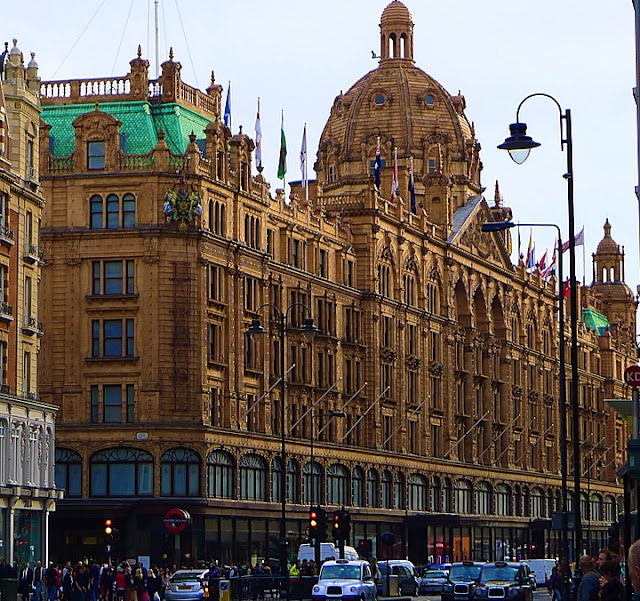 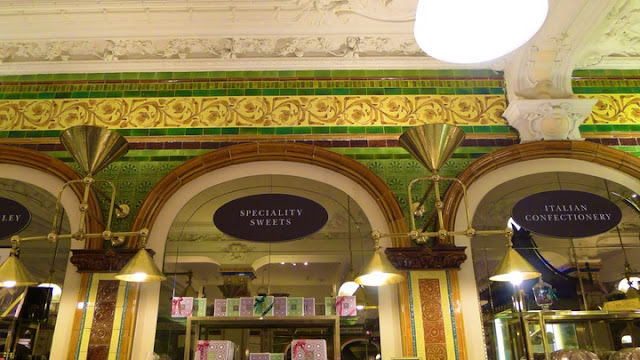 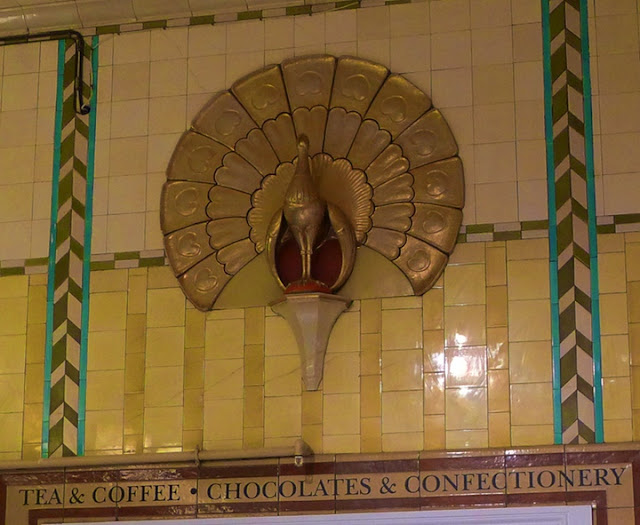 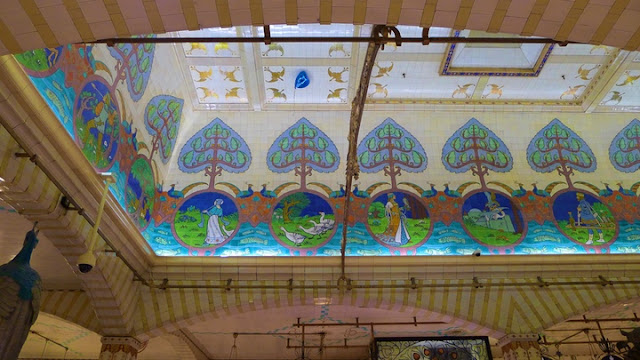 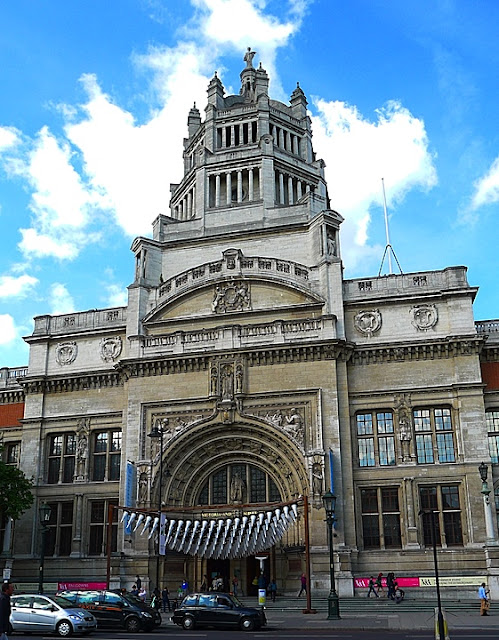 The next day we visited the Victoria and Albert Museum. Captain Francis Fowke designed the South Kensington Museum (the V&A), and construction began in 1860 and continued through 1872. The facade over the main entrance used glazed ceramics on a large scale. "Topping its prominent pediment is a terracotta putto designed by [James] Gamble; the two other high-level sculptural groups were designed and modelled by Percival Ball of Doulton's...  Beneath the terracotta cornice is a ceramic mosaic commemorating the 1851 Exhibition by Rueben Townroe... ." (Lynn Pearson,Tile Gazetteer: A Guide to British Tile and Architectural Ceramics Locations, Richard Dennis, 2005, p. 224) 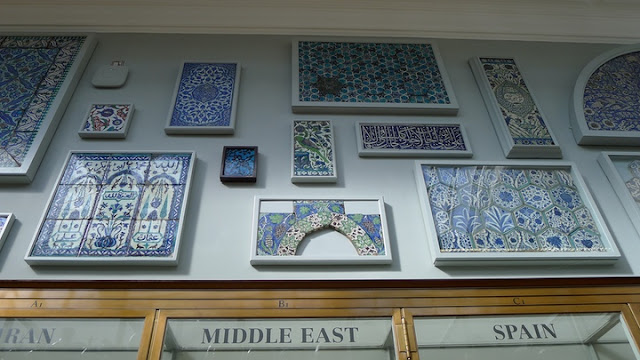 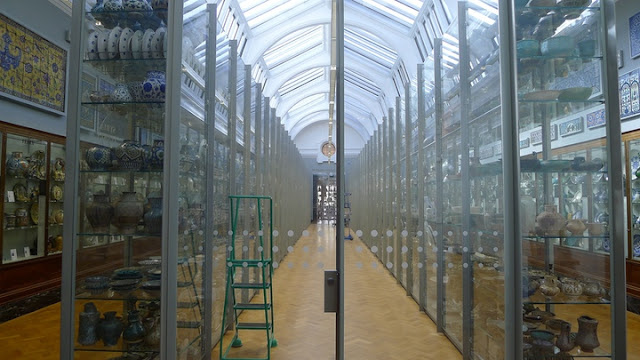 We visited the new ceramics study halls on the sixth floor--like those at the Brooklyn Museum and the Met. 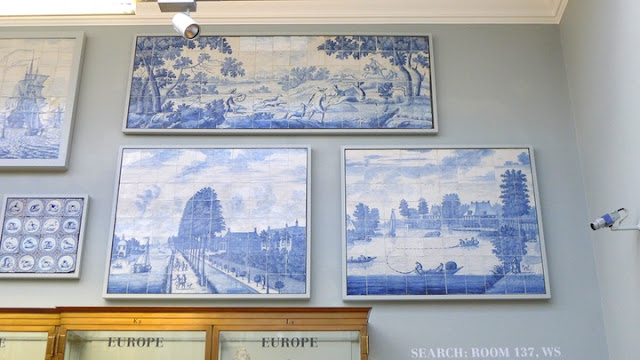 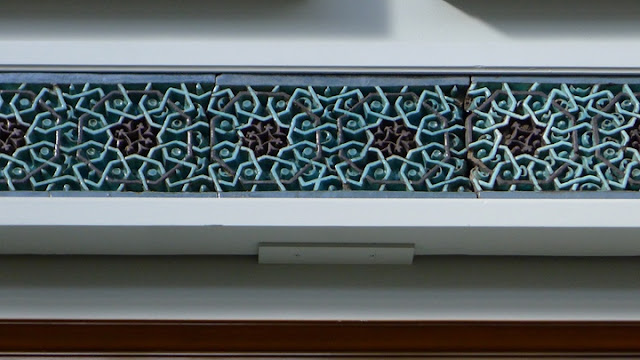 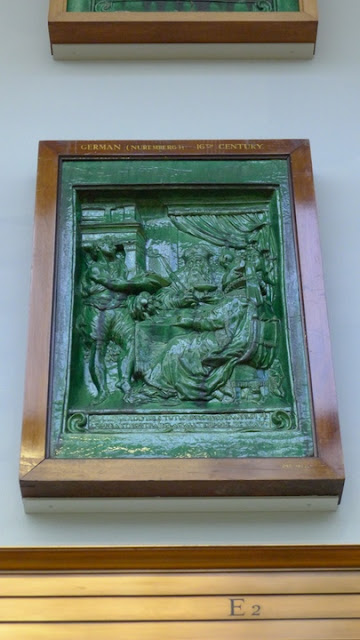