(Since I will be leaving shortly for a vacation in England, which will include tours of the pottery and tile manufacturing districts and a national tile festival, I thought a post about the only U.S. art tile company organized and owned by the British would be appropriate.) 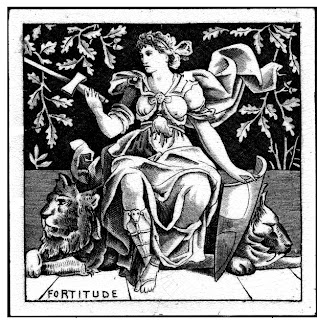 In February 1883 the International Tile Company was organized in New York State, and by late 1883 was producing English-type transfer tiles and molded relief and encaustic tiles at 92 Third Street, Brooklyn--near the Gowanus Canal, where raw materials could easily be off-loaded and tiles could be shipped. According to decorative arts historian Susan Padwee, “...the International Tile Company...was an anomoly.  I.T.C. was the only company organised and financed in England." I.T.C. was organized by sons of the Irish and English nobility, and was the first U.S. company to produce English-style transfer tiles for U.S. consumption. "According to Fred H. Wilde, an English ceramist who worked for I.T.C. for about a year, ‘all presses, dies, and special machinery were brought from England. Many of the workers (all department heads) were brought over, including a printer and engraver’ [needed for transfer tile production]." (Susan Ingham Padwee, “The International Tile Company” in Glazed Expressions, No. 38, Spring 1999, p. 5, http://tileresearcharticles.omeka.net/items/show/20--just scroll down the page and click on the pdf file)  One of I.T.C.'s English artists, for instance, was Samuel Jenks whom the Minton Archives list as born about 1856. Jenks was a student at the Newcastle School of Art in the 1860s.  He was also an apprentice painter/gilder at the Minton China Works from 1870 to 1877. Jenks left Brooklyn NY and appeared in the Fitzgerald's Trenton NJ Directory 1887-1889. From New Jersey he went to Ohio where he died at age 58. (Email from Carol Jenks Apperson to Susan Padwee, 2 Aug 2010, "Re: Samuel Jenks") 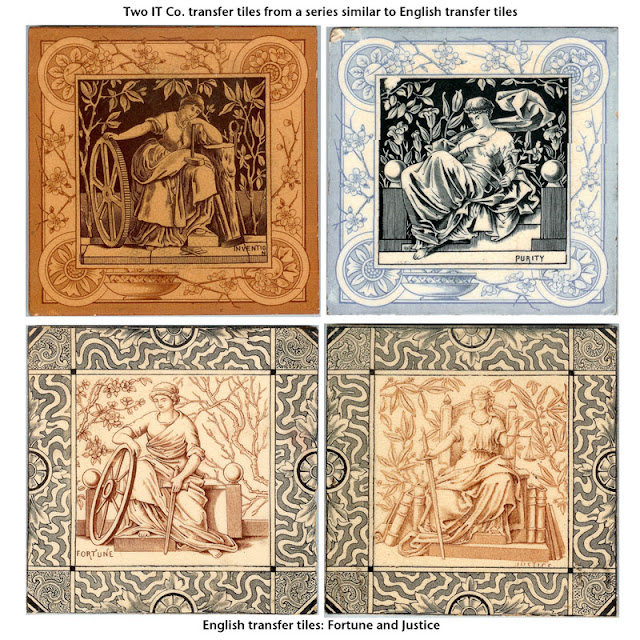 By 1886 the English owners sold the I.T.C. to the owners of the Arbuckle Coffee Company. Although the tile company remained in buisness until about 1891, when its plant was taken over by the New York Vitrified Tile Company, it is possible that I.T.C. did not produce many art tiles after the British left. (Susan Ingham Padwee, p. 6) Thus, the years of art tile production at the International Tile Company were few, indeed. Only between 125 and 150 distinct tile designs are known for this company; no exterior tile installations are known, and few interior art tile installations--such as fireplace surrounds--are known to still exist.

In New York City we know of one building that used I.T.C. colored wall tiles along with those of other companies--the New York Cancer Hospital on West 106th Street and Central Park West, which was built in 1885. I was in that building a few years ago when Olde Good Things Architectural Salvage was taking up the hospital chapel’s encaustic tile floor (made up of Minton tiles) as part of a renovation. I walked around the building checking to see what other tiles had been used and found the I.T.C. tiles. The New York Cancer Hospital was “The first U.S. hospital to specialize in cancer in an age when the disease...[was] considered incurable...[, and it would] be renamed the General Memorial Hospital for the Treatment of Cancer and Allied Diseases in 1899 and innovate [the] use of circular wards to avoid corners that...[were] thought to accumulate dirt and stagnant air… .” (James Trager, The New York Chronology: The Ultimate Compendium of Events, People, and Anecdotes from the Dutch to the Present, p. 206)  The hospital has been re-purposed without the tiles and is now condominiums. The cancer hospital moved long ago to York Avenue (Memorial-Sloan-Kettering). 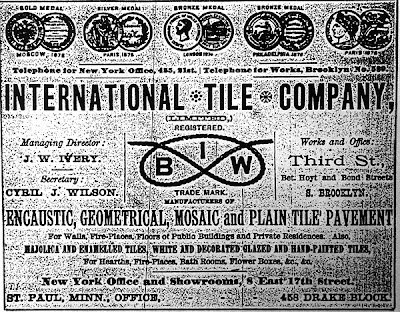 The ads for the Inter-national Tile Company promote its encaustic, majolica, enamelled, decorated glazed and hand-painted tiles. In the ads the company owners, such as John W. Ivery, claimed to have won medals in European exhibitions during the 1870s. “Of the organisers of I.T.C., it appears that only John W. Ivery had previous experience as a manufacturer of ceramics. He had been employed by the ‘Albion Blue Brick & Tile Works’, a company probably owned by his father. The firm was located in West Bromwich, Staffordshire, and produced blue terra-metallic building and fancy bricks, mouldings, coping, foot-path paving bricks, grooved stable floor bricks, vases, and trusses, but no decorated tiles. John W. Ivery apparently had no working knowledge of decorated tile manufacture prior to the founding of I.T.C.” (Susan Ingham Padwee, p. 5--a much more detailed discussion of the organization and products of the I.T. Co. can be found in Ms. Padwee’s thesis, THE INTERNATIONAL TILE COMPANY: ECONOMIC, SANITARY, SOCIAL, AND AESTHETIC ISSUES IN THE DEVELOPMENT OF THE AMERICAN TILE INDUSTRY, Submitted in partial fulfillment of the requirements for the degree Master of Arts in the History of the Decorative Arts Masters Program in the History of the Decorative Arts Cooper-Hewitt, National Design Museum and Parsons School of Design, 1999. Included in this thesis is a catalog of all known IT Co. tiles)

The International Tile Company installations we know about are tiles installed in furniture and fireplace surrounds. The fireplace above is composed of a series of 6” square dragon and grotesque heads tiles produced by the I.T. Company. This fireplace is currently located in Park Slope, Brooklyn, but we also know of another similar fireplace surround that was installed in the DeVilbiss residence in Toledo, Ohio until the house was demolished. (DeVilbiss was the inventor of the DeVilbiss medical/perfume atomizer.)
A spa and B&B in Westminster, Maryland, the historic and recently renovated Roops Mill, had I.T.C., Mintons, and J. & J.G. Low tiles installed in one building during a Victorian era renovation. These tiles were found in a box in the grist mill according to Ricki Chaikin of Reclaimed Relics, LLC, and were featured on a National Geographic "Abandoned" cable TV episode. Some of the dragon and grotesque heads tiles pictured above were tiles that were found uninstalled.

In 1887 the minister of Brooklyn's Plymouth Congregational Church, Henry Ward Beecher, died. Henry Ward Beecher, the brother of world-famous author Harriet Beecher Stowe, was a staunch abolitionist prior to the Civil War, as well as a "social reformer, novelist, essayist and speaker. ...Beecher was also the editor for publications including The Independent and Christian Union. Beecher was...the author of many pamphlets and books that left a lasting mark on the American psyche. This work included Eyes and Ears, Summer in the Soul, Prayers from the Plymouth Pulpit, Norwood, or Village Life in New England, Life of Jesus Christ, Yale Lectures on Preaching, and Evolution and Religion. ...Beecher was very concerned about the spread of slavery into the territories. He used his pulpit as the means of disseminating his abolitionist views. After the Kansas-Nebraska Act replaced the Missouri Compromise, ...Beecher further inflamed the tense situation by sending arms shipments to the partisans he supported." During the Civil War "Henry Ward Beecher demanded that President Abraham Lincoln emancipate all slaves through executive order. After the Union forces retook Fort Sumter in 1865, Lincoln selected Beecher to speak to commemorate the event. Beecher, at that time, was so popular he was viewed as second only to Lincoln in shaping the post-war American identity." (http://www.egs.edu/library/henry-ward-beecher/biography/)
ITC produced a commemorative tile to honor Beecher. “This tile was produced by a technique
known in the nineteenth century as a photoceramic process, patented in Britain in 1886 by Denis Lawless, one of I T C’s stockholders.” (Susan Ingham Padwee, The International Tile Company Catalogue, p. 117 in her thesis, The International Tile Company: Economic, Sanitary, Social, and Aesthetic issues in the development of the American Tile Industry)
"The proprietors of ITC had come to America expecting to find a receptive market for their high-style English transfer printed tiles. Struggling to compete with the extensive American sales networks of the better-known British tile makers, ITC expanded its tile line, and following the example of the Low Art Tile Works [of Chelsea, Massachusetts], began to manufacture relief tiles. Although ITC quality was inconsistent, their best tiles, like the Ages of Man series, rivaled those produced by Low." ("Catalogue Addenda", pp. 5-6 in Ms. Padwee's thesis)
Bertel Thorvaldsen (1777-1844) was born "to poor parents. His father was a carver and immigrant from Iceland. His mother was the daughter of a parish clerk at the village of Lemvig. The young Bertel entered the Art Academy in Copenhagen at the young age of 11 with an unusually bright talent and was educated here as a sculptor until 1793. In 1796 he got the opportunity of travelling to Rome as the Academy’s scholar for three years to be further educated. But he stayed in Rome, received numerous orders and became one of Europe’s best known artists." The early 1800s when Thorvaldsen first became famous, was a time "...close to the French Revolution and the thoughts of new times with freedom, equality and brotherhood for all. ...Art and life were once again to be inspired by Roman and Greek Antiquity, e.g. Classical Antiquity and Classical art. ...Thorvaldsen was early on and artistically very convincingly able to express this fusion between Classical art and the ideals of his time." (http://www.thorvaldsensmuseum.dk/en/themuseum/thorvaldsen)

According to Ms. Padwee, a Rev. W.H. Ford, in a paper presented at the Rembrandt Club on Oct. 6, 1884--“Decorative Tiles, Past and Present”, based upon information supplied by John Ivery--related that the ITC designer, “a Dane, Mr. Otto, was a pupil of Thorvaldsen’s… .” ("Catalogue Addenda", pp. 5-6 in Ms. Padwee's thesis) It is, thus, possible that Mr. Otto was the modeler of ITC’s high-relief “Ages of Man” series. (An internet search, however, could not further identify “Mr. Otto”.)

In the 1890s other U.S. tile companies began to produce transfer tiles. At least one company--the American Encaustic Tiling Company--used some of the same transfer designs as I.T.C. "It is not known if AET purchased the transfer plates from International when International went out of business or copied the design, or both companies purchased their plates from the same source.  It is also possible that many popular transfer tile designs and relief tile molds were taken by workmen, designers and artists who moved from one tile company to another." (Michael Padwee, "The Identification of Antique United States Ceramic Tiles", https://sites.google.com/site/tileinstallationdbal/main_page/the-identification-of-antique-united-states-ceramic-tiles)

"Tiles produced by ITC, like those made by other small regional manufacturers, helped to make the fashion for tiles accessible to less affluent consumers and contributed to the development of an American taste that was distinct from the English style. But, although American tile manufacturers proclaimed that their relief tiles were ‘an entirely new product,’ it was not until the Arts and Crafts movement more than a decade later, that taste and design evolved at companies like Grueby and Rookwood and tiles were produced that were uniquely American.” (From notes made by Ms. Padwee for a lecture at the Victorian Society in New York City in November 2001)

Susan Ingham Padwee's article about the International Tile Company may be downloaded for individual, educational use from: http://tileresearcharticles.omeka.net/items/show/20 (just scroll down to "Files" and click on the pdf document). In addition, some photos of ITC tiles from her collection may be viewed on George Landow's award-winning website, "The Victorian Web": http://www.victorianweb.org/art/design/ceramics/tiles/it.html.