Across from the 97th Street East-West transverse of Central Park sits a six story, Tudor-style apartment house built in 1918 and designed by the architectural firm of Fred F. French Company. This building is a “...distinct departure from the usual type of Manhattan apartment-houses… . Common brick, in shades of dark red, laid up with a three-quarter-inch mortar joint, joins the body color, upon which the gables in stucco and copper-covered half-timbered strips are highly decorative. The sky-line is broken into smaller pointed gables. Light courts divide the Ninety-seventh Street facade into five bays. ...Garden walls of brick and stucco shut off the courts from the street and serve to link the bays… .” (“Two Modern Apartments for City and Country: Fred F. French Company, Architects and Builders”, Architecture, Vol. XXXVIII, No. 4, October 1918, p. 286) The facade, today, is similar to that of 1918.

 In the interior ”The main entrance-hall is graced by a unique fireplace done in Moravian brocade tiles upon a background of cement plaster. A greenish-blue floor-tile gives the key to the color scheme of the hall. The walls have been given a two-toned brushing, in water-color, upon a sand-float plaster finish, and the ceiling is antiqued in old ivory. A rich quality of tone...is obtained by the light through the leaded windows of cathedral amber.” (“Two Modern Apartments for City and Country: Fred F. French Company, Architects and Builders”, Architecture, Vol. XXXVIII, No. 4, October 1918, p. 286)

The Moravian Pottery and Tile Works of Doylestown, Pennsylvania was founded by Henry Chapman Mercer, "(b. June 24, 1856, Doylestown, Pennsylvania – d. March 2, 1930, Doylestown) [who] was an American archeologist, artifact collector, tile-maker and designer of three distinctive poured concrete structures: Fonthill, his home, the Moravian Pottery and Tile Works, and the Mercer Museum." (http://www.amazon.com/wiki/Henry_Chapman_Mercer/
ref=ntt_at_bio_wiki)

According to Vance A. Koehler, the Curator of the Moravian Pottery and Tile Works, "Although hundreds and hundreds of Moravian tile installations were created for various interior and exterior sites in New York City, ...[m]ost NYC dealers and contractors did not disclose the destinations of their orders unless they required "special" work." (Email from Vance A. Koehler to Michael Padwee, 29 Aug 2012, 11:44 AM, "Re: Moravian tiles in NYC buildings")
Although the tiled floor and bottom section of this fireplace exist today, the entrance hall has been renovated and the over-mantle tilework is gone.

Another interior installation of Moravian tiles in New York City is the Henry P. Davison residence (now the Italian Consulate) at 690 Park Avenue (SW corner of 69th Street), Manhattan. This building was erected in 1916* and designed by the architectural firm of Walker & Gillette for Henry P. Davison (1867-1922), one of the founders of the Bankers Trust Company and a partner of J. P. Morgan.
[*Although this is the date given in the 1981 Upper East Side Historic District Designation Report, an article from 1910 discusses this building and its tilework! The residence was remodeled in 1917-1918 by architects Delano & Aldrich and this may be the source of the error.]

The Solarium floor “...is quarry tile, in laid with Mercer inserts. The entire Mantel, Fountain, Flower Stand, Base and Wall are made entirely of Mercer tile. The work was executed by Messrs. Adolf Grant & Co., New York City. The Architects were Messrs. Walker & Gillette of the same city.” (The Mantel, Tile and Grate Monthly, Vol. IV, No. XI, May, 1910, p. 29)


Two other major interior installations of Moravian tile work are the "...rather large installation of tiles and six mosaics in a vestibule in Grace Dodge Hall [525 W. 120th Street] at Columbia's Teachers College that...[d]ates from 1909[...,] and of course, the huge, still-extant pavement with central mosaic created for the Hispanic Society building in upper Manhattan from 1905." (Email from Vance A. Koehler to Michael Padwee, 29 Aug 2012, 11:44 AM, "Re: Moravian tiles in NYC buildings") However, I couldn't locate these murals when I went to Grace Dodge Hall at Columbia Teachers' College and searched for them. In fact, none of the people I asked, who worked there, had ever heard of the murals! The answer was found in Andrew S. Dolkart's Morningside Heights: A History of Its Architecture and Development (Columbia University Press, 1998, pp. 239-240): "The front entrance to the Household Arts Building [now Grace Dodge Hall] is now rarely used. Thus, few people ever enter the vestibule, which contains the building's most significant design feature. For this space, Parish & Schroeder [the architects] commissioned six tile panels..., which were to be set high on the east and west walls, from Henry Mercer's Moravian Pottery and Tile Works... . The designs, on the theme of 'home industries and home work of the Colonial housewife' (sewing, spinning, churning, candle dipping, weaving, and cooking at an open fire) were prepared by students in the Art Department of Teachers College. Each scene was then interpreted in the mosaic tile process that Henry Mercer patented in 1902. The scenes are composed of solid-colored glazed pieces of clay in varied shapes and sizes, bonded by wide mortar joints... . The mosaic panels are surrounded by additional bands of Moravian tile. The floor of the vestibule and the floor and walls of the stair hall located just beyond are clad in tiles made by the Grueby Faience Company of Boston."

[These tile panels are similar to, but not the same as, the tile panels created by Mercer for the Edward Lee McClain High School in Greenfield, Ohio in 1915, a site whose tile work is well documented by Cleota Reed in "'The Silent Tuition of Beauty' For Children: An Arts and Crafts Legacy". (Tile Heritage: A review of American Tile History, Vol. 1, No. 1, Spring 1994, Tile Heritage Foundation, Healdsburg, CA, pp. 2-9) Also, Vance A. Koehler writes that Mercer started making tiles by borrowing and transforming historic designs. He "...patterned his early tiles on models gathered from a large number of sources. As other Arts and Crafts exponents were doing, Mercer turned to the preindustrial past for designs upon which to model his own tiles." For instance, in 1897 Mercer took a photograph of a woman making candles by hand-dipping them. This he transformed into the third tile mosaic in the top panel above in Grace Dodge Hall, and it can also be found in the State Capitol Building in Harrisburg, Pennsylvania. (Vance A. Koehler, "Henry Chapman Mercer, Tile Maker", Flash Point, Special Edition 1991, p. 16)]
There are a number of other buildings in New York City that are ornamented with Moravian tilework on their exteriors. A few are discussed below:


The facades and entrance foyers of 6 to 28 East Eighth Street, Manhattan (with the exception of number 10, which was extensively renovated) and the facades of the buildings of Washington Mews North (just behind the East Eighth Street buildings) are ornamented with Moravian tiles. The buildings on East 8th Street and the North side of Washington Mews were remodeled c. 1916-1917 by the architectural firm of Maynicke & Franke. ("Remodelling Old City Homes" in Architecture, Vol. XXXVII, No. 5, May 1918, Charles Scribner's Sons, New York, NY, pp. 117-124) Maynicke & Franke was founded in 1895 and continued in business after the death of Robert Maynicke in 1913. 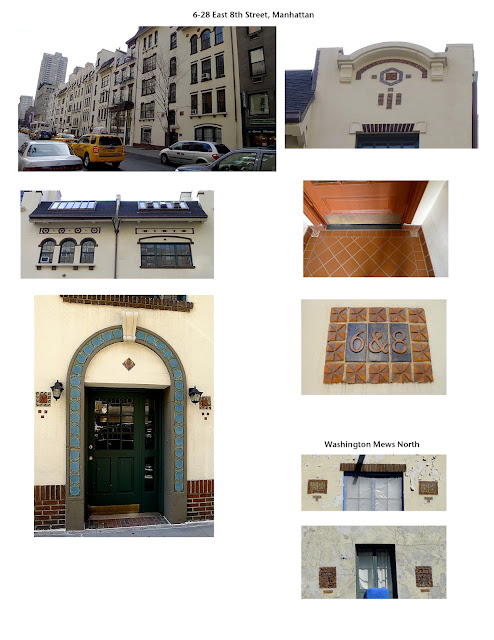 The private home of the architect Frederick Sterner at 139 East 19th Street, Manhattan, which was remodeled in 1908 by Mr. Sterner, made use of Moravian tilework around the entrance to the building. The “town house at 139 East 19th Street was the first building designed in New York by Frederick Sterner, one of the city's most innovative architects. His 1908 complete redesign and renovation of an existing building -- which he did for himself -- was a major achievement for Sterner, then a newcomer to New York, who would go on to bring a touch of color to several of Manhattan's drab brownstone side streets. ...in the summer of 1908 he moved to a block of moldy old brownstones, buying the one at 139 East 19th, between Irving Place and Third Avenue. What to do with mid-19th-century brownstones -- built by the mile, of identical boring design, awkwardly planned and often poorly constructed -- was a subject that puzzled writers at the time… He removed the stoop, covered the dark brownstone with a coat of light cream-colored stucco and replanned the interior. It is now a common approach, but nothing like it had been done in New York before.” (Christopher Gray, “Streetscapes/The Frederick Sterner House, at 139 East 19th Street; An Architect Who Turned Brownstones Into Gems”, The New York Times, June 29, 2003, http://www.nytimes.com/2003/06/29/realestate/streetscapes-frederick-sterner-house-139-east-19th-street-architect-who-turned.html?pagewanted=all&src=pm)

Another Manhattan building with extensive Moravian tile decoration on its facade is 165 West 72nd Street, between Amsterdam and Columbus Avenues. According to the NYC Municipal Archives Photo Gallery, this building was built c. 1910.
This building is part of New York City’s Upper West Side/Central Park West Historic District.

Brooklyn also has a few buildings with tiles made by the Moravian Pottery and Tile Works. One is at 316 Garfield Place in Park Slope--just off Prospect Park West. Built in 1911 "The very fine brickwork is inset with decorative vari-colored glazed tile and colored brick." (From p. 62 of the Park Slope Historic District Designation Report, New York City Landmarks Preservation Commission, 1973.) Another, also in Park Slope, is a group of buildings on Ninth Street between Sixth and Seventh Avenues, 384A-400A Ninth Street. These buildings were built c. 1901 according to propertyshark.com.
Demolished Sites:

According to Vance A. Koehler,  "the billiard room of the New York Press Club had a Moravian tile fireplace with a special tile roundel designed by Mercer in 1909; the tile roundel was salvaged when the building was demolished and that piece is now in our collection... .  I found a very poor illustration of the fireplace in a dealer's ad in Architects' and Builders' magazine in July 1910." (Email from Vance A. Koehler to Michael Padwee, 29 Aug 2012, 11:44 AM, "Re: Moravian tiles in NYC buildings")
The Wetzel Building, 4 East 44th Street, Manhattan

Also, the "Wetzel Building...[at 4] E. 44th Street designed by Hill and Stout, architects...[is another.]  Terra cotta [was] made by The South Amboy Terra Cotta Company, but considerable tile work, including mosaics, plain and decorative tiles and a series of pierced balcony panels, [were] all made by the Moravian Pottery and Tile Works.  A visually stunning building that was often cited for its polychrome effects.  Sadly, long gone . . ."

One site with a Moravian-tiled facade just North of New York City, in Yonkers, was demolished in 2008. This was the Vineyard Avenue Fire Station #2. "According to 'Landmarks Lost & Found,' a book about Yonkers' architecture, Fire Station 2 was built in 1897 and it was designed by Edwin A. Quick & Son. The firm designed many notable buildings in Yonkers, including City Hall, the Good Shepherd Presbyterian Church at 320 Walnut St. and several Yonkers fire houses among other structures."
(http://soyosunset.yuku.com/topic/1236)

To see a photo essay about this building, click here.