The AET buildings are now abandoned in Zanesville, Ohio where this company once reigned supreme in ceramic tile production. The AET showrooms in Zanesville may have once rivaled Leon Solon's New York showrooms, but we only have a poor-quality photocopy of a partial photo of a showroom.

In New York Leon Solon encouraged artists to work in a ceramic medium. Artists, including Solon, designed tile panels and individual tiles from other mediums. This was not new in the art tile industry. Beginning in the 1880s the Low Art Tile Works of Chelsea, Massachusetts, for instance, had a working relationship with members of the "Tile Club". The artist and Tile Club member Elihu Vedder designed a celebratory art tile, which was produced by Low, for the 150th performance of the play "Esmeralda" in 1882.

Even prior to the advent of Leon Solon at AET, large art tile panels were produced under the supervision of Felix Alcan, the head of the AET art studio. One such panel was "a reproduction in [mosaic] tile of the famous old German painting 'Cupids Bearing the Crest.' There are about 23,000 separate pieces of tiling in the work and the cost...is said to [be] $5000. There are nine cupids in the panel. Each wears a garland of flowers and they are bearing a crest or crown into a sky of pale blue, which is dotted here and there with small, fleecy clouds, making a beautiful background. The features of the cupids, even to the coloring of the eyes and the dimples in their cheeks, is brought out perfectly...and, at a distance, under proper lighting conditions, the panel looks like an oil painting." (Quoted from The Mantel Tile and Grate Monthly, Vol. 2, No. 11, May 1908, pp. 29-30) Sadly, there is no image of this lost art tile panel.
The artist Arthur Crisp designed at least two art tile panels for Solon which were produced by AET and exhibited by the New York Architectural League. (Solon was very much in favor of polychromed, artistic tilework being used in architecture, and he wrote a series of articles explaining his theories, "Principles of Polychromy in Architecture", which were published in 1922 in the Architectural Record.)
The first of Crisp's panels was titled "Two Green Elephants" and showed two elephants facing each other carrying baskets of flowers; there was a tree in the center of the panel with two fancy birds sitting on bottom branches and other birds on the top branches. The panel consisted of 40 tiles arranged in 4 horizontal rows of
10 tiles each. We are not certain of the size of the panel; each individual tile could have been be 6”, 8”, 9” or 12” square. But, if the tiles were 6" square like the other panel, this piece would have been 5 1/2' x 2 1/2'. 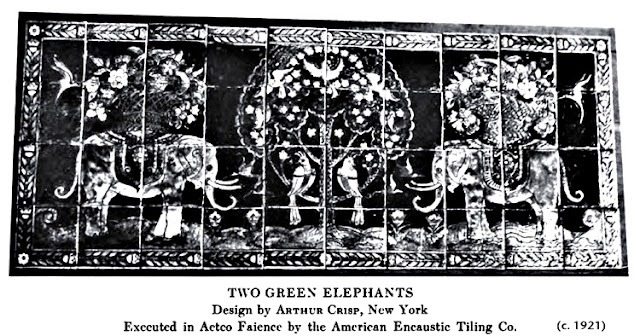 The other panel, "The Sacred Dragon" depicted a Chinese dragon facing true left. This panel was approximately 8' long x 2' high and consisted of 64 tiles--6” faience tiles, arranged horizontally in four rows of 16 tiles.  (Descriptions and images from: "The Architectural League of New York and Its Relations to Crafts and Manufactures" by H. Van Buren Magonigle, The American Architect, Volume 121, No. 2387, Feb. 15, 1922, pp. 166-167 and Year Book of the Architectural League of New York..., Vol. 37, 1922)

Leon Solon, himself an artist, also designed a number of art tile panels for AET. Some were reproduced in architectural magazines or as ads, others were exhibited in his AET showrooms in Manhattan.

One of Solon's panels was titled the "Sun God". This panel was created about 1915 and its size is not known. "The very interesting composition, Sun God panel, has been exhibited by the Architectural League, but has not been reproduced in any art magazine before. The possibilities of such faience decoration are more apparent when the colour scheme is seen, and that unfortunately dees not appear in the half-tone. The jewel-like quality of the tile mosaic against a dull red background gives a most harmonious result, and should be seen by every architect of taste. The Sun God panel is derived from the Maya Art, examples of which still remain in Yucatan." (The International Studio, Vol. LVII, No. 226, December 1915, John Lane Co., New York, “In the Galleries”, pp. LXVI, LXVIII)

Solon designed a tile panel of a trident-throwing warrior,  which is only known because it was featured in color on the January 1919 cover of The Architectural Record (Vol. XLV, No. 1, Serial No. 244).

Two panels which were most probably designed by Solon when he first became the art director of AET, still exist on a building facade at 2840-2844 Atlantic Avenue, Brooklyn.

In 1924 the Borden Dairy Company purchased this building, and the panels fit in with the products of the building's new owners. (The New York Times, Feb. 1, 1924) These may be the largest existing AET art tile panels in the United States, but they were only protected by the good will of the building owner, who has recently died. These are two tile panels, each consisting of 68, 6", 9” or 12” square tiles. If each tile is 6" square, then each panel is 2 1/2' x 7'. The panels are polychromed, high relief, majolica tiles; 5 tiles across by 13 down with 3 tiles in a bottom 14th row. The panels are situated near the top of the building and are separated by three large windows. A request for evaluation for landmark status was sent to the Landmarks Preservation Commission on July 6, 2012. Update: July 12, the LPC staff will review my request and material. 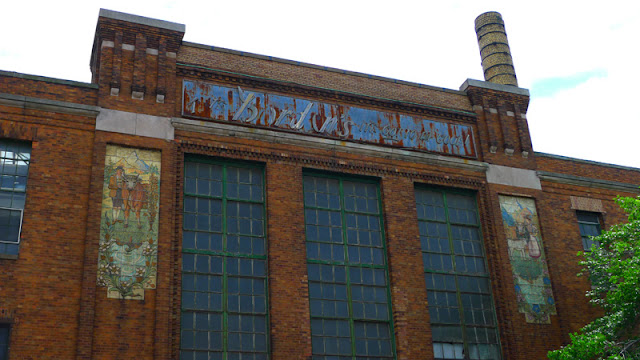